The Ups and Downs of Hanoi

Getting to Hanoi, Vietnam from Luang Prabang would have been a quick one-hour flight if we were real ballers and had been able to afford the $150 flight. But that would have been too easy. Instead, we took an overnight bus for around $50. We were told by the travel agency that it would take 24 hours, but in reality it was much, much longer.

At first, I was kind of excited by the design of the bus--it was something I'd never seen or heard of before. It was a sleeper bus, and that was an accurate description. The seats reclined almost fully, and it was impossible to sit in a chair-like position.

There were three rows (really columns) of seats and two layers (above and below). Monica and I grabbed window seats. 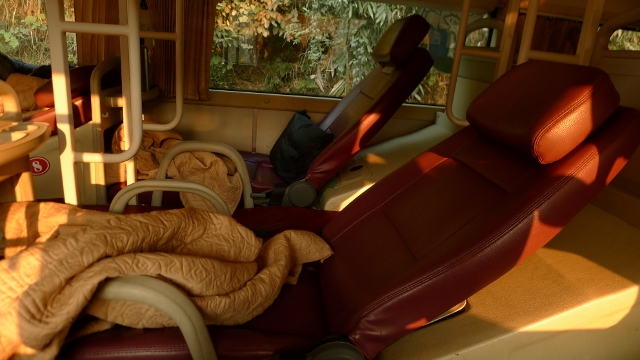 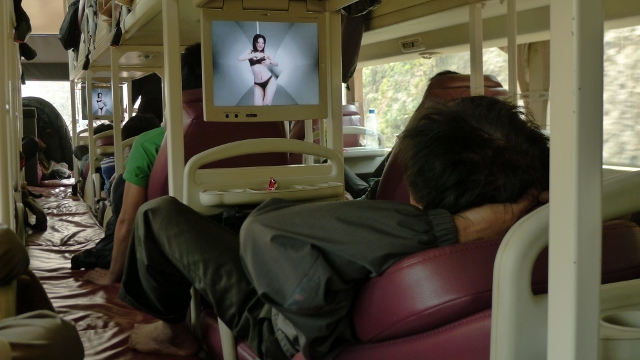 There were no bathrooms on the bus, but it stopped often for (what I'm assuming were) drug deals and an importing/exporting side business, so many passengers took advantage of those stops as bathroom breaks (on the side of the road).

We left Luang Prabang around 6:00 p.m. and made it to the border of Vietnam around 5:00 a.m. Unfortunately, the border didn't even open until 7:00 or 8:00, so we all just waited around for a few hours. It was another long, arduous crossing, even though we already got our Vietnam visas in San Francisco.

The bus stopped for lunch at some very local place. Eventually we figured out how to order. We got the set meal, which included rice, a green vegetable and some sort of meat. Monica and I figured it was dog so we didn't eat it. We crossed the street and I bought some moon pies (called "Nice") that got me through the day on the bus.

I was thirsty but decided not to drink anything because I didn't want to have to pee and deal with stopping the bus and peeing in plain sight on the side of the road, etc. Plus the lady in charge was so mean. She yelled at Monica in the middle of the night because she wanted to throw away her back of vomit and the lady didn't understand her, so I didn't want to have to deal with her.

Around 6:00 p.m. the following day, we pulled into a big bus station. It was the 24-hour mark, so I was assuming we were in Hanoi because I hadn't been following along on a map. To my dismay, we were at least six hours away from Hanoi, and we had to switch buses. The new bus smelled really bad because it hadn't been cleaned from the last group of people on it, and they loaded it over capacity. People were sitting in the aisles, but didn't seem to mind because they probably paid a minute fraction of what Monica and I paid.

People were pushy when getting on and off the bus and any American would agree plain rude. Passengers were shouting at one another from across the bus and on the phone (having normal conversations, not angry). I took a video to prove the term "shouting"--I don't get it. I have a theory that this vicious cycle begins at birth when one's parents talk at loud volumes, thereby diminishing the child's sense of hearing. The parents are almost deaf so they can't hear the child unless (s)he screams, so the child learns to shout instead of talking. Eventually the child is near deaf, has a kid and the cycle progresses. Another influential factor in ever-increasing deafness must be the sound of the constant traffic horns.

We went to another rest stop with questionable meat, so Monica bought a couple pieces of bread for us to eat and two oranges. The bathroom situation was the worst I'd experienced yet. I described it in a previous blog post--it was basically just a tile floor with a couple walls around it. You went in there with a ton of other ladies, did your business on the floor, and tossed your toilet paper down on top of it (if you chose to use any). There was a drain at one corner, but no water for rinsing it down. Also, there were men peering over the top of the walls.

By this point I was ready to cry, but I stayed strong and crawled back into my hole at the back of the bus and put in my headphones for the remaining hours of the trip.

We made it to Hanoi in one piece around midnight and split a taxi to the hostel with a couple who was on our bus. I'm glad we didn't have dinner plans.

My friend Daniel was meeting us at the hostel, and was supposed to arrive around 10 p.m. but he hadn't checked in yet. I stayed up until about 3 a.m. and then crashed. His flight was delayed and he got in late, but we found each other later that morning.

Stepping outside the hostel around 10 a.m. on a Saturday was our first taste of the chaotic Hanoi city streets. We set out on a free tour of the Old Quarter, sponsored by our hostel: Hanoi Backpackers Hostel.

Laying on the ground was a crumpled 500 VND (Vietnamese Dong) note, the equivalent of about 2.5 U.S. cents. This might be the only time I've seen one of these bills. No need for a change purse in this country. 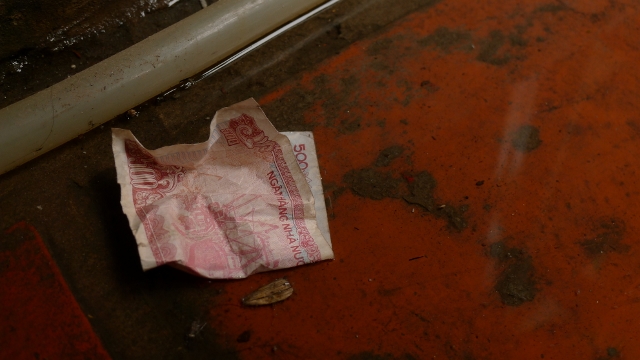 A few street photos to capture the vibe: 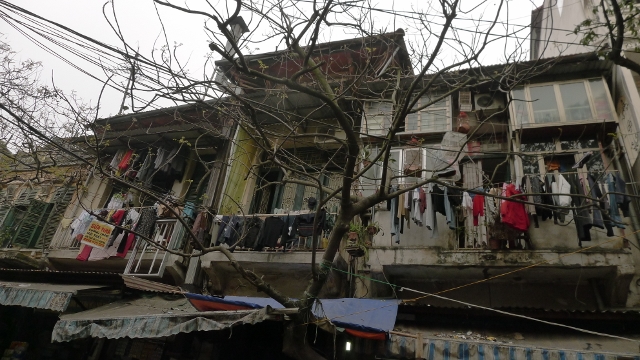 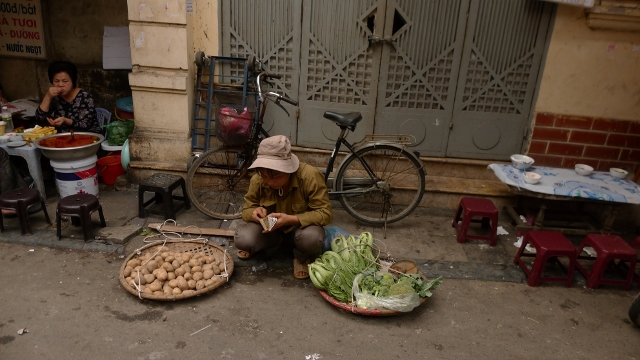 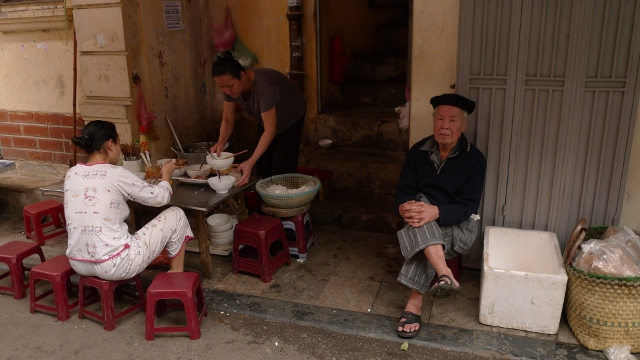 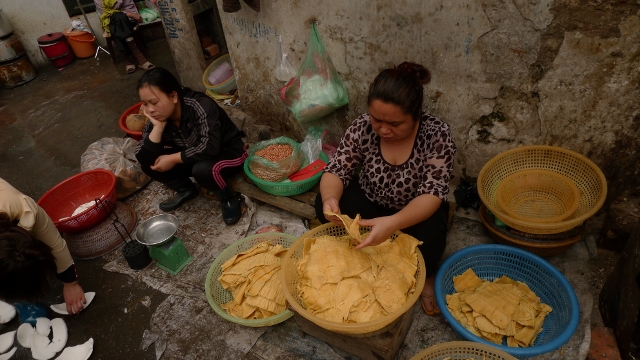 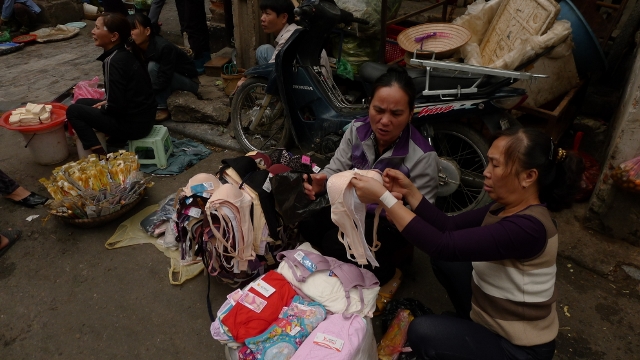 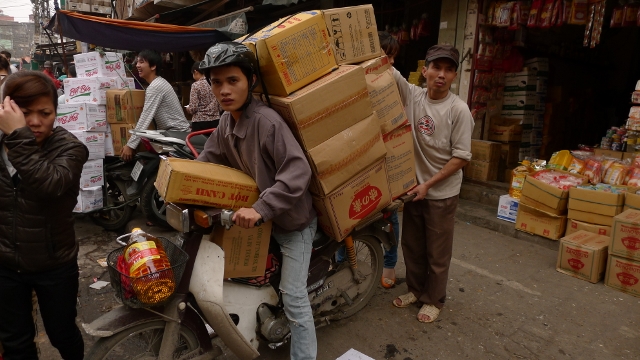 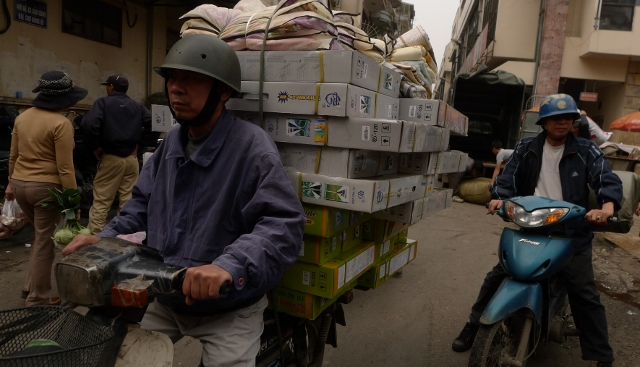 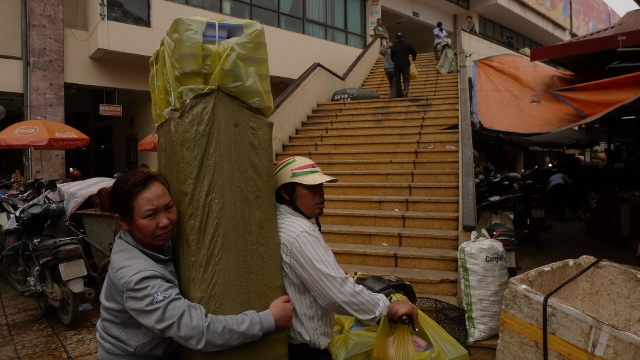 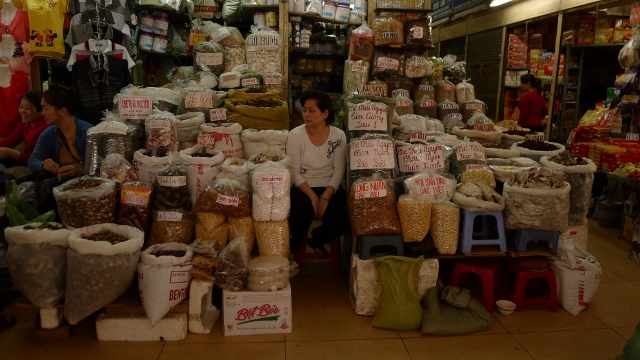 Vietnam is famous for water puppet shows, so we went to one on our first day in town. Daniel and I fell asleep during parts of the performance, not necessarily because it was boring. 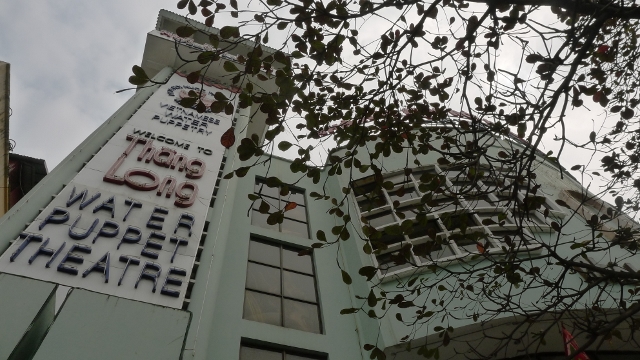 We started walking around the lake in the Old Quarter and a Vietnamese college student started a conversation with us, very casually. She wanted to practice her English, so we talked with her as we circled the lake. She was a very enthusiastic girl and at the end of our conversation, I gave her my email address. Later that night, I received a long email from her--I guess I have a new pen-pal. 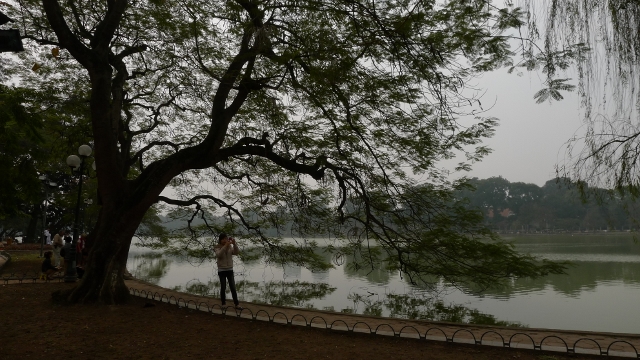 Lots of couples take wedding photos around the lake. We saw at least four on our stroll. 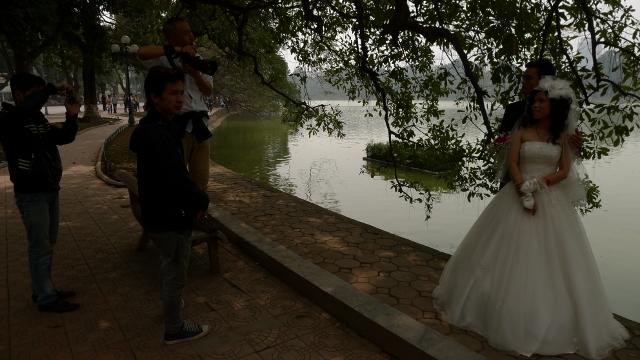 Daniel and I walked around the neighborhood at night, discovering that people enjoy hanging out on the streets just as much when the sun goes down as during the day. I asked to take a photo of some people eating dinner with a cool lamp that reminded me of the anglerfish lighting their table. Not only did they say "yes" but they invited Daniel into the photo and gave him a shot of rice wine. 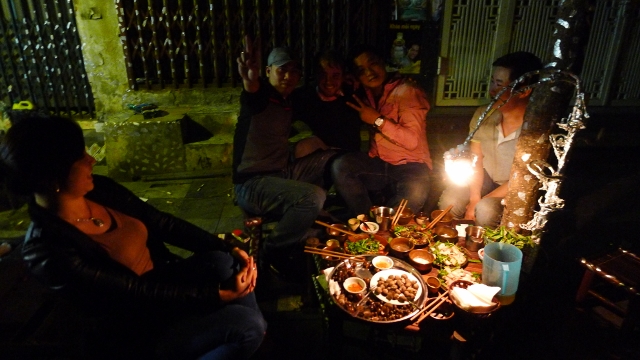 Layers upon layers of motorbikes. Notice how they cover the sidewalk. 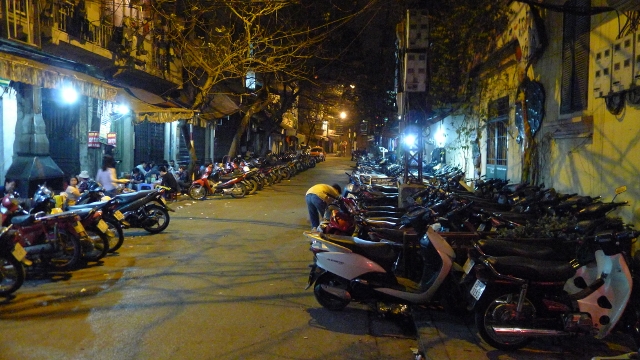 The traffic in Hanoi is the worst I've experienced yet. For some reason, witnessing chaotic streets in Lima, La Paz, Buenos Aires and Bali had almost no effect on me, while the traffic in Hanoi fills me with anxiety and anger. First, there aren't any sidewalks, but we're used to that. Second, smaller vehicles yield to larger ones with pedestrians at the bottom of the food chain (the only rule). As a pedestrian, you are constantly trying to avoid being hit by turning motorbikes and cars barreling through intersections. Are there traffic lights? Why, yes, occasionally there are, but instead of stopping at a red light, it's perfectly normal to honk your horn a couple times and pass right through. Fun! Also, there is such a steady stream of traffic that you won't get anywhere if you try to wait for a break. Instead, you must just go. Walk slowly through the intersection as if there is nothing coming your way, and people drive around you. Scary!

We went to the Vietnam Ethnology Museum and learned all about the different hilltribes of Vietnam (good preparation for our hilltribe trek). Outside the museum were a few traditional houses you could walk inside. I would definitely recommend this museum. 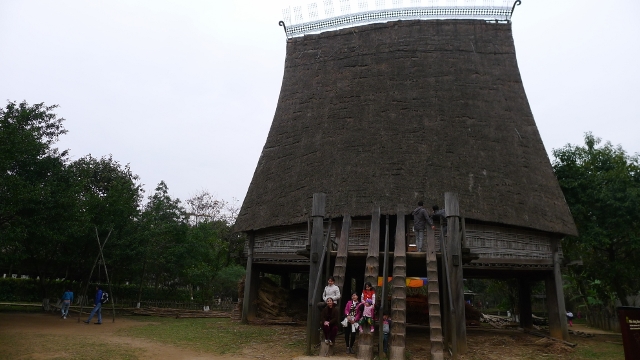 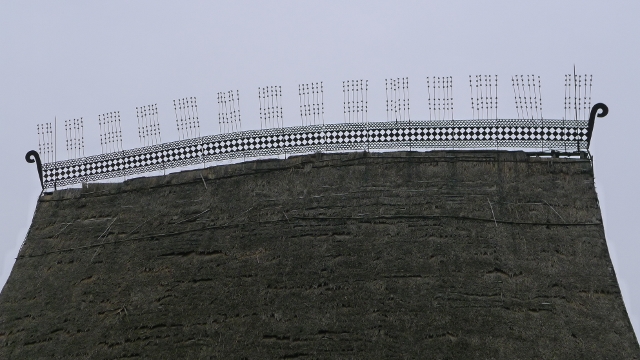 By this part of our trip, we've visited other parts of Vietnam and have had better experiences than our stay in Hanoi. More later...
by anne