We hired a tuk-tuk driver to take us to Choeung Ek, one of the 300 or so "Killing Fields" in Cambodia, about 15 km outside of Phnom Penh. Our driver then took us to the Tuol Sleng Genocide Museum inside the city. It was a tough day taking in so much history of the brutal Khmer Rouge regime, but it was an incredible learning experience.

The Khmer Rouge communist regime ruled the country from 1975 to 1979, under the leadership of Pol Pot, sometimes referred to as "the Hitler of Cambodia." The regime arrested and eventually executed almost everyone suspected of connections with the former government or with foreign governments, as well as professionals and intellectuals, targeting specific ethnic backgrounds, such as Vietnamese, Thai, Chinese, Christians, Muslims and Buddhist monks all living in Cambodia.

It is estimated that approximately 2-3 million people were killed (out of a total population of 8 million Cambodians at the time). 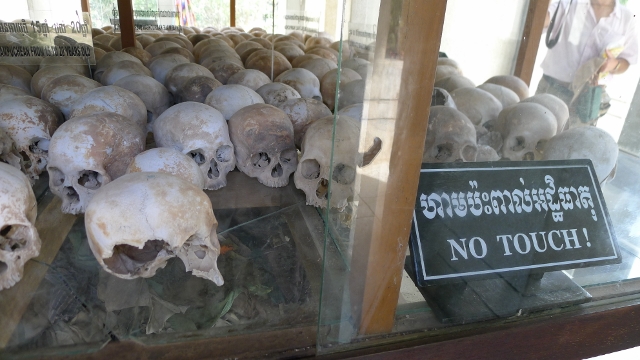 Japan bought the site of Choeung Ek from Cambodia and runs the museum and tours of the area. We paid a little extra to have personal headset audio guides (in English) leading us around the grounds. 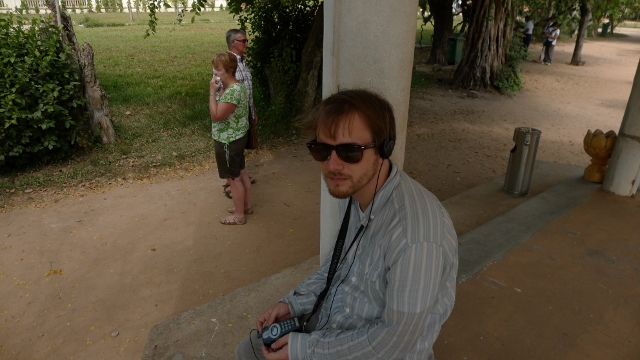 The recording explained that people were forced to confess to Angkar (the government of Cambodia under the regime) their "pre-revolutionary lifestyles and crimes," which usually included some kind of free-market activity; having had contact with a foreign source, such as a U.S. missionary, international relief or government agency; or contact with any foreigner or with the outside world at all, being told that Angkar would forgive them and "wipe the slate clean." [Wikipedia]

This really meant being taken away to a place such as Tuol Sleng or Cheoung Ek to be tortured and/or executed.

To save ammunition, the executions were often carried out using poison, spades or sharpened bamboo sticks. In some cases the children and infants of adult victims were killed by having their heads bashed against the trunks of Chankiri trees. The rationale was "to stop them growing up and taking revenge for their parents' deaths." [Wikipedia]

They buried the victims in mass graves. 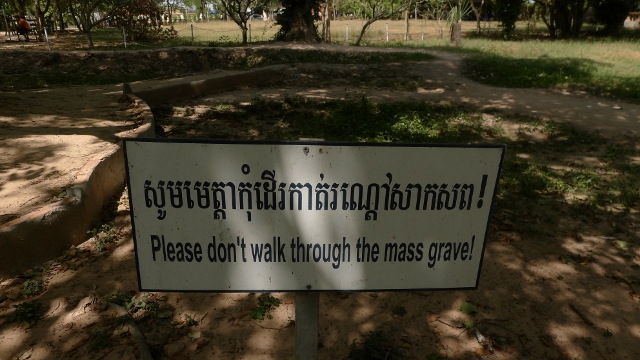 Bones and clothing often surface after heavy rainfalls. Sometimes visitors come across these while touring the memorial park. If found, people turn them in to guards and they are collected. 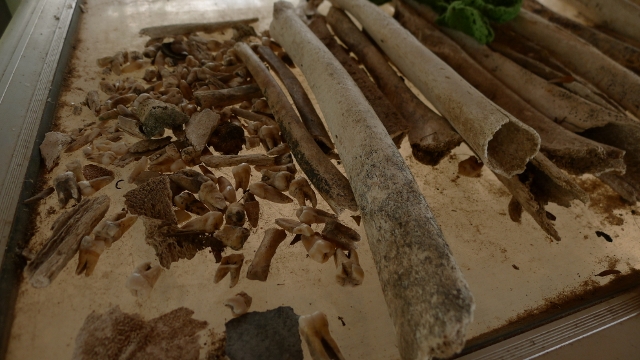 There was also a museum on the site with further information and displays.

The term 'killing fields' was coined by Cambodian journalist Dith Pran during his escape from the regime. A film was made in 1984, The Killing Fields, which tells his story and how he escaped the death camps. I haven't seen it yet, but I want to.

If you go, I highly recommend paying a little extra for the audio guide. I thought it was very well done, including not only factual historical information, but also personal stories and a couple of very poignant songs and melodies related to the events.

We left Cheoung Ek but we weren't done learning about the atrocities of the Khmer Rouge. Next we visited the Tuol Sleng Genocide Museum. 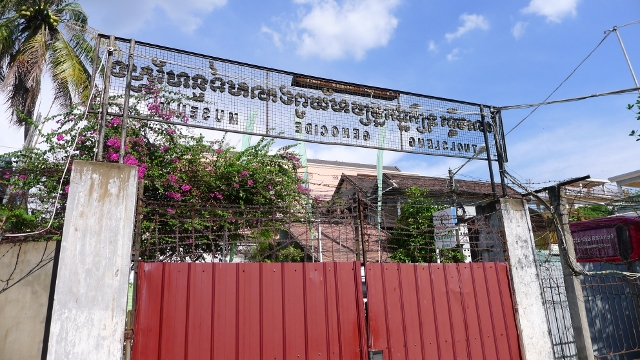 The current museum buildings used to be a high school until 1975, when the Khmer Rouge regime turned it into the Security Prison 21 (S-21).

The former classrooms were converted into prison cells and torture chambers. The buildings were encased in electrified barbed wire and the windows were closed in with iron bars. 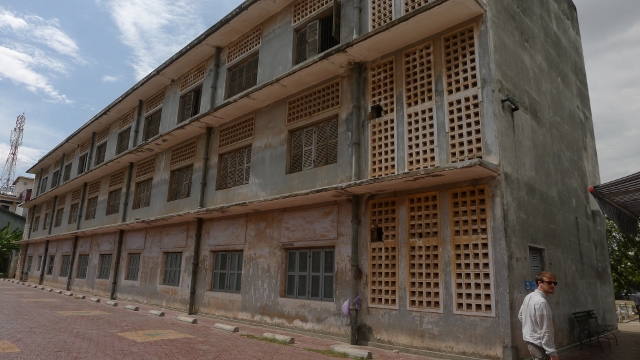 An estimated 17,000 people were imprisoned (and eventually executed) at Tuol Sleng (the actual number is unknown). 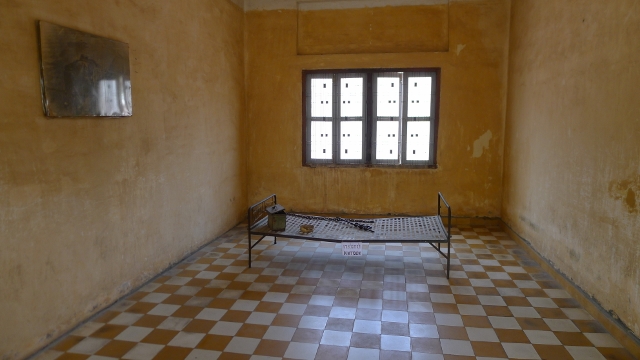 Prisoners' families were often brought into S-21 to be interrogated and later murdered at the Choeung Ek "extermination center."

The site has four main buildings (A, B, C , and D). Building A holds the large cells, for special prisoners. Building B holds galleries of photographs of the prisoners that were taken when they arrived at S-21. Building C holds small prison cells, one floor made of wood dividers, and the other brick. Building D holds instruments of torture and a Buddhist sanctuary. 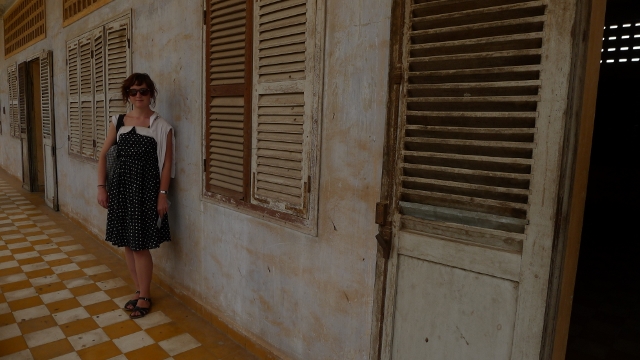 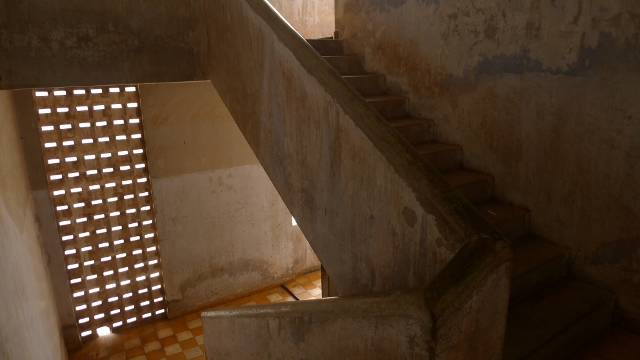 Below is one of the torture devices the staff used on the prisoners. They would hang the victims upside-down by their ankles with a rope and lower their heads into large jugs filled with water. The prisoners would eventually pass out from being upside-down for so long, and the staff would lower them again into the water to wake them up. 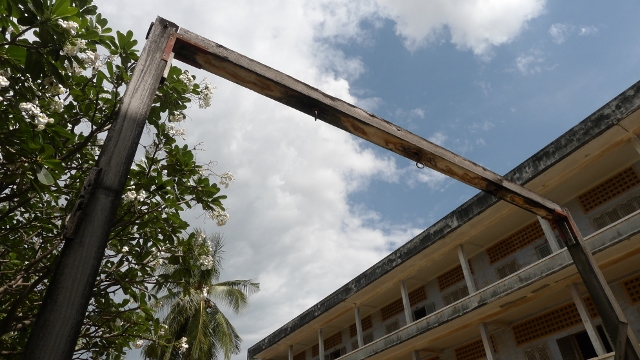 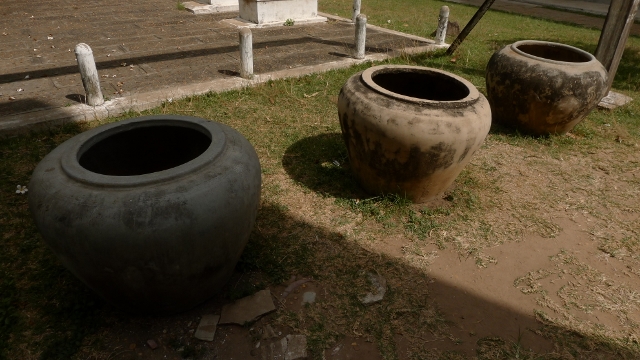 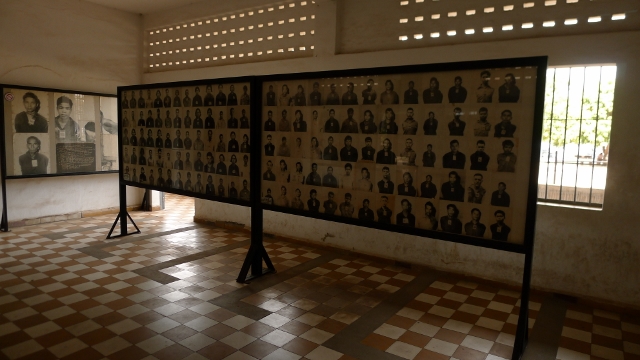 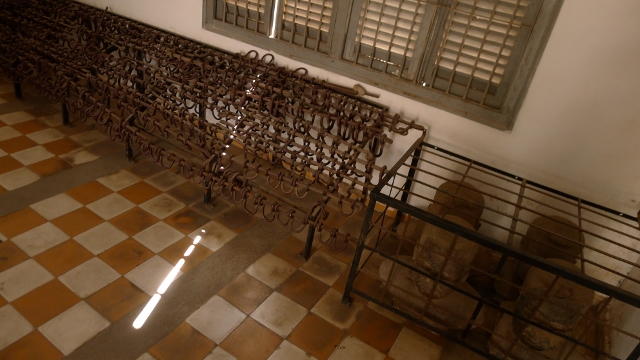 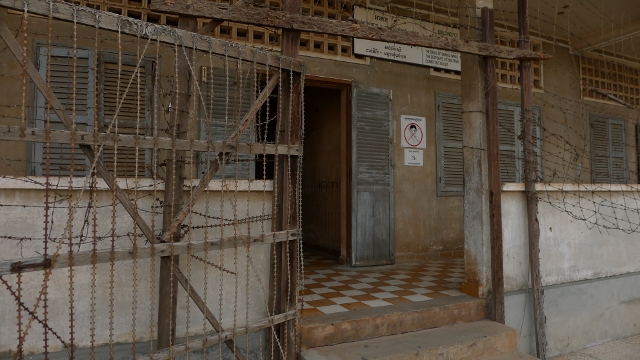 For the first year of S-21’s existence, corpses were buried near the prison. However, by the end of 1976, cadres ran out of burial spaces, the prisoner and their family were taken to the Choeung Ek extermination centre, fifteen kilometers from Phnom Penh. [Wikipedia] 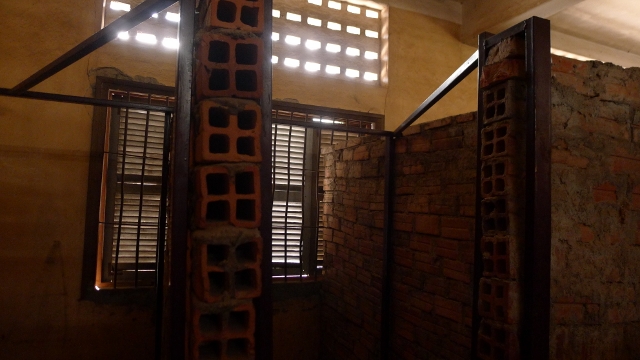 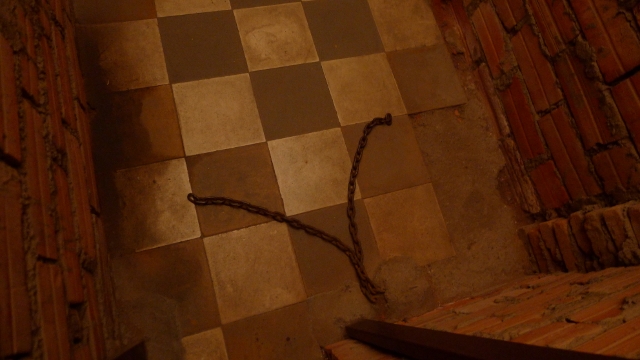 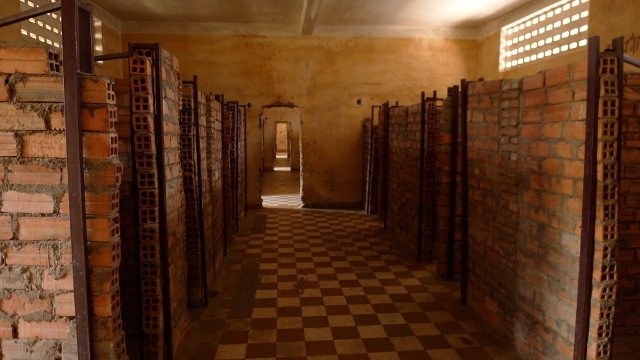 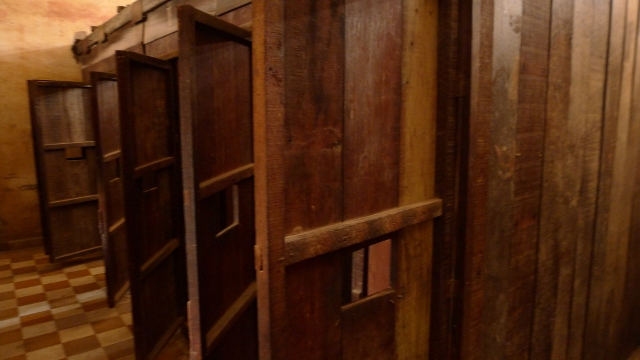 It's so hard to believe that these terrible things actually happened, and not very long ago. I can't imagine a fate much worse than being sent to S-21. It's so sad to think about all of the people who had their lives taken away from them by the Khmer Rouge. I wonder what Cambodia would be like today if this genocide had never occurred... 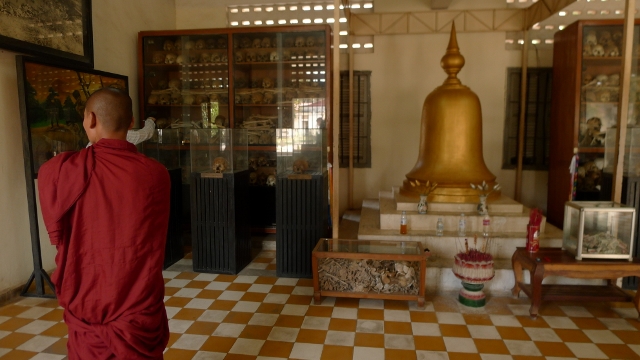 Both Choeung Ek and the Toul Sleng Museum do a fantastic job of explaining the atrocities of the Khmer Rouge and I think they serve as excellent memorials to the victims of the regime. Some people think the sights are haunted, I'm not sure ... but they both are quite creepy.

Currently, three of the most senior surviving Khmer Rouge leaders are on trial in Phnom Penh. I wanted to sit in on the trial while we were there, but the court was not in session.
by anne