Life from the Slow Boat

After the brief stop at Wat Rong Khun in Chiang Mai, we finished the journey to Chiang Khong, Thailand (across the Mekong River from Laos).

Everything was pre-arranged for us, including dinner and lodging. Our hotel room ended up being simple but quite nice. 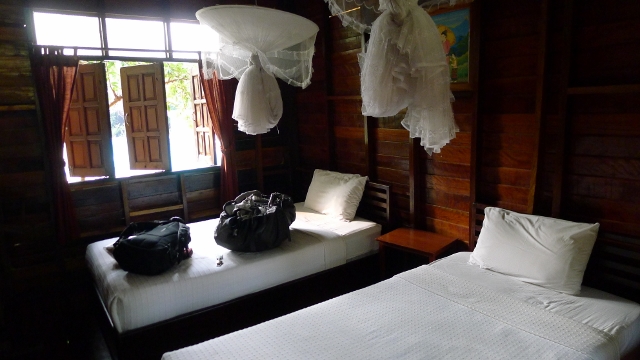 That night, Monica and I took a walk down to the river and met a few local fishermen/boat drivers who live in tents on the riverside. They let me sit on their moped and even gave us our first taste of Lao Lao. They call it whiskey, but really it's just rice wine exactly like Japanese sake.


Later, we walked around a bit and discovered one of the best inventions of all time: the recycled tire trash can. Quite functional and it even looks good. 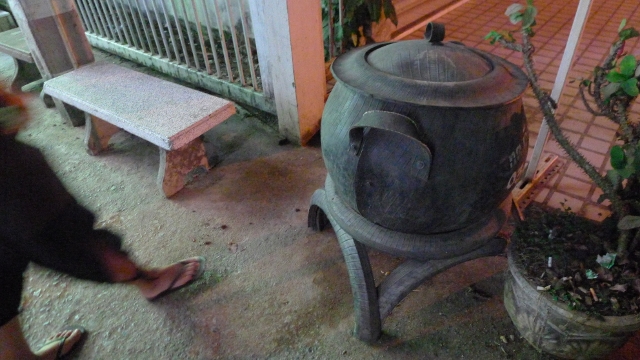 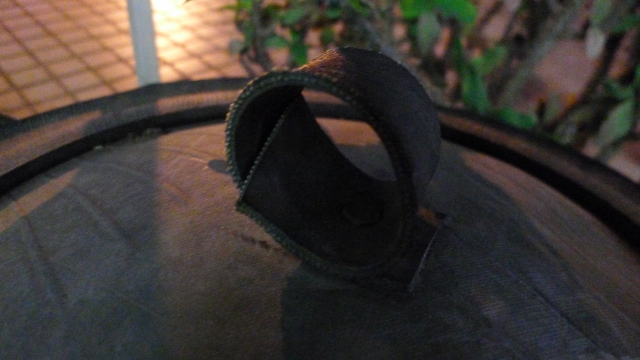 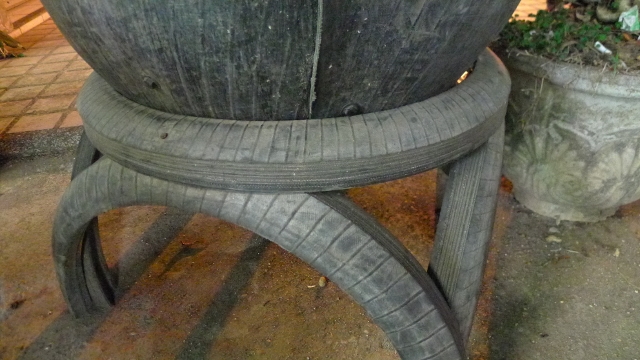 We saw a few of these traveling ATMs around Thailand. How handy! You just gotta hope they don't take off while you're still in the middle of a transaction. 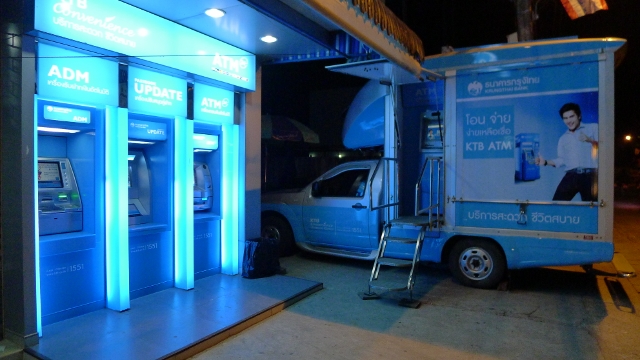 The next morning at sunrise: 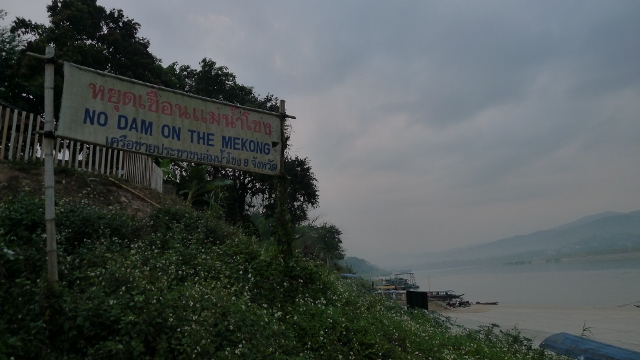 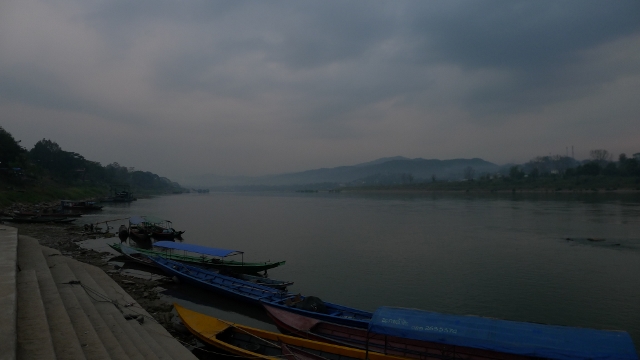 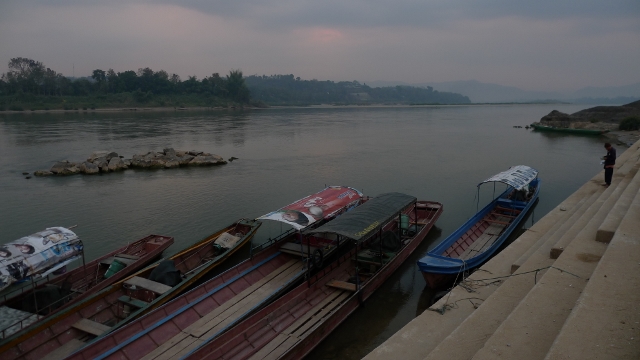 I love this shoe ad. Honey ... I shrunk the schoolboys. 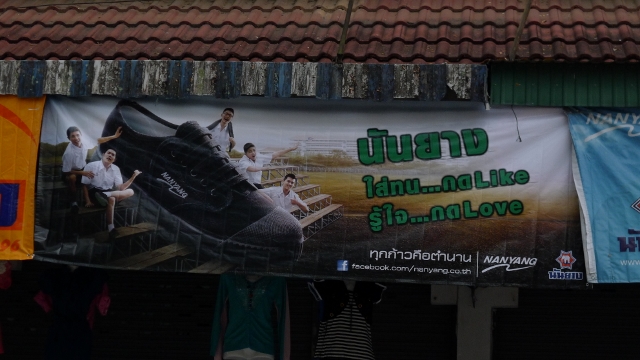 The Lao border crossing was one of the worst yet. A whole boatload (literally) of people were all trying to deal with the passport routine at the same time, and there was absolutely no organization, just a chaotic mass of people. It took a while, but eventually we got our Lao visas.

We finally boarded the boat and were able to relax and eat some snacks. 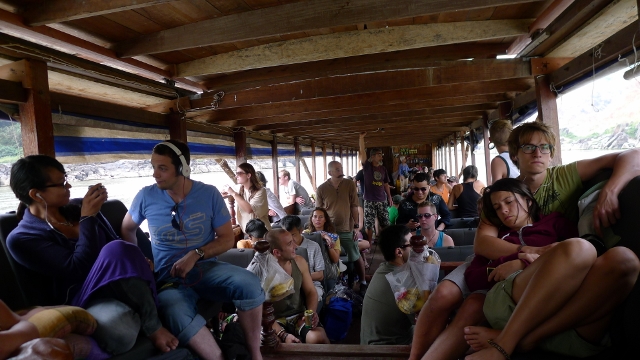 We hung out with two guys from Eugene, Oregon (Mitch and Scott) who we met on the bus from Chiang Mai. I played Skip-Bo with them to pass the time. 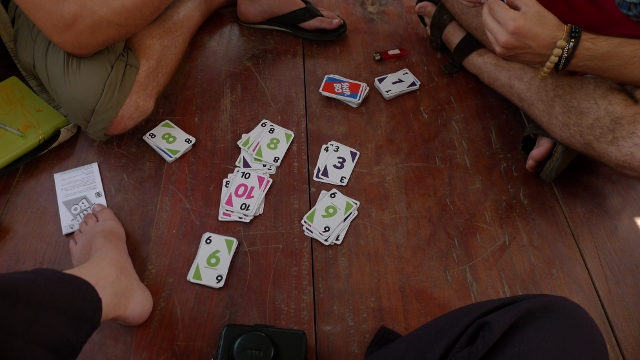 After a while, people started loosening up and finding more comfortable spots on the boat. 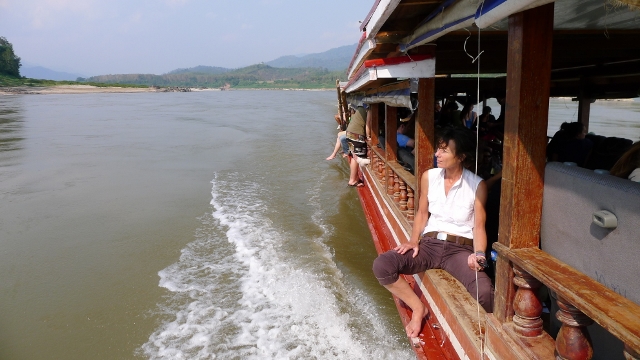 The landscape was nice, but even more special were the times we would pass people or animals on the riverbanks. I saw children swimming, animals grazing, and people fishing and washing clothes. These moments were definitely the highlights for me. 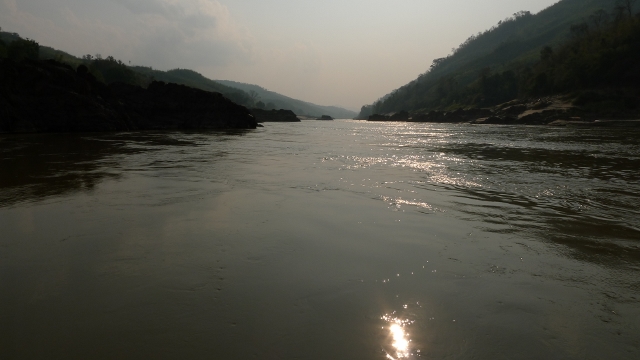 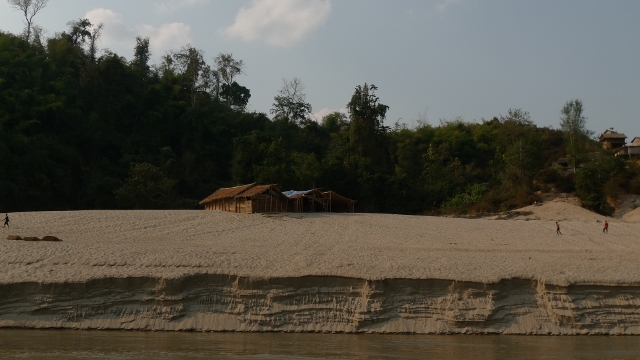 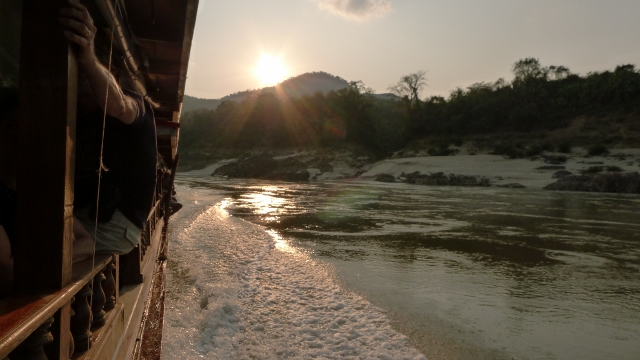 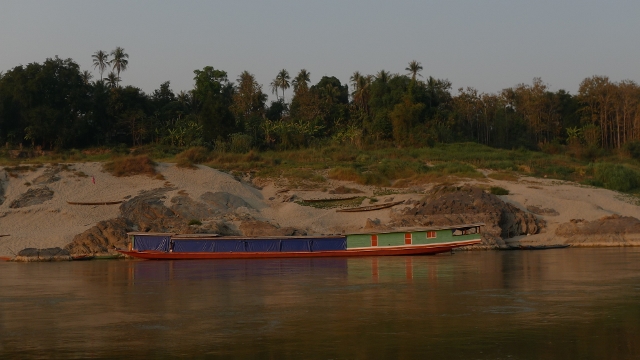 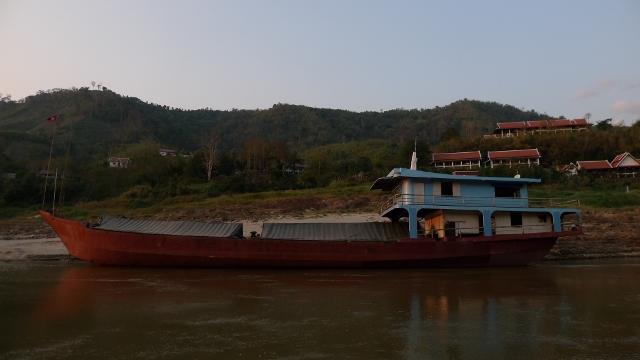 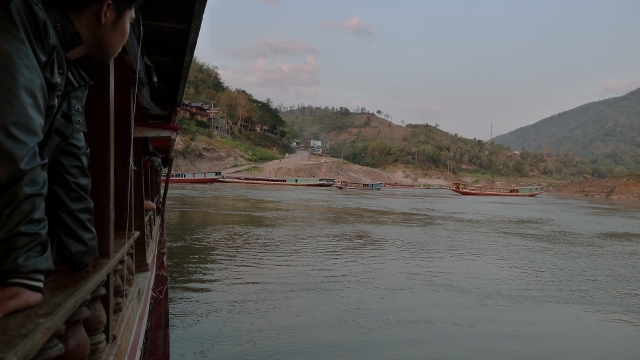 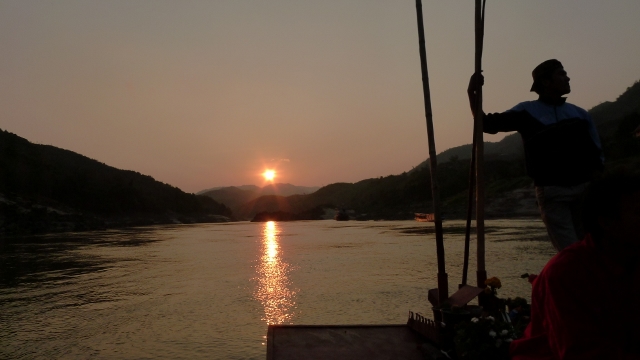 After seven or eight hours on the boat, we stopped in Pak Beng right as the sun was setting, checked into a hotel and grabbed some dinner. After dinner, we went down the street to see what was happening at the only bar in town. It ended up being pretty great. The bartender let us choose songs from her iPod, which we did for a while. After a few of our selections, we let go of the reigns and it turned into Top 40s. We still managed to have a good time.

The next day we got back on the boat around 8:30 a.m., a half hour before the boat was supposed to leave. We got on at the right time, because shortly after, no seats were left and a swarm of people started to form on the dock. They refused to get on the boat, so they just stood there trying to work it out with the totally unresponsive and unapologetic Lao crew. After a half hour or an hour of waiting, the captain started ringing the boat's bell, which is all it took for the people to board the boat.

This boat was smaller than the last, the journey was longer, and there were more passengers as well. Needless to say, I enjoyed the first day more. 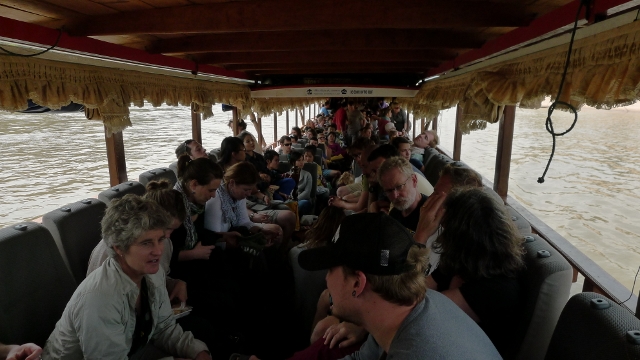 They also seemed to stop a lot to load things and even more people onto our crowded boat. 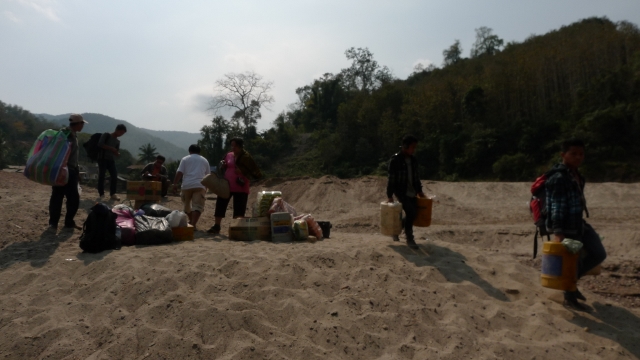 I enjoyed the scenery. 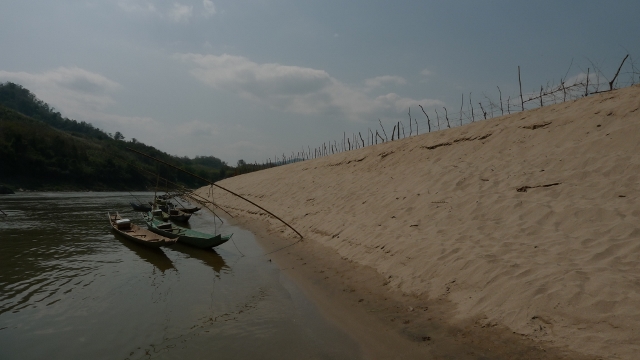 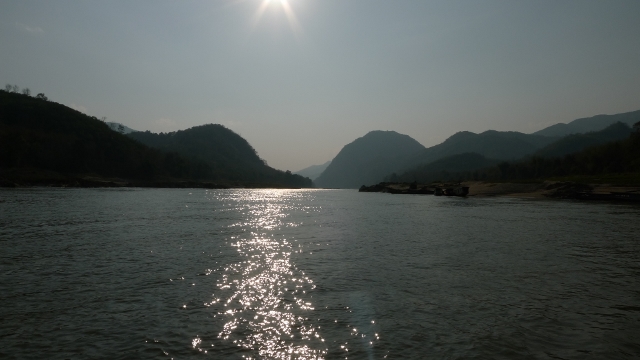 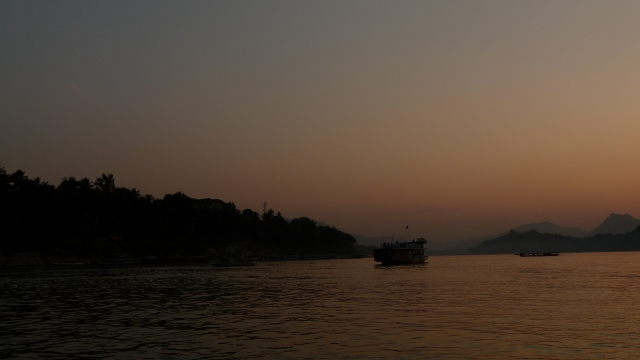 After 10 or 11 hours, we arrived at Luang Prabang and were ready to take in yet another new city.