Being short on time, we weren't sure if the trip to Halong Bay would be worth it or not. We'd have to take a four-hour bus there on day one, then board a boat that cruises around the islands, sleep on the boat and then another four-hour bus ride back to Hanoi. After a long discussion, we chose to go for it and I'm glad we did. 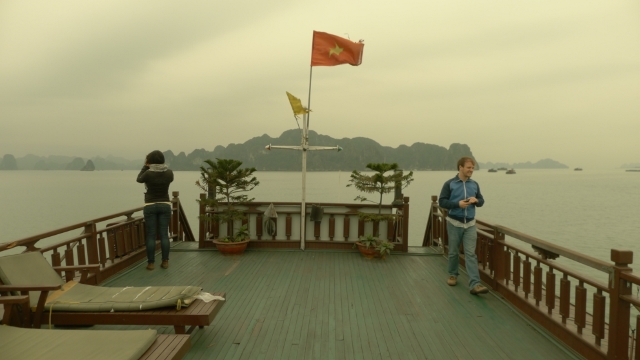 In my opinion, we had perfect weather. It was very foggy and windy (exactly like San Francisco), which created a cozy and mysterious ambiance in the bay. Though it was chilly outside (no sunbathing on the upper deck) I enjoyed the view with my coat on: layer upon layer of different shades of islands, completely surrounding us. Every few minutes, the view would change and we'd see a handful of new islands.

Our tour guide told us there were a little under 2,000 islands in the bay. The Vietnamese like to say 1,969 islands because that is the year Ho Chi Minh died. 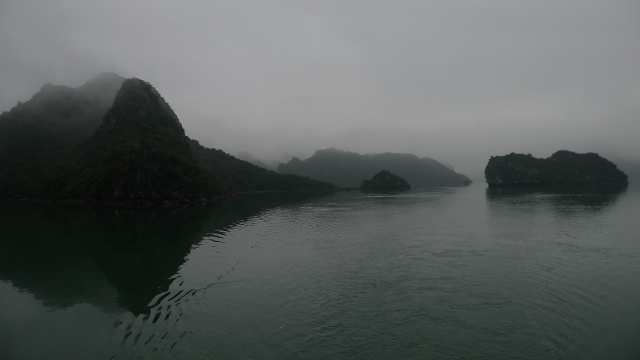 Our first stop was an unexpected visit to a cave in one of the islands. The cave had a very expansive interior, which was lit up with cheesy multi-colored disco lighting. I guess they didn't think the natural beauty was interesting enough. 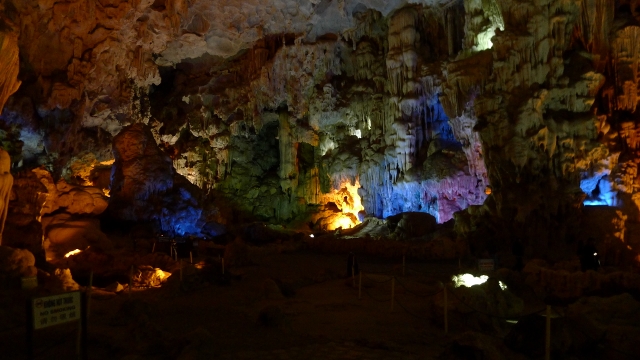 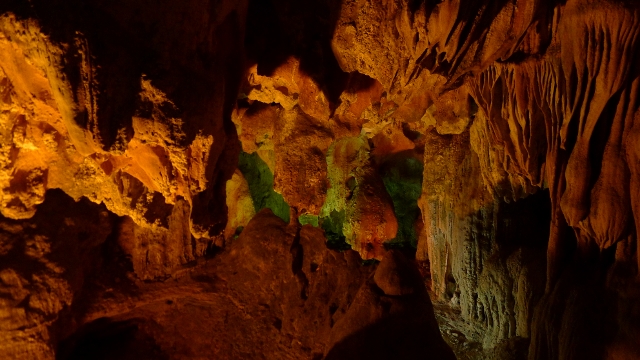 Our tour guide used a laser pen to point out formations that looked like Buddas, devils, men, women and jelly fish. Daniel, Monica and I came up with some (more interesting) ideas of our own, which we pointed out to the guide. 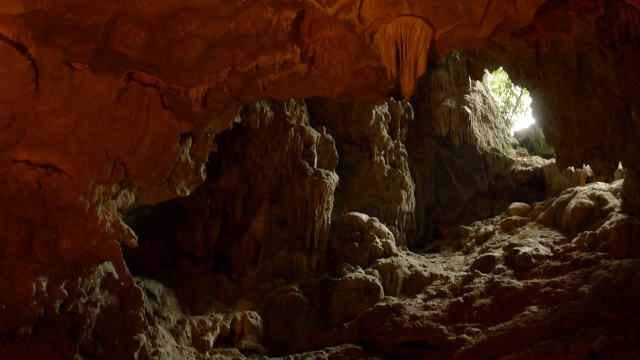 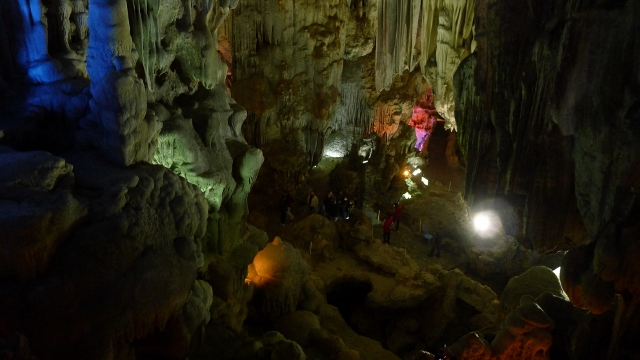 The cave wasn't that impressive, and I think the three of us agreed that the best part of the stop was our purchase: fresh sugarcane, which neither Daniel nor Monica had tried before, and I hadn't had since I was a kid. 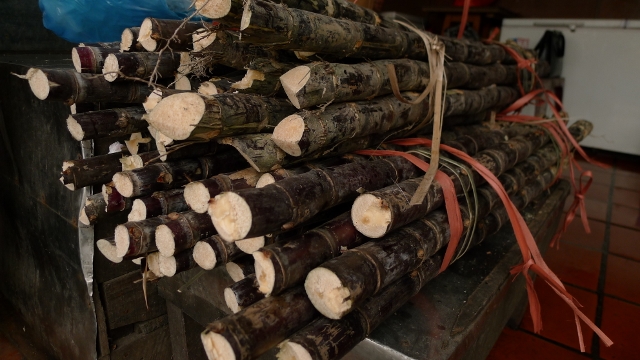 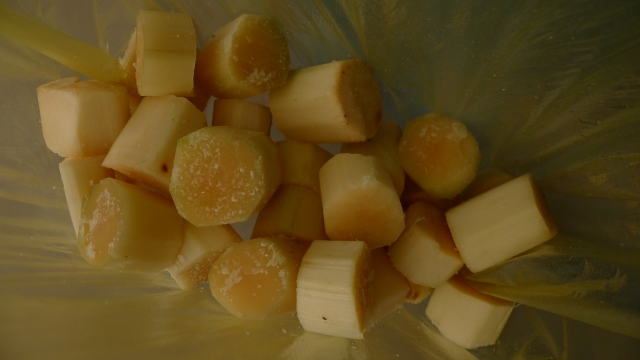 Next, our boat stopped at a floating village, with the option of paying a rowboat driver $5 each for a tour around the houses and the inside of a lagoon.

Only Daniel, myself and one other passenger opted in on the tour. 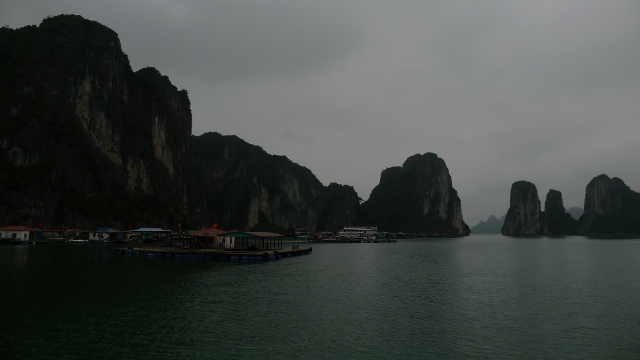 Our captain asked us if we wanted to stop at the overhanging stalagmite for a photo. Before we had a chance to respond, he was posing with it--I guess this is what he meant.

The lagoon was incredible. There was no one but us inside, and it was enclosed by enormous mountainous walls on all sides. The water was deathly still and it was deafeningly quiet. After enjoying a few moments of eerie silence, we took turns making loud noises and hearing the loud echoes reverberating off the walls.

We passed around the backside of the island... 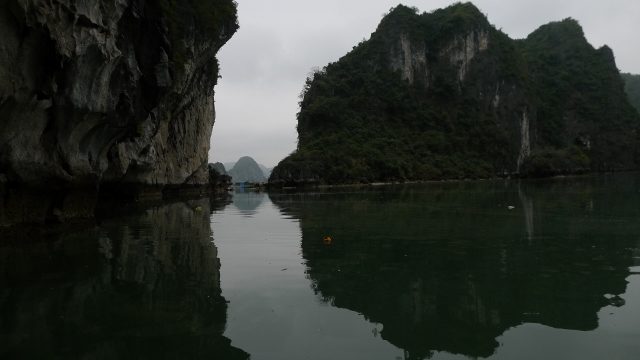 ... and back to the floating village. 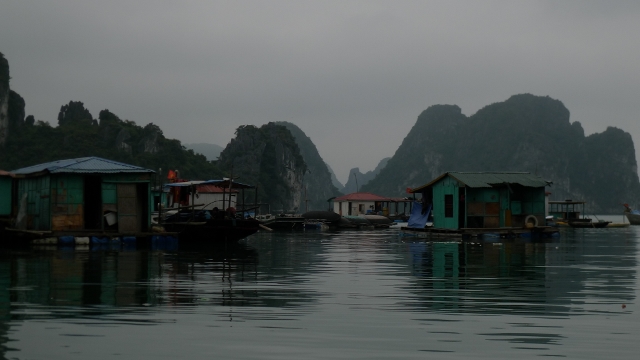 Back on our big boat, things got darker and islands got even more hidden in the distance. 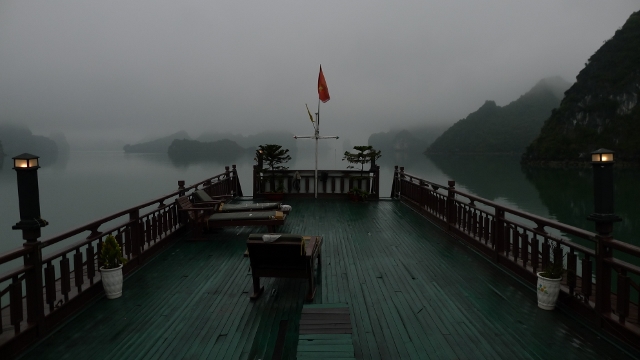 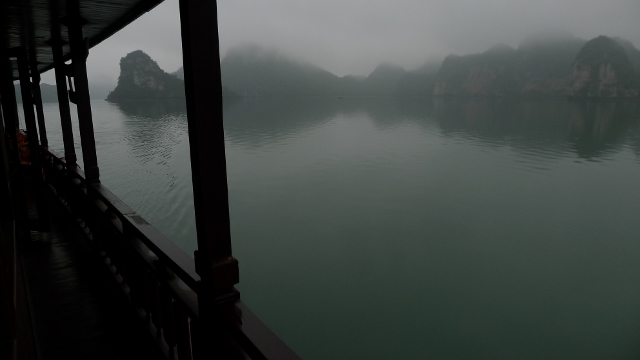 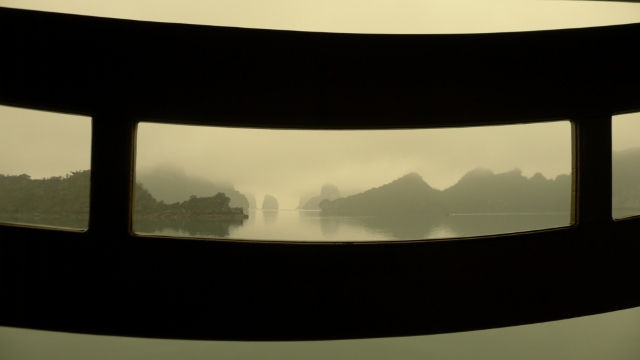 Our room was great--the only triple on the boat. The only downside was being placed above the engine, making our room smell of gas fumes. Before going to bed for the night, I said my goodbyes to Daniel and Monica, just in case we didn't wake up the next morning.

We fell asleep to the sound of bad karaoke coming from the dining room down the hall. 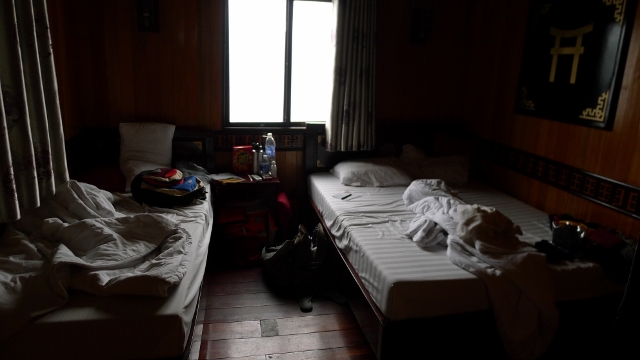 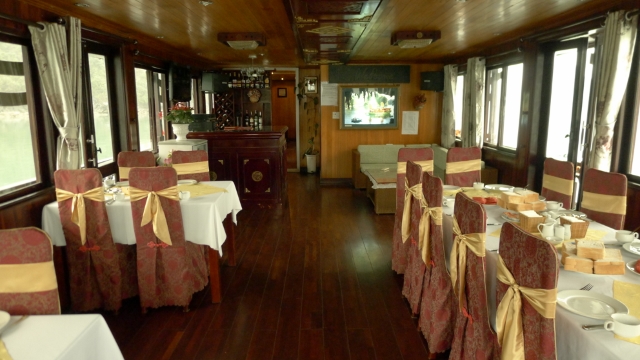 The big activity on day two was kayaking. It was quite wet and cold outside, but Daniel and I suffered through it while Monica chose to stay in the warmth of the boat. 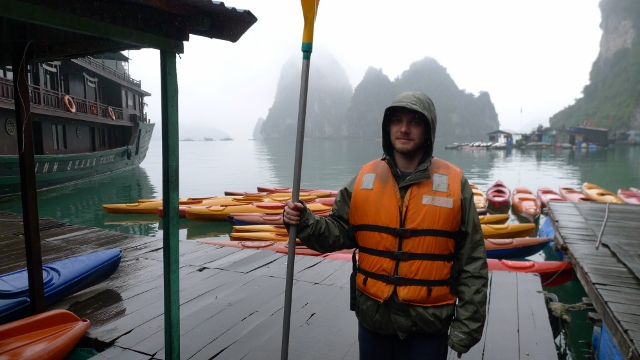 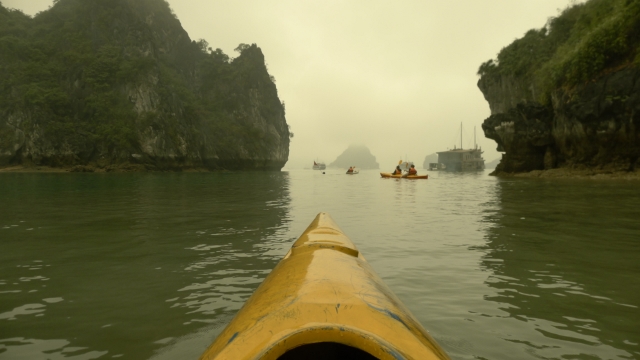 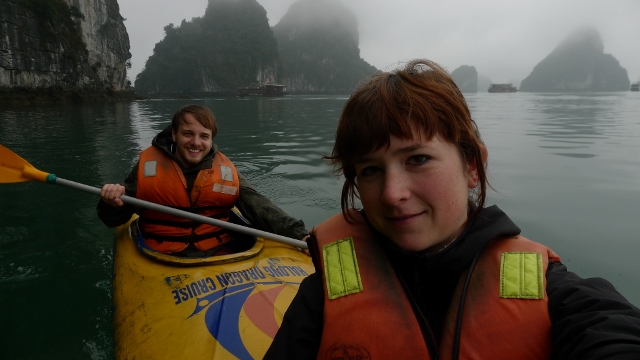 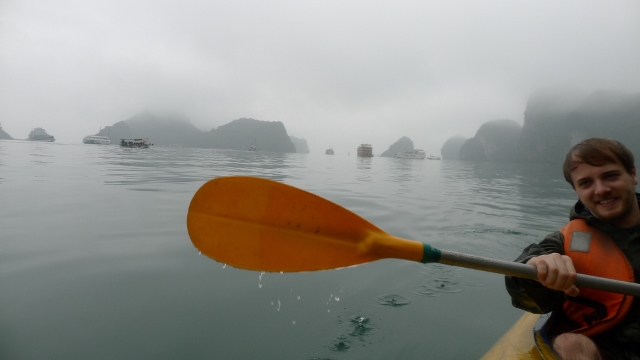 After the kayaking, we took warm showers and had our last meal on the boat. Overall, the food was mediocre. We could have spent more money for a nicer tour, with what I'm sure would have included nicer food, but we chose the mid-range tour option, and you get what you pay for. I ordered a "fresh squeezed orange juice" from the boat ($3) and I got a drink that was 80% water. Vietnam doesn't seem to have caught on very well with what tourists want/expect, unlike Thailand. I'm sure if I were on a boat in Thailand and ordered an orange juice, it would cost $1 and I would get a delicious, full glass of 100% juice (just for comparison).

Halong Bay reminds me a lot of the Milford Sound in New Zealand. Both have been nominated for the next round of wonders of the world. I'm curious to find out what happens.

I disembarked with the Titanic theme song stuck in my head ... strange that they would choose that song to play over and over on the boat.
by anne