Since Anne did such a great job at describing our week in the north of Philippines in her blog post, and to avoid being repetitive, I will resume this post to a few of my favorite photos and some captions. In one week in the north of Luzon we went to the following places: Banaue, Batad, Sagada, Baguio and Vigan, traveling either by jeepney, by bus or hiking. 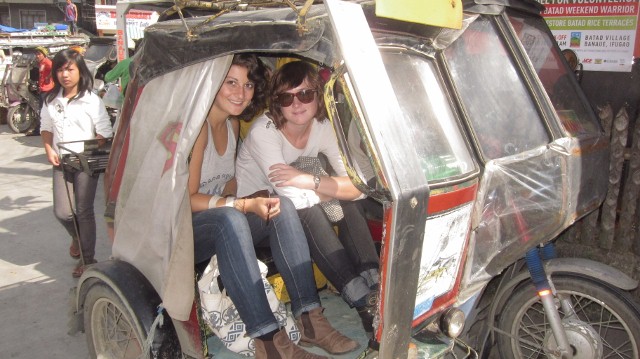 The tricycle is the equivalent of a taxi in small villages in the north of Philippines. All the locals use it and it's pretty cheap. It was however quite hard for both of us to fit inside this thing at once, because we're much taller and bigger than most of the locals here. 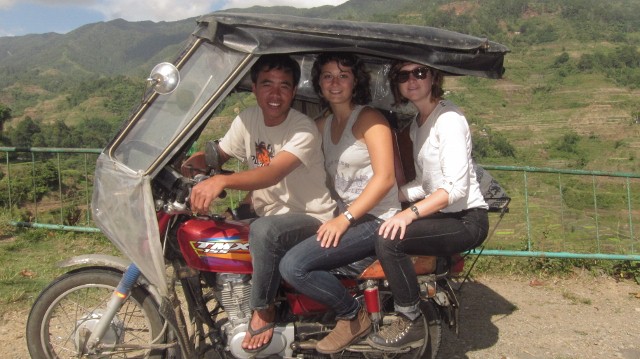 Our tricycle driver and us on the way to the vista point in Banaue. From there we hiked for about 2 hours through rice terraces and jungle forest. A breakfast with a view. This is what we saw in the morning from our breakfast nook at the guesthouse we stayed at in Banaue. 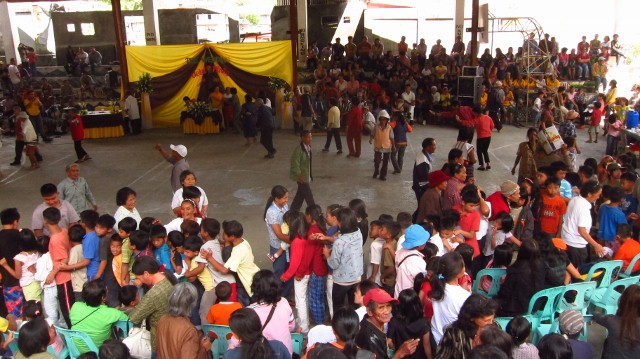 There was a wedding in town and all the villagers were invited. Apparently, a wedding like this costs about $1,500 and about 10 pigs are slaughtered to prepare enough food for all the guests. 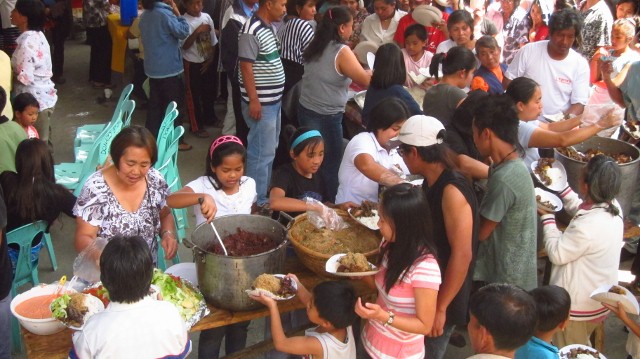 Villagers line up to get a plate of food from the wedding party. As soon as they finished eating, they all left and the place suddenly became empty. The wedding took place on the sports court of the local school and at the end of the festivities the ground was covered up in red betel nut spit and food leftovers. The smell was quite gnarly. 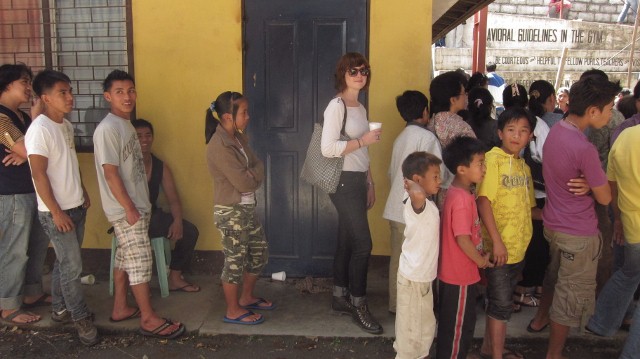 Anne and I were warmly invited to join the festivities. We were asked to go dance, were offered rice wine (which doesn't taste very good, btw.) and were asked to join the line to get food. Which we did. We didn't really like the food (there was a lot of bad smelling pork meat, fat and pieces of pork stomach and intestines which looked like they hadn't been properly washed before being cooked), but we enjoyed being part of this experience. People were being very warm and welcoming towards us. After leaving Manila, this was our first taste of the hospitality and warmheartedness of Filipino people. 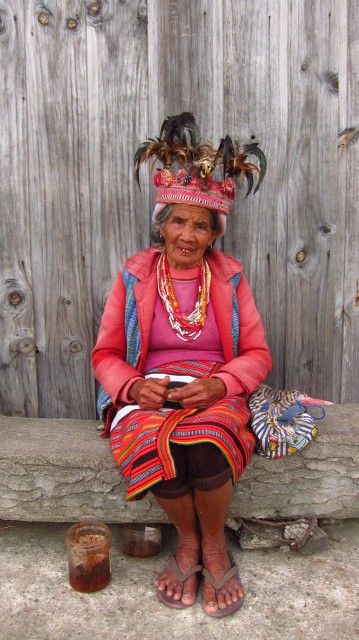 An old Ifugao woman from a village in the mountains wearing her traditional attire. She lets tourists take photos of her in exchange for some small change. Next to her is a jar in which she spits all the momma she chews up all day long. 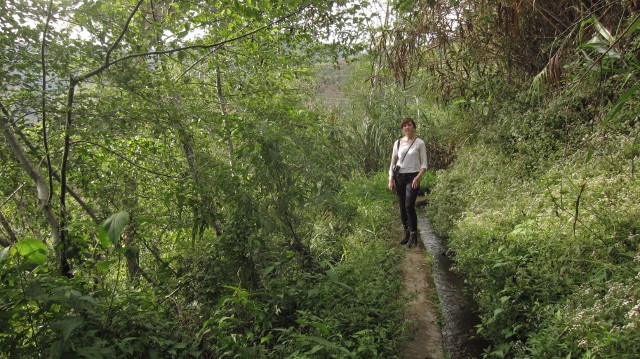 During our hike through the rice terraces around Banaue. 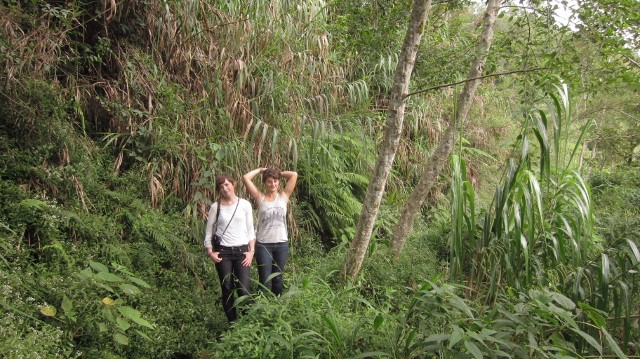 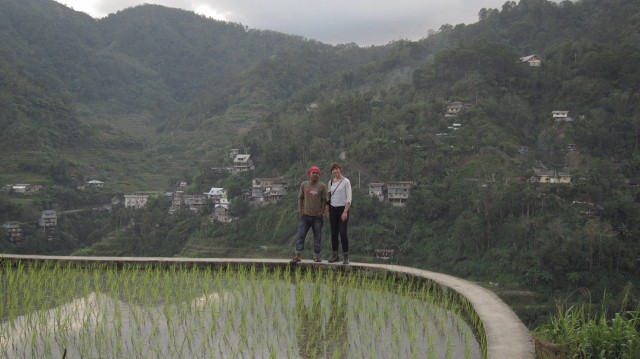 Anne and our lovely guide during our hike through rice terraces. 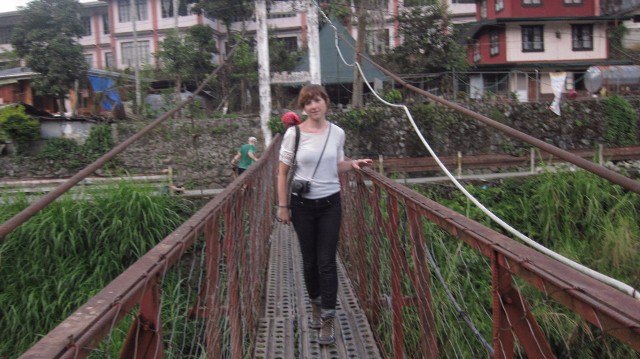 Across the suspended bridge that took us back from the hike into Banaue village. 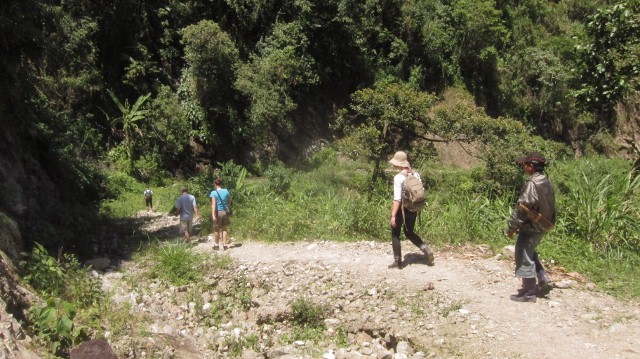 The next day in the morning we proceeded to Batad, as follows: from Banaue to Batad we took a jeepney for and hour and a half over a windy unpaved mountain road. The roads are quite scary, but the drivers are amazing, so nothing to worry there. Maybe a little prayer and a cross sign inside your mouth with your tongue, if you're the religious type. After 1.5h on this dusty unpaved road we get to the "saddle," which is exactly what it sounds like: the saddle of a mountain. Jeepneys can't go on from here, so it's all on foot, all downhill on a trail for about an hour until you reach the village of Batad. Easy on the way down, not so easy on the way back up. And remember, this trail is the only way in. No cars ever get to this village.

The guy walking behind Anne asked us many times to be our guide to the waterfall. We kept saying no to him. Anne asked me to describe here my reaction to the guy, which she found hilarious. Here it is: so imagine an 18 year old boy with a really long and thin rat-tail, wearing a machete on his back, who could barely speak any English at all, and was unable to understand anything we were saying. On top of that, he was chewing betel nut, so his mouth, teeth and lips were covered in red saliva. Every time he spoke, you could see his teeth drenched in red saliva. It make him look like a blood-thirsty head-hunter, who was going to take us to a dark corner of the forest, kill us with his machete and suck our blood. How can you look like this and expect tourists to hire you as their guide? 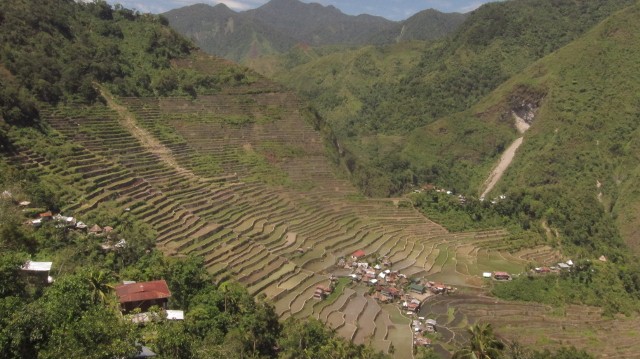 Batad is one of those perfect places that you will never forget. It's the perfect village for meditation, running away from civilization, relaxing and escaping. It really is. It is so quiet, so pristine and pure, that I can't think of any other place I've been to that has the same qualities. Even the nicest beaches in Thailand get the loud noise of motorized boats all day long. Batad sits at the bottom of an amphitheater made up of 2,000 year old terraces. Ya, the Inca terraces are awesome, but the Filipino ones are way more impressive. Plus, they've been continuously used, every year, for the last two thousand years. To make it even better, just around the corner, on the other side of the mountain in the background, there is a huge waterfall with a giant basin to swim in. Batad is hard to get to, but really worth the effort if you make it to these parts of the world. 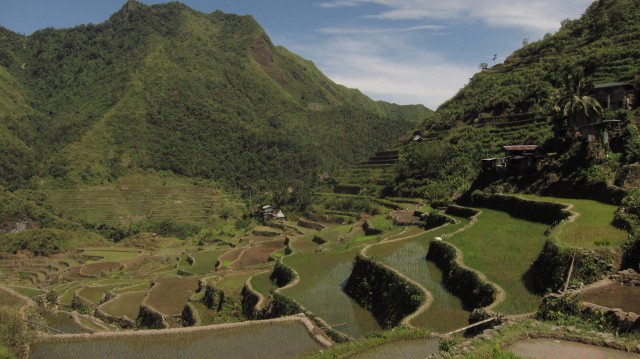 This is one of the last photos I took with my old camera. I had a little accident while hiking, I fell down and broke the camera. For the next few days I did not take any photos and later I was lucky enough to find a replacement camera in a mall in Baguio. 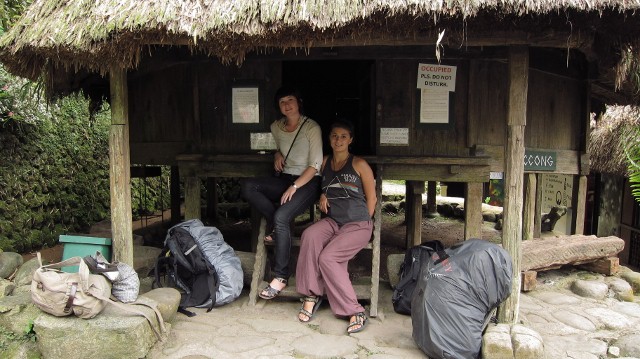 The traditional Ifugao hut we slept in during our stay in Baguio - and also the first photo with my new replacement camera. 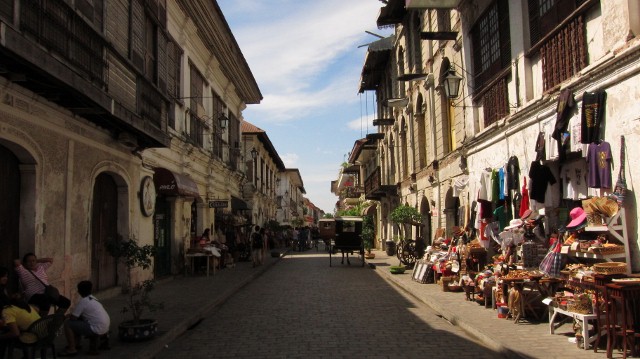 In Vigan, a picturesque village in the northern tip of Lizon, which is famous for its colonial Spanish architecture. The village was not damaged during WW2, so fortunately today you can see how many other villages in the Philippines looked like. I personally like the old Spanish architecture style much better than the new Filipino constructions. 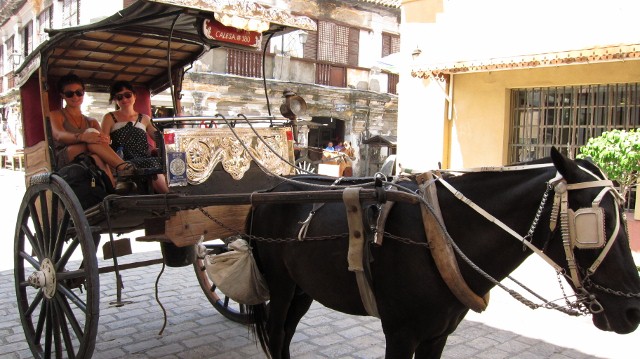 We couldn't resist the temptation to get a ride in a calesa (a horse-drawn carriage). 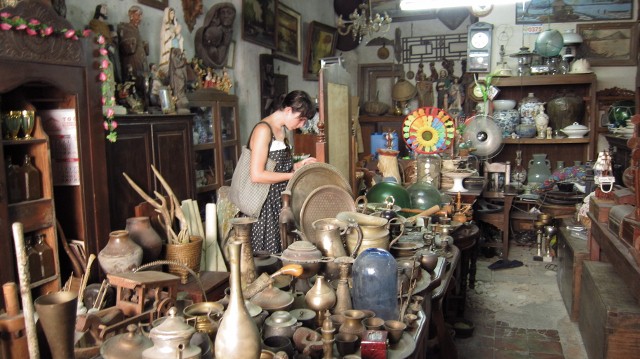 Anne found some cool old photos in an antique store. 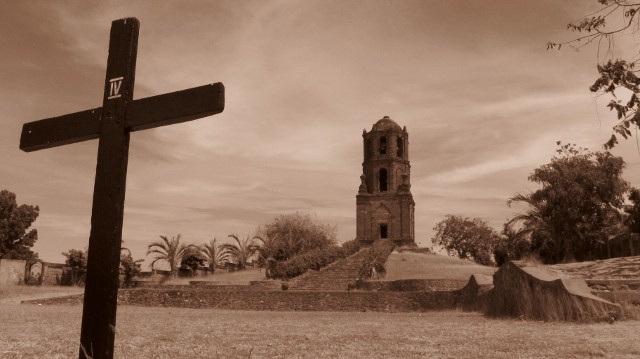 Then we went to visit an old church-bell tower. 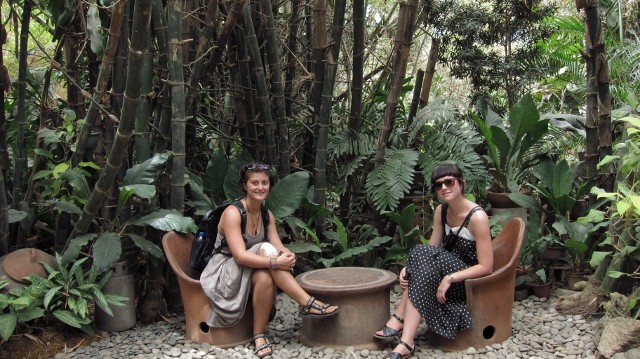 And we had lunch at the Hidden Garden. 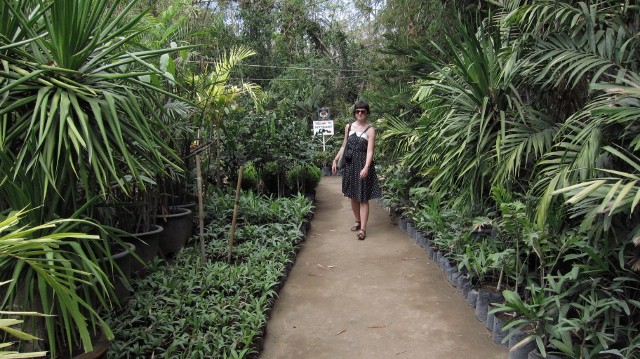 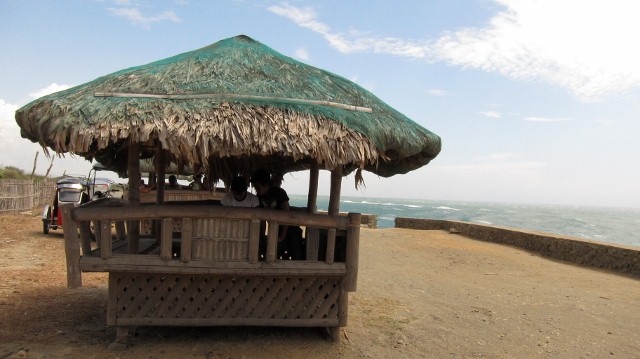 After lunch we started walking the 2km walk to the beach, but luckily a guy in a tricycle stopped and gave us a ride there. 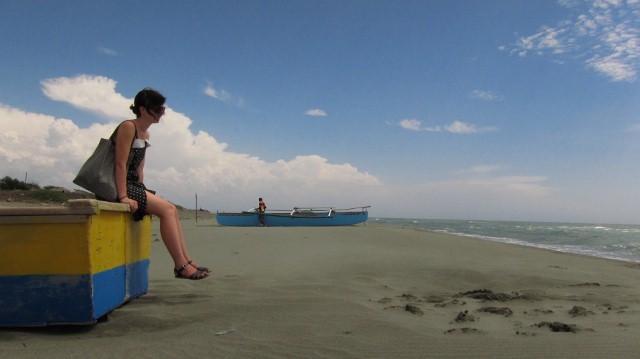 The beach in Vigan is nothing to write home about. It's very windy, the surf is high and you can't really swim. It reminded me of Ocean Beach in San Francisco. Here, this type of beach is used only by fishermen, you never see anyone sunbathing or any tourists. But in the Philippines there's no shortage of good beaches, so they can easily ignore the rougher ones. 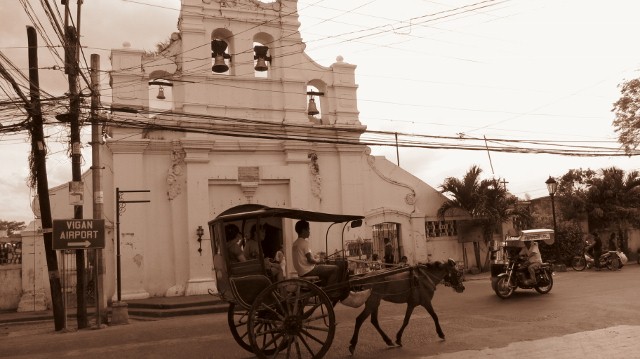 Walking around Vigan, I snapped this photo in Sepia mode and then realized how old-timey it actually looks. 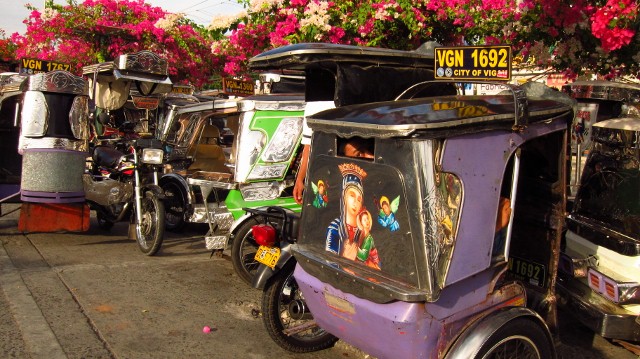 The tricycles are all individualized, with custom paint jobs, stickers and all sorts of adornments. 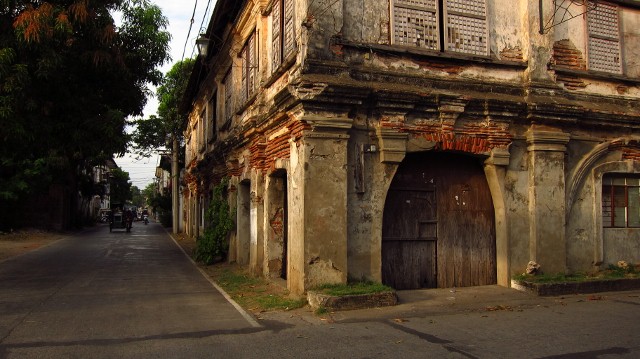 Sunset on the streets of Vigan.
by Monica S.