I enjoyed our week in Hong Kong. It was western enough to feel familiar, and different enough to retain my interest. The mix of modern and traditional was intriguing to me. The British ruled Hong Kong for 156 years, which ended in 1997 when the People's Republic of China regained sovereignty. I can see why people say it's a place where "east meets west."

We rented an apartment for the week through Airbnb, which worked out great. It was in Kowloon, the "Brooklyn" of the Hong Kong area. Being a traditional Kowloon apartment, there was no elevator, and since we stayed on the fourth floor (technically the fifth floor since they don't count the ground floor as the first floor), we got a lot of exercise every time we returned. The entrance stairwell is to the right of the Megaman awning in the photo below. 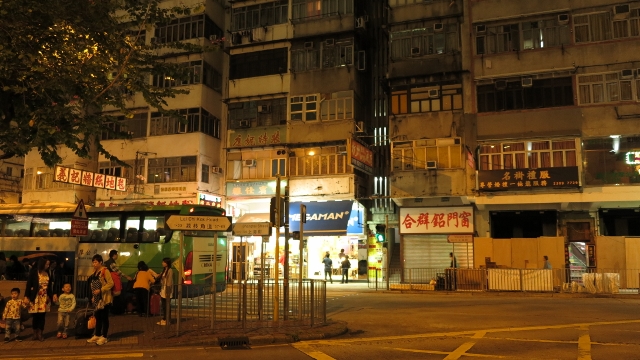 One of my favorite things to do in Hong Kong was just walk around on the streets. I have a thing for those huge old signs, most of which glow in neon light at night.

One of my favorite things about Hong Kong was the HK taxi cab! They were identical vintage Toyotas: red body, silver roof. I want one for myself--quite roomy on the inside (seats four comfortably in the backseat), cool colors, nice style, manual transmission. They take you one kilometer for a flat rate of $20 HKD ($2.50 USD); after that, the meter starts additional tallying. 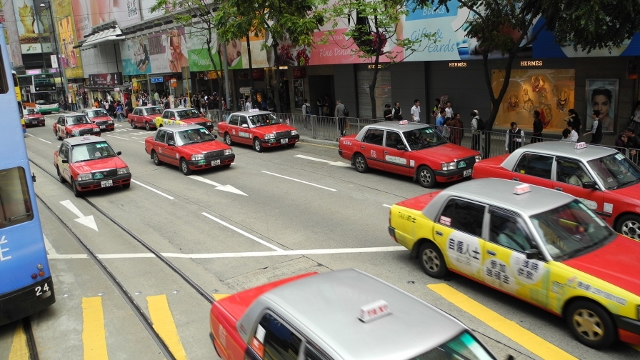 My last statement can extend to encompass most forms of transportation in Hong Kong: double-decker bus, double-decker tram, ferry, public light bus, subway, peak tram and escalators. The public transport traveling rate in HK exceeds 90 percent every day--the highest in the world. Much of this is because the system is inexpensive and easy to use, but also it's expensive to buy or own a car in HK, so only the very wealthiest people can afford it.

Just like in Cambodia and some of the other Southeast Asian countries we visited, bamboo is used to build scaffolding in HK. I was surprised that a first-world country would use bamboo in this way, just like its third-world neighbors. I guess bamboo is strong, reliable, and is a renewable local natural resource, so why not use it?

Here's a nice shot of Monica... 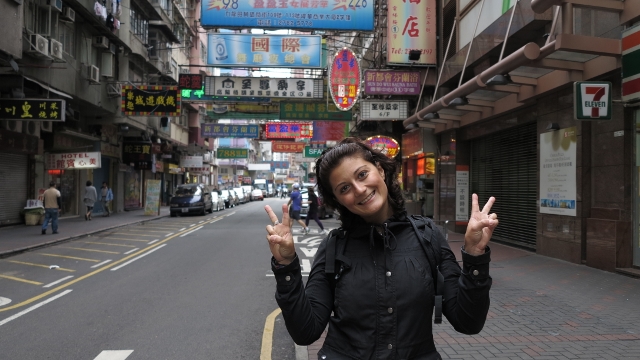 ...and a cool downtown shot. 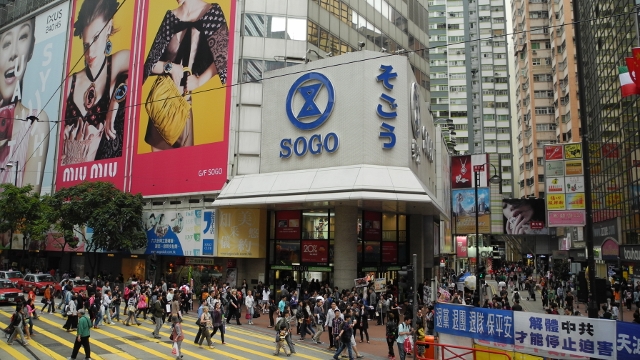 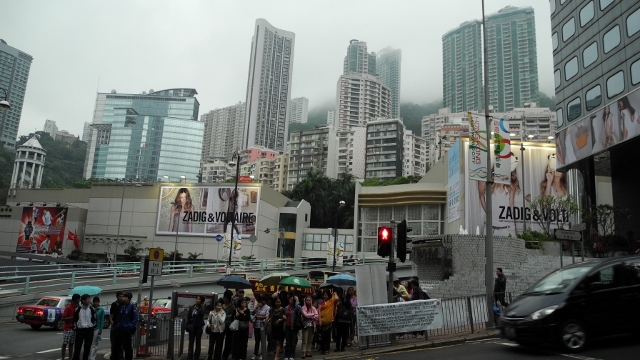 We encountered what I think are cockatoos in downtown HK. They inhabited this beautiful red-blossomed tree. 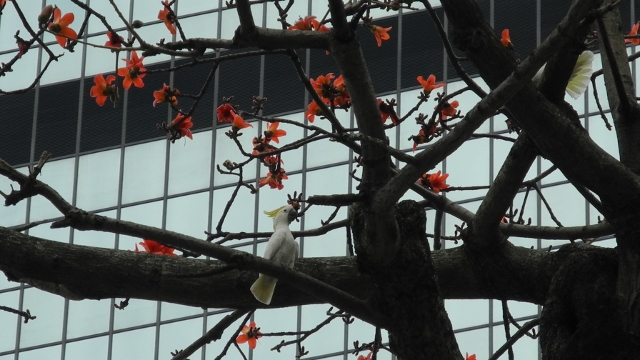 One day we rode the tram across the entire city as far as we could go and ended up at a market. 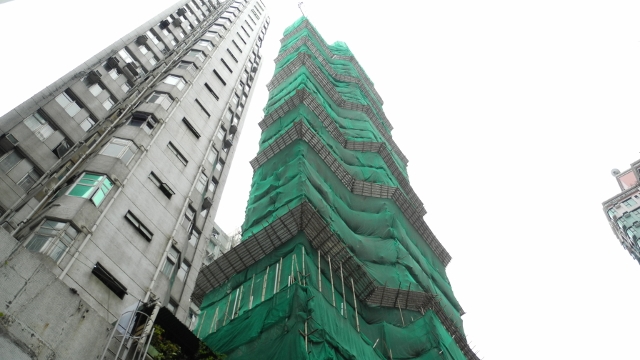 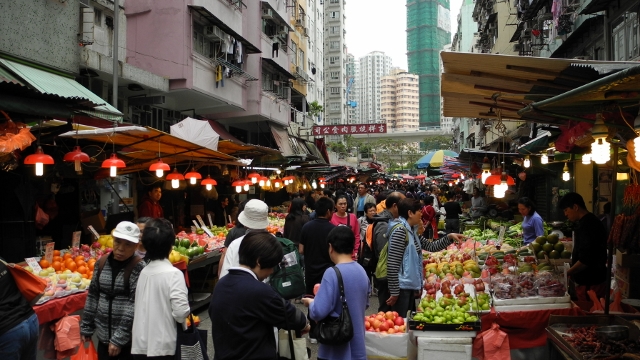 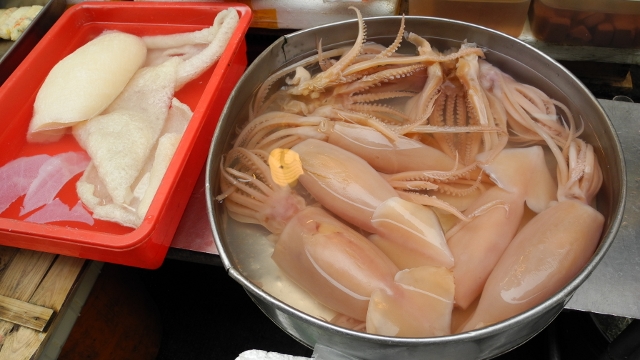 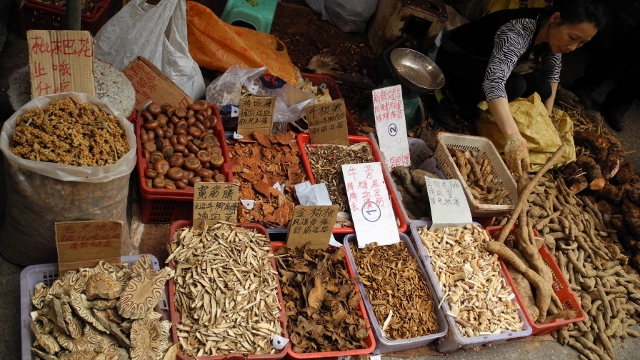 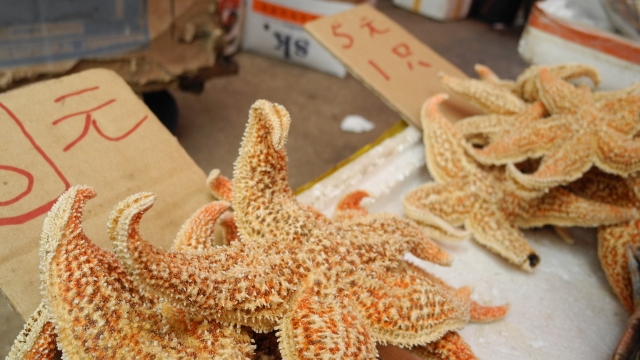 We rode the Peak Tram one day. Unfortunately, there was so much fog at the top that we couldn't see the city below. We heard it was a nice view... 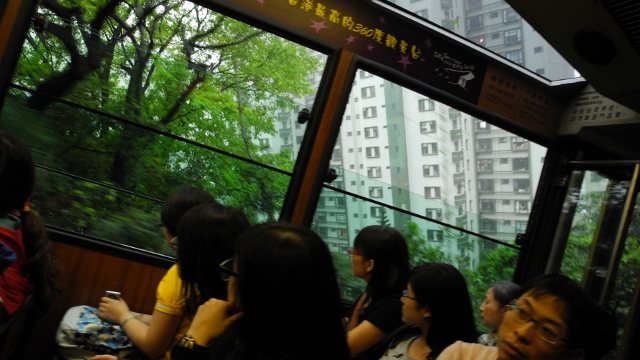 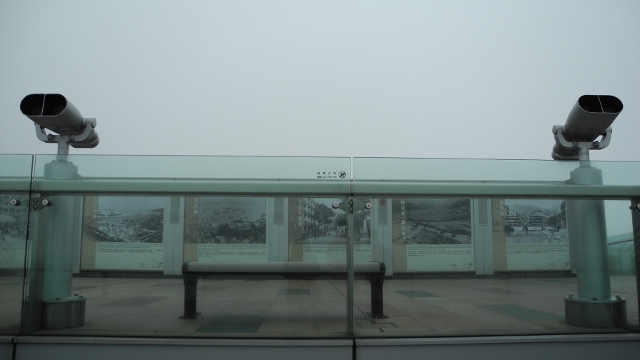 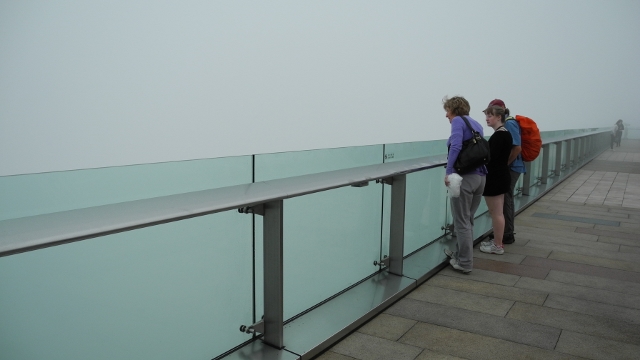 To get to the viewpoint at the very top, you have to go through a mall. 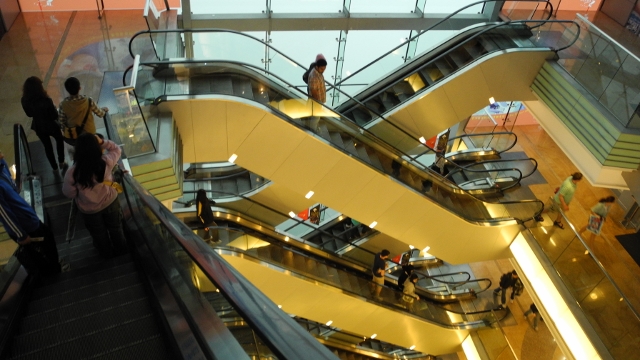 My favorite part of the ride was going back down the hill--the tram car doesn't turn around, so you go down with your back facing the bottom of the hill, leaning back in your seat quite a bit.

We took the Hong Kong-Kowloon Ferry... 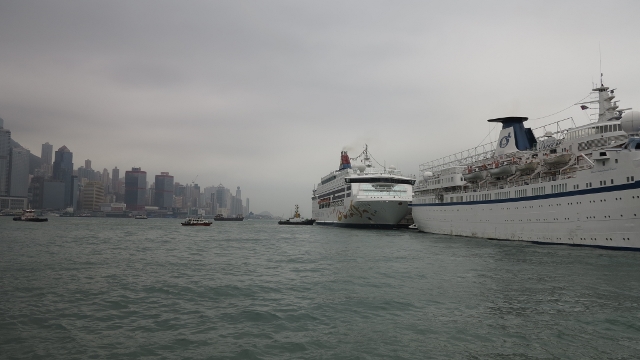 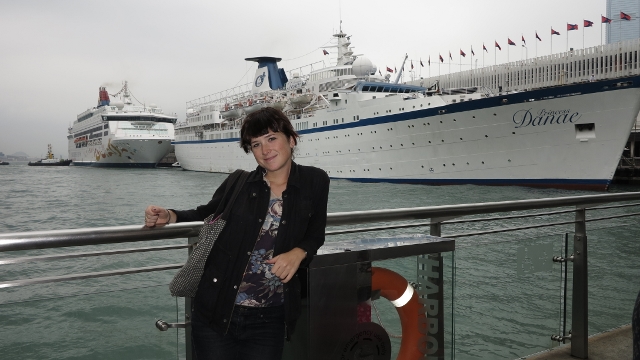 Another day, we took a different ferry to nearby Cheung Chau Island. 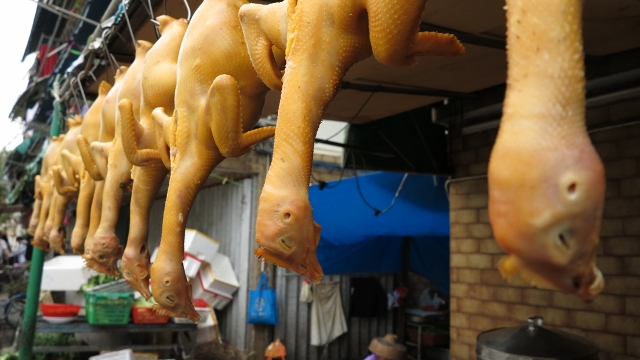 There is a large migrant worker population in HK, and we heard that the Filipinos hang out in one particular area of the city on Sundays, while the Indonesians occupy a different area. We checked out the Filipino zone and it was pretty surreal.

Most of the migrant workers are housekeepers/nannies and live in the homes of their employers. Having no common space of their own, they hang out in public spaces on their one day off, Sunday, usually under overpasses and walkways, on the sidewalk, and in any other sort of paved area. Most of them sit on cardboard boxes, play cards or other games, picnic and socialize with friends and family.

There happened to be a meeting of migrant workers going on. 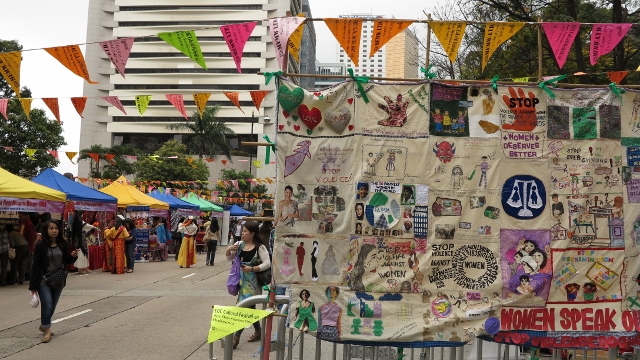 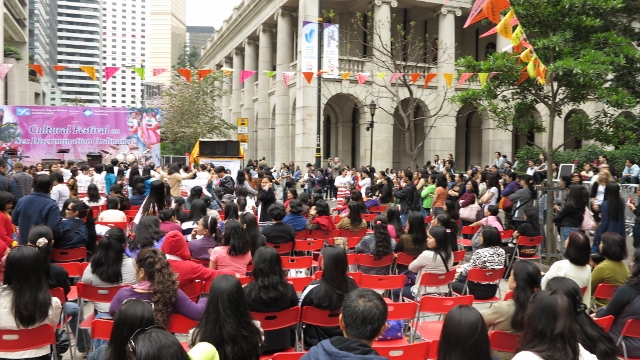 We snapped a couple photos of these lovely ladies who were participating in a beauty contest... 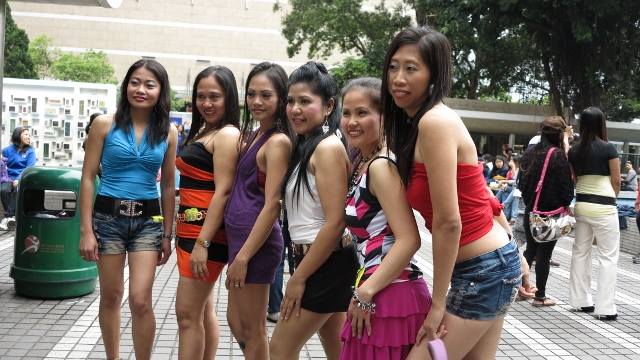 ...and made friends with a few of the younger girls. 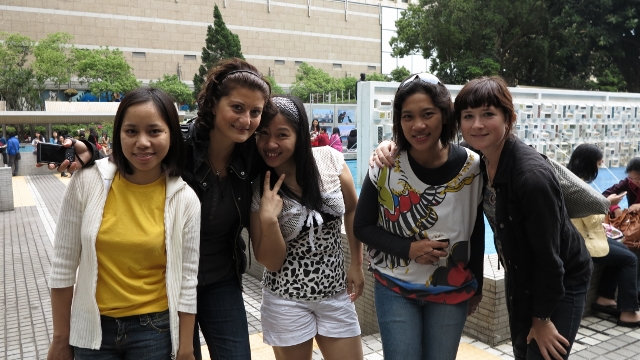 I'm going to end with some random shots of the city. 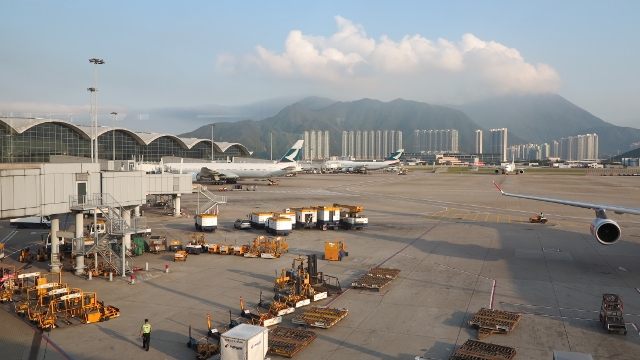 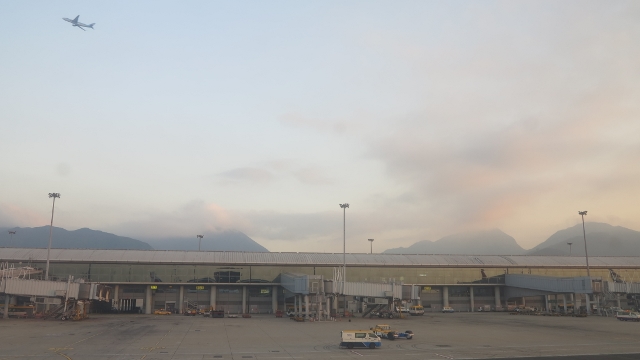 Monica and I also met up with some friends of ours who live in HK. It was great to see my friend Laura and finally meet her boyfriend Lawrence. It's always interesting to learn more about a city from someone who lives there.

I drank bubble tea, but not as much as I expected or hoped for. It was a little hard to find. We ate dim sum and tasty Chinese food. I also stocked up on sweets at an amazing by-the-kilo Japanese candy store, which came in handy for all the films we saw--I think it was seven total, all part of the HK International Film Festival. My favorite was "Your Sister's Sister."

Now we're in India and it's plain madness. When was the last time you can say you were cut off by a cow while walking through town?
by anne