I really don't even know where to begin. India is so different from all the other countries we've been to. It's been the most challenging country so far, as well. Pretty much anything involving money becomes a struggle at some point. My friend Jenny met up with me and Monica for a month while we travel through India and Nepal--it's been great to have another member of our group. We've become a team, sticking together against the face of our odds, against the people who try to cheat and scam and stare at us.

I don't want to paint an entirely negative picture, because there is a lot to love about this country, but being a white, female traveler here is difficult, at least in the northern part of the country, where we've been for the last two weeks.

Some things I love: Indian music, all types: classical, folk, Bollywood, pop, etc. I also love Hindi, the language--the cute and gentle "d" and "b" sounds specifically. I love how most Indians seem to be connected to all the animals around them. I'm actually going to devote an entire blog post to all of the animals we've seen in India, because there are so many!

The food is another thing I love. I was blown away by our first Indian meal. We ate at a place that our driver recommended--Andhra Pradesh Bhawan Canteen. If you ever make it to Delhi, eat here. You won't be disappointed. An all-you-can-eat meal costs less than $2 USD. 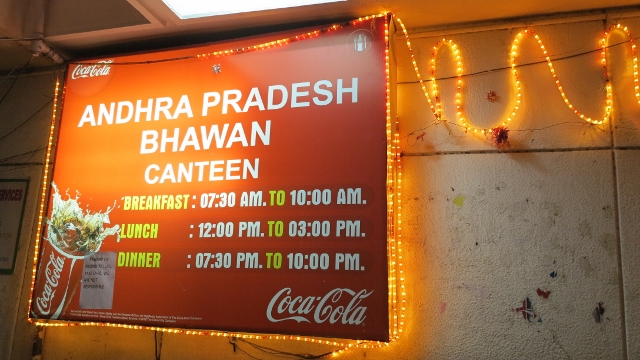 Soon after arrival, we started to notice the eyes staring at us from all directions. Indian men must not think it's rude to stare, because they will just FEAST their eyes on you with no shame or covertness.

Before getting on a night train at the station near Agra, the three of us were literally surrounded by men facing and staring at us, mostly with their arms crossed in front of their chests, some of whom where taking cell phone photos of us.

More and more men started turning up and joining the circle around us until we were forced to completely cover ourselves (faces too!) with our scarves. It's a horrible feeling.

In addition to the Animal Planet "Feeding In the Wild" episode that was occurring, there were about one hundred rats per square foot on the train tracks, and one billion birds above the train tracks making awful, deafening bat-like squeaking sounds. Oh, also there were mosquitoes swarming around our bodies. At this point, I realized out loud, "this is hell."

Being foreigners, we were definitely a sight to behold for many Indians we encountered, even in a big city like Delhi.

Many people we met commented on our appearances and resemblances.

I was called:
1. Shakira (Jenny was also called Shakira at one point, so it became less cool.)
2. An angel
3. My favorite: a fairy!

Jenny was also likened to a famous Indian actress, but I forget her name.

Mostly, all the men thought Monica was a beautiful Indian woman, and they all wanted to marry her.

In Delhi, we booked a two-week road trip through northern India because it seemed like the best and easiest option. Our route was Delhi--Mandawa--Bikaner--Kuhri--Jaisalmer--Jodhpur--Pushkar--Jaipur--Fatehpur Sikri--Agra--Varanasi. It turned out really great; I'm so glad we had the luxuries of a car and driver, and hotel rooms booked for us in advance. It made the already somewhat stressful experience of being in India so much better. (Internet is very difficult to find here so booking hotels in advance and doing research would have been very challenging while we were on the road.)

The roads in northern India are okay, but it's the obstacles that make driving strenuous: countless unmarked speed bumps, herds of cattle, sheep, goats, packs of dogs, camels, horses, "wide load" vehicles around blind curves, slow tractors, crazy drivers, and the intensity of the sun in your eyes. Much love to Jai for being an excellent driver. We forgive you for making us feel guilty in the end and asking for more money, because it seems like that is just the norm.

One thing we had to reckon with was the litter everywhere. I tried to squint and pretend it was some sort of beautiful shimmery ground coating sometimes, but that only worked in the car when the trash was far away. 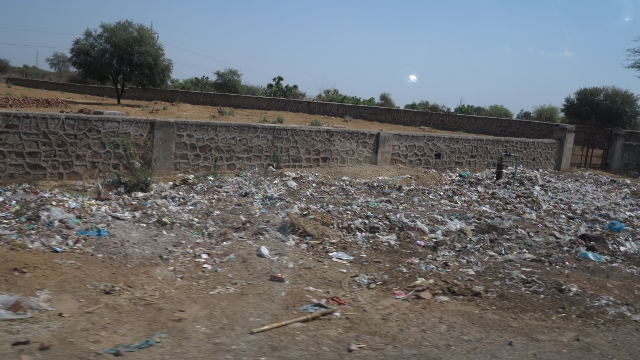 India is hot! I bet it was over 100 degrees most of the days we've been here.

Plus, it's very dry up here in the desert region so you need to drink ten times the amount of water you expect, and then some. The other day I drank three liters of water before noon and didn't pee once.

One more thing I love is the many forms of transportation in India. In Delhi, my favorite were the white vintage Ambassador taxis. Sadly, I didn't get to ride in one.

Of course there are rickshaws, tuk-tuks and motorbikes, but what you might not realize is people use all sorts of animals regularly to carry things and people around--long and short distances--including horses, cows, camels and donkeys!

We didn't know what to expect with the hotels included in our package tour, but we were quite pleased with most of them. The shower water was generally cold, and the WiFi generally didn't work, but we were told that's why they call it "incredible India." When something actually does work, it's incredible! 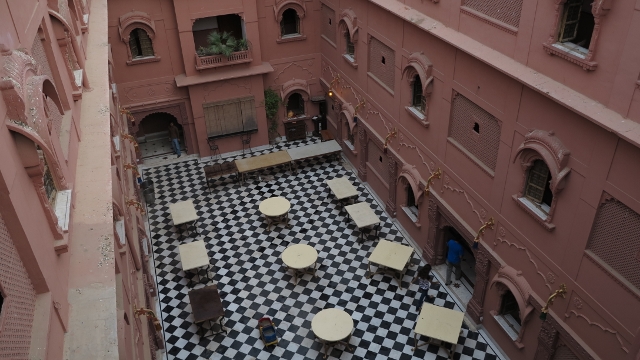 Another fun fact: India takes things very seriously when it comes to entering the country or checking into a hotel. Below, notice the larger-than-life registration book, which is quite common at Indian hotels. Filling that thing out was more painful than the medical information forms new doctors require.

My favorite part of our trip was our camel safari and camping in the desert near Kuhri Village. Below is a photo of some local kids we met in the middle of our safari ... More on this in a later post. 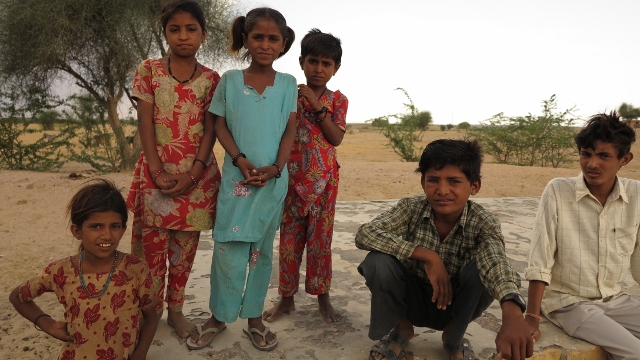 Cows are considered a sacred animal for people of the Hindu faith, which is the dominant religion in India. No one would ever get angry with a cow for crossing the road at an inconvenient time, eating vegetables from their stand, shitting on their foot, etc.

I've read that some people believe the cow acts as a surrogate mother by providing milk to human beings for its whole life, therefore they think the cow is truly the mother of the world.

Indians never seem to get enough of their spices. Below is a photo of a snack I enjoyed--pretty spicy! It reminded me of being 10 years old again, and eating those "Hot Fries" I used to get from the vending machine at the YMCA. I wonder if those are a southern snack. 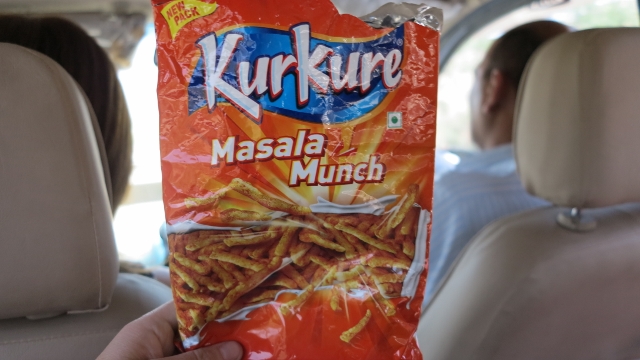 That brings me to Indian toilets. Don't expect to find any toilet paper, nor even a water sprayer hose like you find in most parts of Southeast Asia. Here, you find a spigot and a small bucket to clean yourself. (We always carry our own roll of toilet paper with us.)


Squat toilets are most common, but this was a new design (below): if you want, you can lift the toilet seat and stand on the ledge of the toilet rim to do your business. I imagine some people have had perilous accidents involving this toilet design. 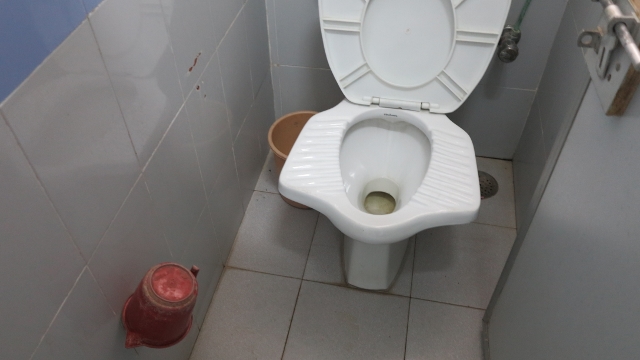 India is not quite the peaceful place of yoga and meditation I had imagined, but we did get a chance to do a quick photo shoot at a palace... 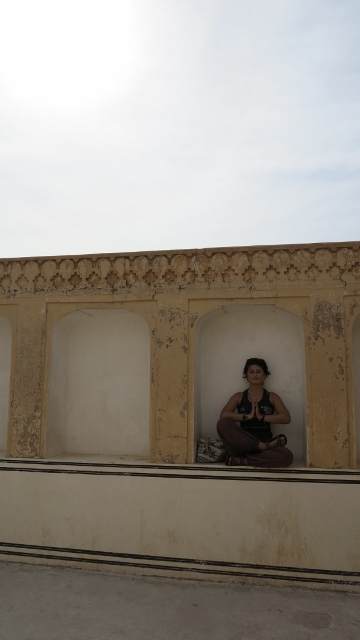 Money is responsible for a lot of the hassles encountered when traveling through India. I could write a book on this, but it would be boring so I won't go much into it. Thinking about what we've been through actually starts to make my blood boil a little at this point in our trip, so I'm going to spare myself from thinking about it too deeply right now. Jenny does a wonderful job of capturing some of our experiences in her blog post.

"Being sold to" is a huge part of being a tourist, and we caved and let them have a go with us at a bunch of different shops: fabric, clothing, wood-block printing, rug weaving, and marble, to name a few. Experienced salesmen work in these shops. They offer you a cup of chai masala tea or Coke. They give you a demonstration of the process, and then they bring out the goods. Usually, if your driver took you to the shop, he will get a cut of whatever you end up spending at the store. 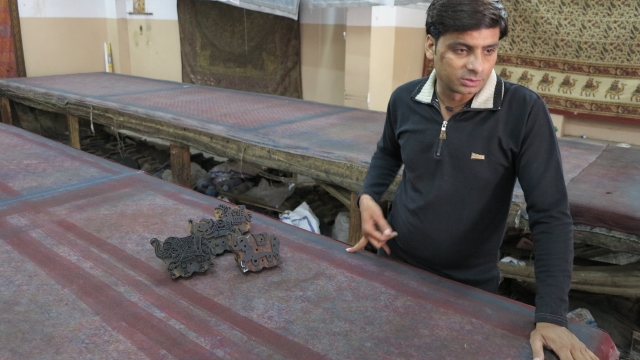 The caste system is still in effect, and it was quite apparent when we visited the Taj Mahal. To get in, we had to wait in a line (the foreigner, female line to be exact). Ahead of us was the Indian female line. Ahead of that group was the foreign male line, followed by the Indian lower-class male and then finally the Indian upper-class male. We were lowest on the totem pole.

We spent our last four nights in India in the "holy" city of Varanasi, which had its ups and downs. The air was full of dust, exhaust fumes and cremation smoke. The ground was full of excrement, trash and throngs of flies. We struggled a lot negotiating rates with drivers and our hotel staff, and all three of us got sick. Despite these tribulations, I managed to have some great experiences, like our two rowboat rides on the Ganges, my sitar lesson, and meeting a friendly Indian boy who helped me buy a sitar and treated me to a Coke (slightly redeeming Indian men, in my eyes).

But I think we're all happy to say we're in Nepal now! We're in a little town called Lumbini just across the border, the town where Buddha was born.
by anne