Food in the Philippines

I came to the Philippines with high expectations about the food. It was all because of Anthony Bourdain's episode, which I religiously watched as part of my pre-departure research. He tried to redeem the Filipino cuisine and show the rest of the world that it's got great food, despite not being known internationally for having great food. Well, if you're Anthony Bourdain, it's probably easy to find the best sisig or lechon kawali in the country, but if you're Anne and Monica on a budget and tight schedule, it may not go so easy.

We found a few dishes that we enjoyed, but overall, Filipino food was underwhelming. With the caveat that we didn't eat any home-cooked meals, our judgement is based solely on eating out at restaurants. I apologize in advance if my statement offends any of my Filipino friends back home. I myself would get very offended if someone told me Romanian food sucked. But I also know that in my country, home-cooked dishes often taste way better than their restaurant counterparts. So, I'm totally willing to give Filipino cuisine another try and maybe then I'll feel just as elated as Anthony Bourdain did.

Briefly said, Filipinos eat a lot of fried pork. Like HELLA. They even eat it for breakfast with sausages and rice. I mean, the entire Filipino breakfast consists of: a bowl of plain boiled white rice, a fried sausage or two and a fried egg. No wonder that a lot of people are a bit overweight. Fish and vegetables are not as prevalent in their diet as I'd have expected from a tropical insular country. 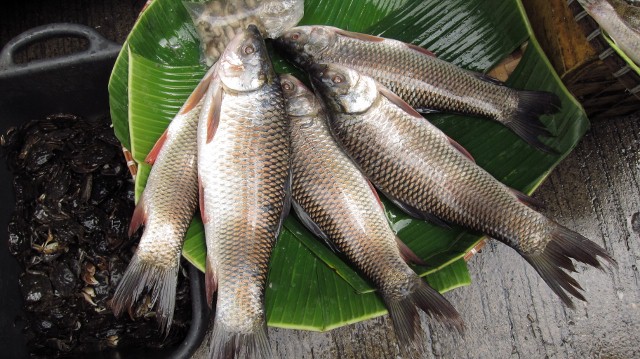 Fresh fish for sale at the big produce market in Baguio. 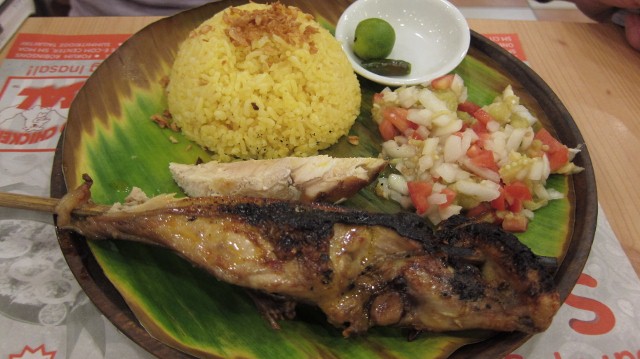 Above: chicken inasal. Barbeque chicken, marinated in native herbs and spices and grilled on a stick. The word "inasal" comes from the Spanish word "asar." The locals had a hard time pronouncing the "r", so in time the word changed to "asal" > "inasal" 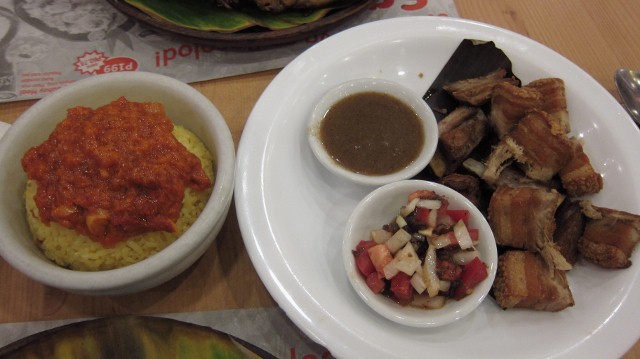 Above: lechon kawali. Cubes of pork meat with crunchy skin on top of soft and tender meat with a lot of fat. This was served with bagoong (salted shrimp paste) and talangka rice (rice topped with crab fat.) 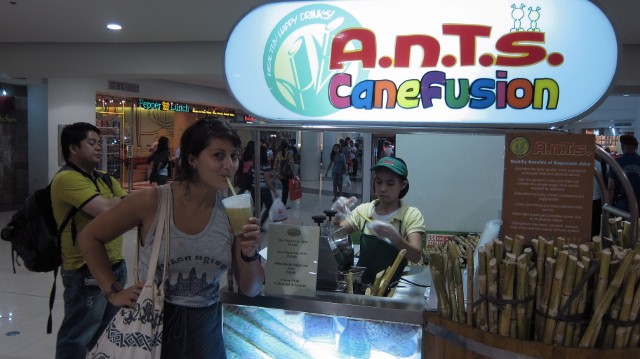 Similar to its neighboring countries, the Philippines is big on sugarcane juice. You can find it almost everywhere, in malls and markets. Anne got me into trying it first in Thailand and I've been hooked on it ever since. Every tine I see a stand on the street that sells sugarcane juice, I always get me some. Sugar cane is extremely good for your health:  it hydrates the body quicky when exposed to prolonged heat and physical activity. It has low glycemic index and does not contain simple sugars, so it can be consumed by people with diabetes. It detoxifies the body and lowers cholesterol. It cures sore throat and helps prevent colds. It helps fight breast and prostate cancer due to its alkaline nature. It strengthens the heart, kindneys, lover, brain and the overall immune system. 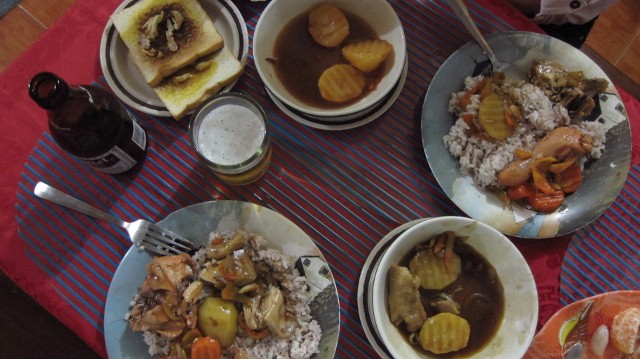 The food we ate in the north of the country (north Luzon area) was not very tasty, I think mostly because the guesthouses and restaurants catering to tourists either wanted to maximize their profits by putting bad quality ingredients and charging a lot or because they just didn't know how to cook better. Above: chicken adobo, somewhat the national dish in the Philippines. Here's some background info on what adobo is and where it comes from, via Wikipedia:

Adobo (marinade in Spanish) refers to the immersion of raw meat in a  sauce made of paprika, oregano, salt, garlic, and vinegar to preserve and enhance its flavor. In antiquity, meat and fish were difficult to conserve. Cold facilitated the conservation of food, but the weather often did not provide low temperatures ideal for preservation, so it was necessary to apply other techniques, such as adobo. Animals were usually slaughtered in the coldest months of winter, but surplus meat had to be preserved in the warmer months. This was facilitated through the use of adobos (marinades) along with paprika (a substance with antibacterial properties). Adobo was employed initially as a method of food preservation, but in time, with the advent of refrigeration methods, it came to be used primarily as a method of flavoring foods before cooking.

However, the Filipino adobo is a completely different thing: "In Filipino cuisine, adobo refers to a common cooking process indigenous to the Philippines. It should not be confused with the Spanish and Latin American adobo, as they have different origins and refer to different dishes despite sharing the same name. When the Spanish invaded the Philippines in the late 16th century, they encountered a cooking process that involved stewing with vinegar. The Spanish referred to this method as adobo due to its superficial similarity to the Spanish adobo. Nevertheless, the Filipino adobo is an entirely separate method of preparing food and is distinct from the Spanish marinade." 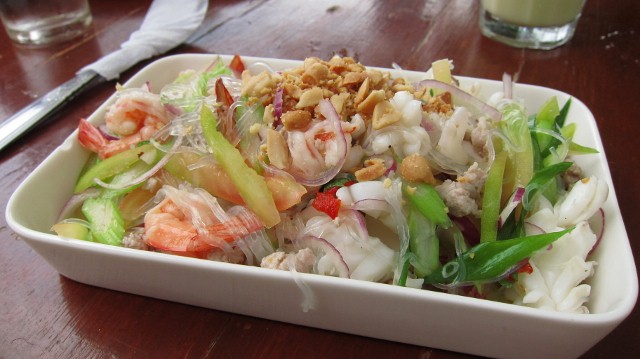 Above: glass noodle salad with seafood. This is actually more of a Thai dish, which I ate at a restaurant on Alona beach. Nevertheless, I'm showing it here because I really liked it. It had the perfect ratio of spiciness and crunchiness. The salad contained cold glass noodles, green onion, squid, shrimp, bell pepper, roasted peanuts, shallots and other veggies. It was refreshing and absolutely delicious. 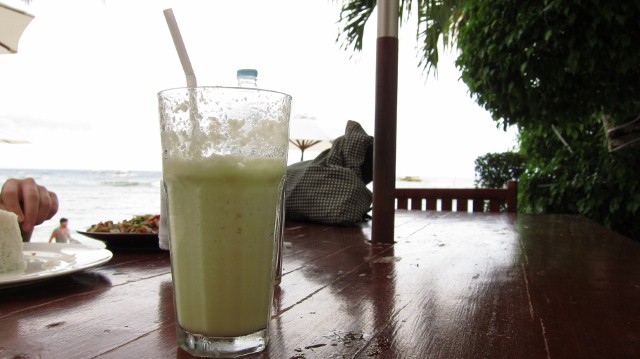 Another Philippines favorite: green mango shake. Anne and I loved it so much, that we got one every day. It's a shake made of green, unripe mangoes, therefore it's tart and refreshing. Shakes here tend to be too sweet, because they always add a lot of sugar. You always have to tell the waiter to add less sugar or no sugar at all, depending on what type of fruit you're getting. But with green mango shake, they can add sugar as they please and it's still tart and perfect. Quite refreshing on a hot day on the beach. 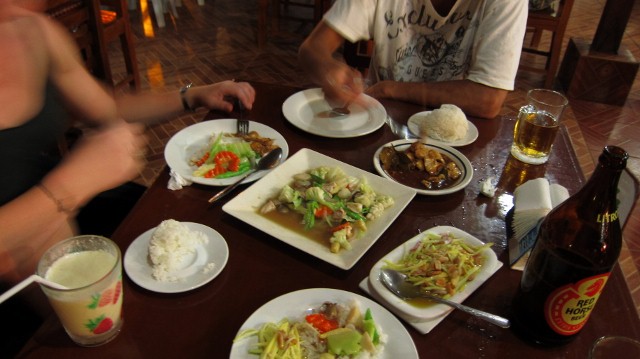 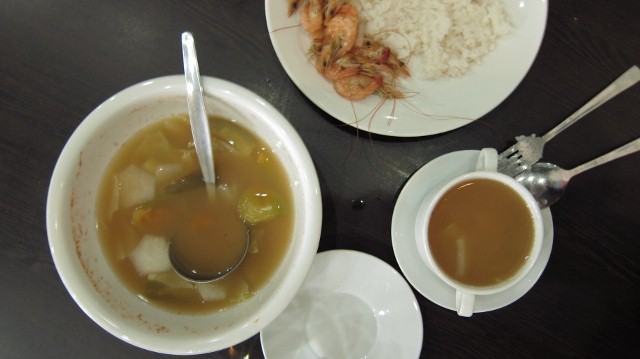 In the photo above is my favorite Filipino dish and as of now one of my all-time favorite dishes: sinigang. Sinigang is a clear-broth soup with an intense sour flavor. The sourness comes from tamarind (sampalok). The soup can be made with either fish, shrimp, pork or chicken. I had it twice, once with milkfish and another time with shrimp. It's seriously delicious. In terms of sour soups, I rank it high up there with the likes of Tom Yum (Thai) and Ciorba de vacuta (Romania). The three best sour soups of the world. 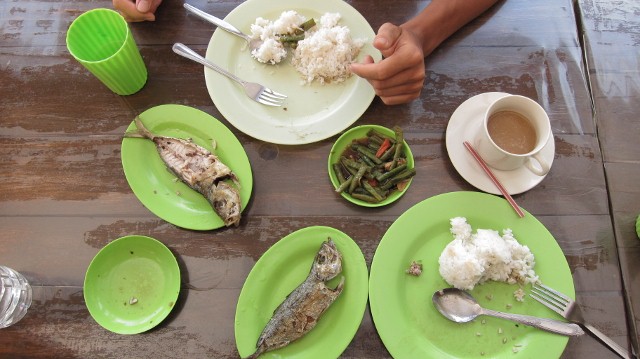 Cheap breakfast at a joint where local people eat. Basically, there's a lot of locals on the beach that cater to tourists: drive tour boats, offer massages, etc. They all need to eat, but can't afford to eat at the overpriced tourist restaurants. So they have this little shack on the beach that sells food just for them at a cheap price. For breakfast we had one fried fish, boiled rice and sauteed string beans. The fish turned out to be mackerel, my favorite fish in the world, so that morning I was one happy camper. For all this, a coffee and a big bottle of water I paid $2. 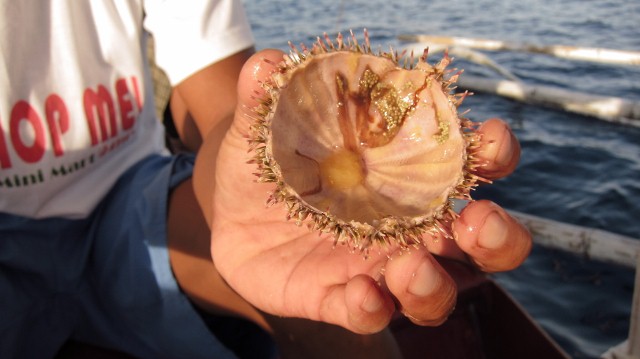 Above: a sea urchin, ready to be eaten. You only eat the teeny tiny yellow roe at the bottom. 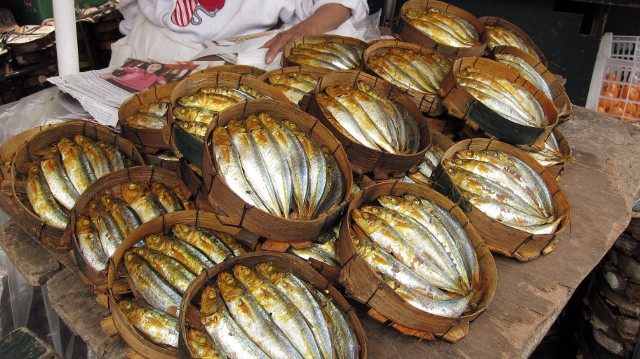 Above: smoked sardines for sale at the local market in Baguio. I didn't try them, as we were about to get on a 6h bus, but I was very tempted. 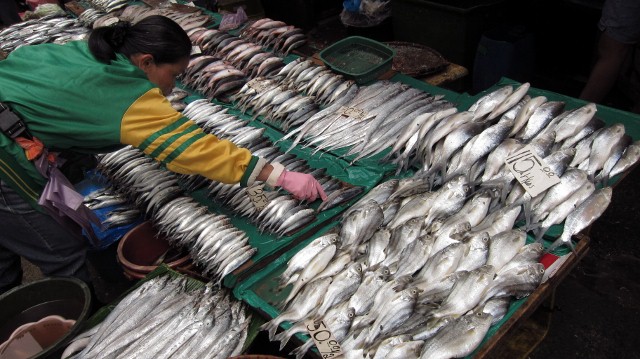 Fresh fish for sale at the local market in Baguio. 115 pesos per kg means around 3 USD/kg. To compare, fish at restaurants on the beach was sold at 200 pesos per 100 grams. Tourist prices are astronomical compared to what food actually costs in local markets. I'd be really happy to pay more and know that the money goes into the pockets of local people, but sadly the money ends up in the full pockets of a rich resort owner. If only the locals had the business know-how to open up their own tourist joints and cash in the profit themselves. 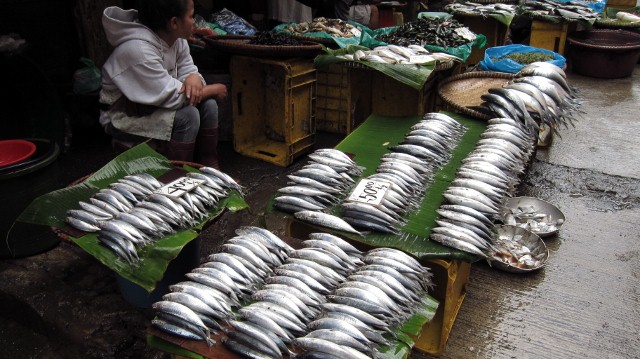 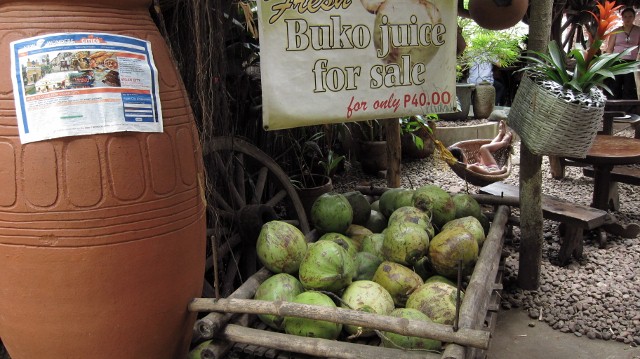 1 USD for one coconut. 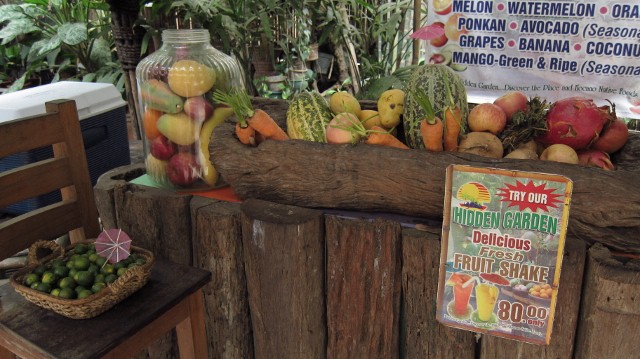 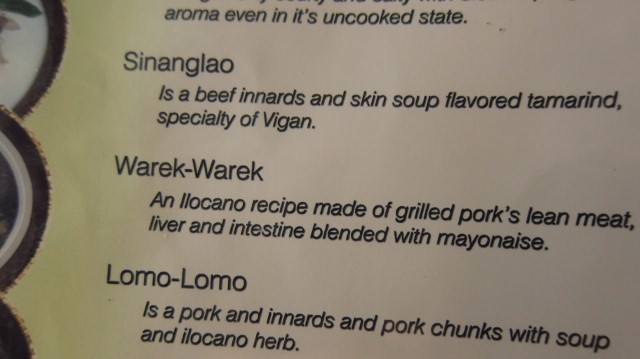 I may have found the most disgusting dish ever: pork liver and intestines blended with mayonaise. Triple ew! 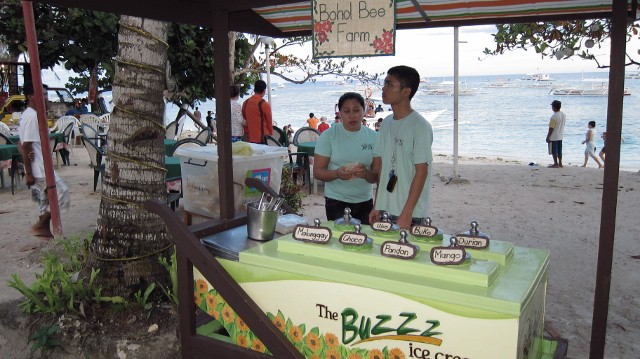 We finished our Philippines extravaganza with ice cream from Bohol Bee Farm. The cone was made of deep-fried rice flour, it was crispy and tasted like a tortilla chip. They even had durian flavor, but we didn't try that one.
by Monica S.