Read "The Collector" by John Fowles

Books are a luxury these days. I think Monica had the right idea purchasing her Kindle. It's easy for her to buy books on the Internet--she can pretty much find any book she wants to read, purchase it and download it wirelessly to her Kindle in a matter of minutes. I, on the other hand, struggle to find a bookstore with books in English. Even if they have books in English, I'm limited to whatever small assortment of books they have. Something about me just wants the hard copy. I want to feel the pages and smell the ink. Did you see "Midnight in Paris"? Maybe this is a case of nostalgia. I should probably get over it.

Anyway, while in Buenos Aires I bought three books, which didn't last me too long with our never-ending bus rides and layovers. The first two books didn't do it for me, but as they say, the third time's the charm. 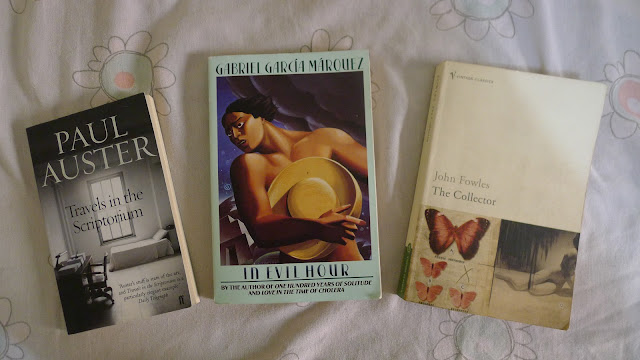 1. Travels in the Scriptorium, by Paul Auster (2007)
I thought this was going to be a good book several pages in, but I got less and less interested the more I read. The central character is an old man who might or might not be locked in a room. All that's in the room is a bed, desk, chair, old photos and a manuscript. He cannot remember why he is in that room, or much of his past at all--just that he feels a tremendous amount of guilt. People from his past come to visit him, but don't reveal much about who they are or why they've come. He is being watched by a camera that captures one photo per second of his room around the clock. It wasn't a very rewarding book for me, more than anything it frustrated me.

2. In Evil Hour, by Gabriel Garcia Marquez (1962)
I read (most of) One Hundred Years of Solitude and absolutely loved it. I like Marquez's magical realism and ways of describing (the multitude of) his characters. But, I was unsatisfied with In Evil Hour. Everything pretty much goes to shit in a small village in Colombia. An anonymous person has started posting flyers around the village that tell secrets about its inhabitants--this is the book's focus. It's too short and I didn't really know enough to care about its characters. I thought about giving up on it halfway through, but decided since I paid about $25 for it, I should finish it.

3. The Collector, by John Fowles (1963)
I thoroughly enjoyed reading this book. I tried to read it slowly because I didn't want it to end, but it was such a page-turner it didn't end up lasting too long. The book is about a lonely English man (Frederick) who wins a grand sum of money. He is obsessed with a beautiful art student (Miranda) who he follows around town. Frederick is a collector, and with the power that his new money brings him, he expands his collection: Miranda becomes his latest possession. The first half of the book is written from Frederick's point of view. The second half is from Miranda's. Fowles is an excellent storyteller and often I found myself wondering how someone could have such a miraculously detailed imagination. I wonder if he was investigated after this book came out--that's how real it seems. I enjoyed the themes of power, money, art, God, freedom and humanity. Frederick and Miranda are such different people; it's interesting to witness their forced interactions.

After finishing the book, I came across this song that really feels like Miranda's voice. I must have listened to it two dozen times on the 24-hour bus ride to Rio:

The Dø - Too Insistent (Trentemøller Remix)

Let me know if you've read any good books lately; I'll try to find a way to get my hands on them.
by anne