I've procrastinating writing this blog post for a while now... I guess I am not very excited about the subject matter. At first Anne and I were going to merge our photos into one joint post, but I didn't have my photos ready in time (that means selected and resized for upload), nor did I feel like taking the effort. So here I finally am ready to do it.

For those who don't know, Iguazu Falls is a big waterfall located at the border intersection of Argentina, Brazil and Uruguay. Both Brazil and Argentina claim some part of the falls, but the more impressive part is on the Argentina side, thus the hoards of tourists coming here to see it. On the Argentina side there's a small town called Puerto Iguazu that exists (and probably was created) just for tourism. On the Brazil side (which is only 20 minutes away by bus), there lies a bigger town called Foz de Iguacu. This town is not very touristy, it's bigger and seemed more industrial to me (I think they had a water energy plant there.) 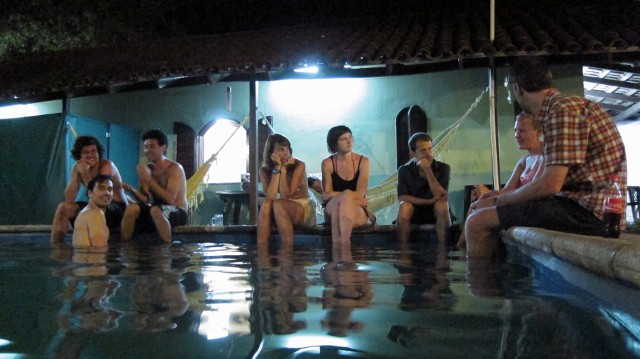 After freezing our asses off in Patagonia (and feeling sorry for the locals in Punta Arena that call "warm weather" the 50 degrees they get in summertime), we jetsat (I just made up that word, I think) to Santiago de Chile, then Buenos Aires, then Iguazu - jumping over half of the South American Continent and over 30 degrees Fahrenheit. On January 3rd, we were comfortably chilling by the pool at our hostel in Iguazu and feeling that life was really good to us. 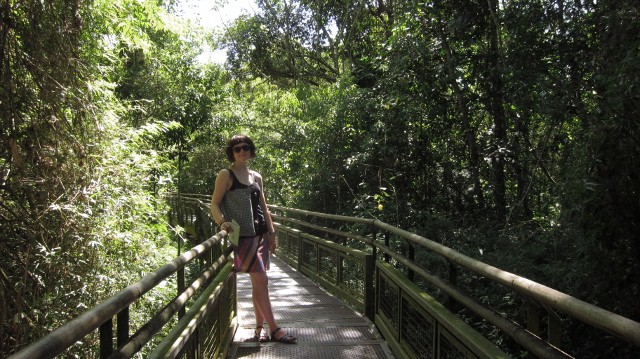 The next day we headed over to the national park Iguazu Falls, the reason why thousands of people come here every day. It was pure circus. I've never been to Disneyland, but Anne said it reminded her a lot of Disneyland. This waterfall might be Argentina's cash cow. The price of a ticket to enter the park is 100 pesos for non-Argentine residents (which is about 25 USD), the entire park has paved trails and it's full of people. If you know Yosemite at high peak tourist time, then triple that and you'll get Iguazu. Making the natural attractions of the park very accessible to anyone means that entire families with kids, babies in strollers, grandmas, etc. are all over the park. Hoards of people. You have to walk slowly everywhere; it's like a march of ants. Besides that, you have to wait in long lines for everything: to buy your ticket, to get the ticket stamped at entrance, to refill water, to get on a train inside the park, to get on a boat, etc. Lines, lines, lines... in 80 degree weather... 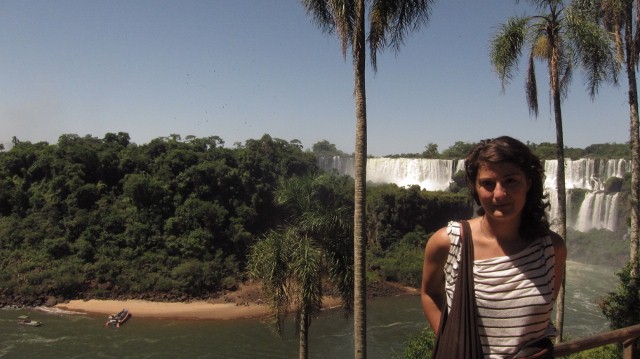 But somehow it's worth it. The views make up for it. This waterfall is extremely beautiful, surrounded by lush nature, real jungle and lots of wildlife roaming around. We saw tons of birds, butterflies, monkeys, lizards - despite all the hoards of humans nature still dominates. Here in the background you see a little island in the middle of the river at the base of the waterfall. A boat takes you there for free, and you can hike around the island or swim on that little beach. Unlike other waterfall experiences you may have had, the water here is really warm, because it comes from a river that flows calmly before it turns into a waterfall. 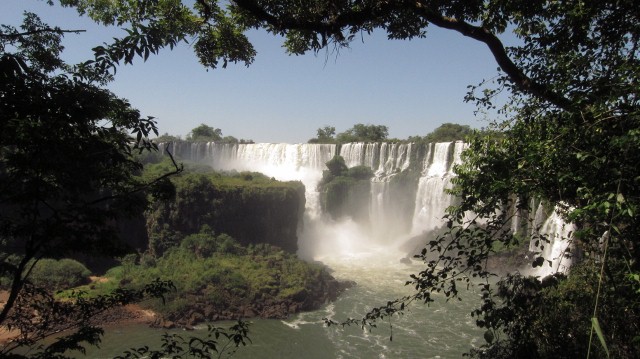 Vista point of one side of the Iguazu waterfall. 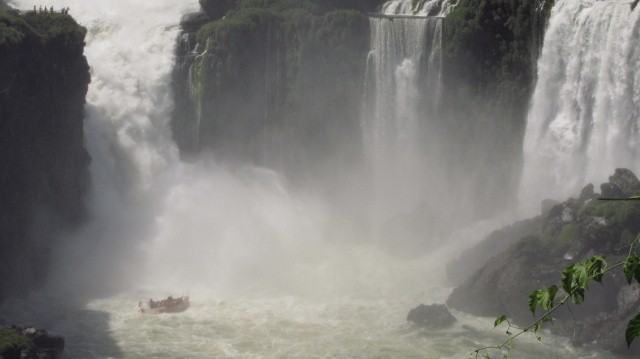 The boat you see there goes straight towards the waterfall until you get completely drenched and by the heavy downpours of water. We took that boat later when we got to the bottom and we really loved it. The water is so strong and so powerful when it falls on you, that after a few seconds it feels like you can't breathe anymore. But the boat stays there only for a few seconds anyway, after which it moves back, and then goes forward again. 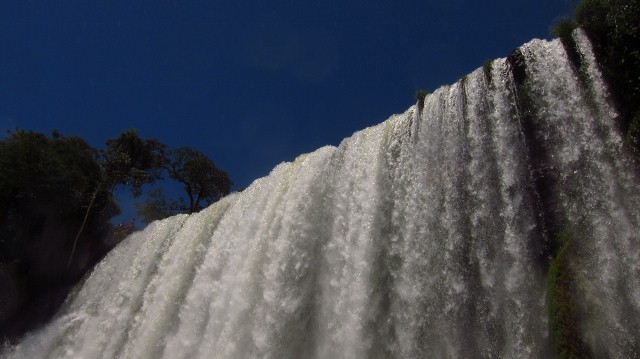 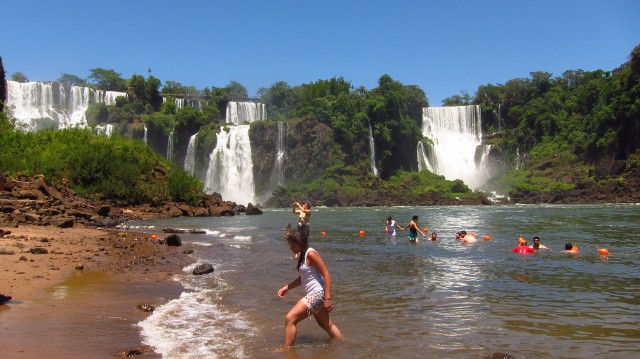 View of the waterfall from the little island where we took a dip in the water. 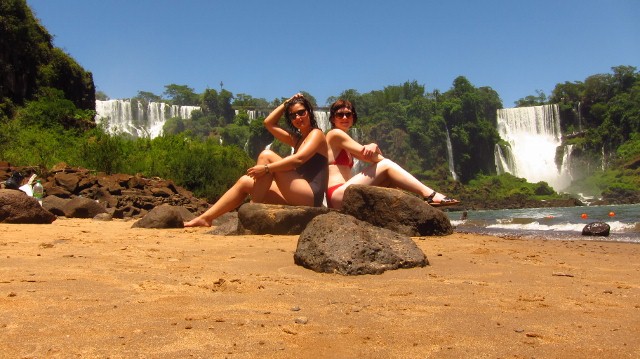 And now a Beached Whale and a Snow White. I am unhappy about the many pounds I've put on in the last couple of years, Anne is unhappy about her current lack of tan, but you know what, this is still the beginning of our trip and day 1 of beach time! We're each on a mission here. 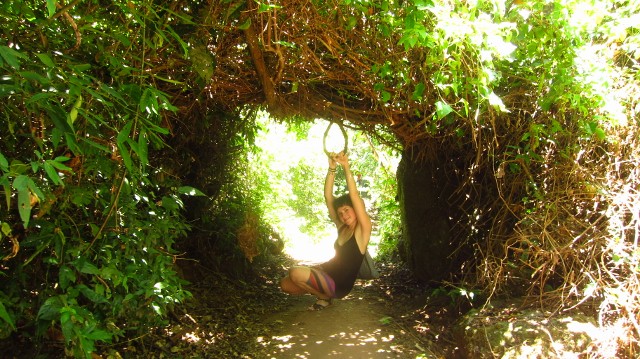 Yet another adorable photo of Anne. 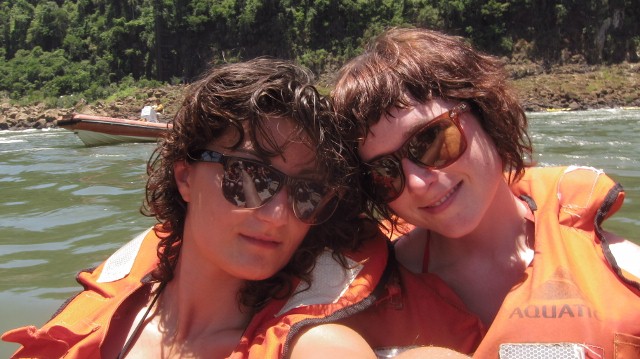 This is the "before" in "before and after." When we got on the boat, before we got completely drenched. (Not in the San Francisco Creatures of the Loin meaning of the word, mind you.) 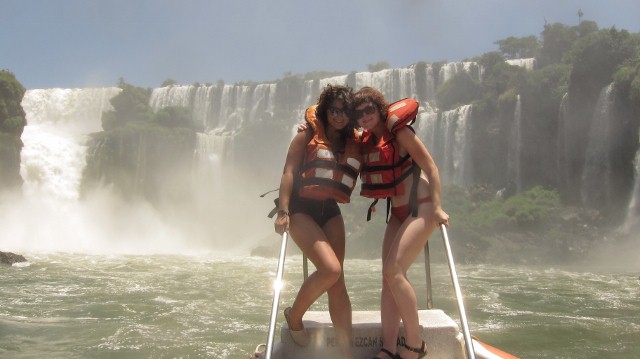 On the boat, before going full-speed into the whiteness behind us. 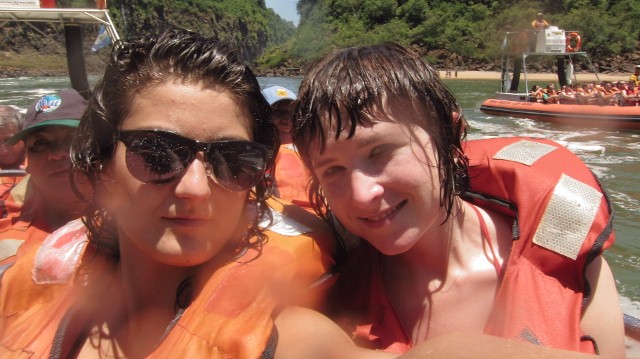 The "After" photo. Completely wet, even the camera got a few splashes on it, despite the fact that we kept it in a waterproof bag the whole time. 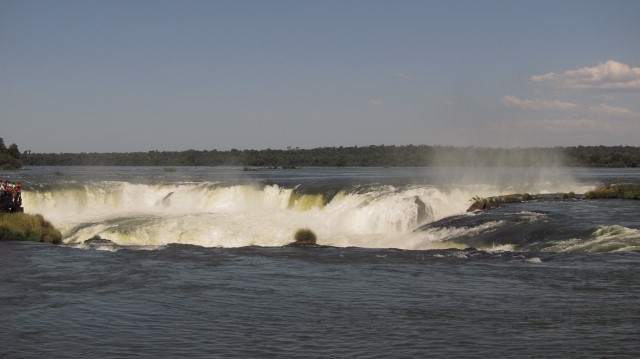 At the top of the waterfall everything is calm, it looks flat and serene. I can't help but wonder if back in the old days people went in boats on the river, didn't see the waterfall and fell into it. From the river around the top of the falls you can barely tell what's about the happen. If feels as if one piece of earth fell down at a perfectly vertical angle. Or as if someone sliced the earth like a piece of cake. 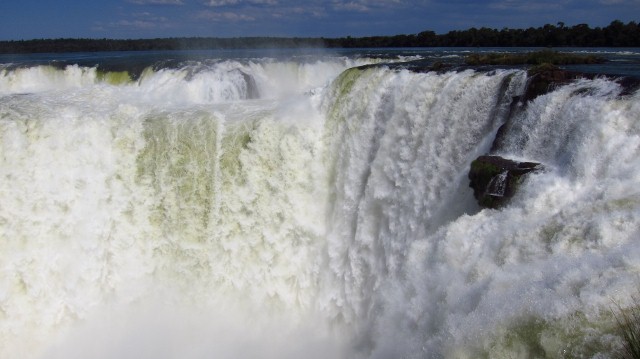 And then this is how it looks like when all that river falls down. The name of this section of the waterfall in Spanish is Gargantua del Diablo. "The name Iguzu comes from the Guaraní word for "great water." The first Spanish explorer to see the falls was Álvar Núñez Cabeza de Vaca in 1541. Taller than Niagara Falls, twice as wide with 275 cascades spread in a horsehoe shape over nearly two miles of the Iguazu River, Iguazú Falls are the result of a volcanic eruption which left yet another large crack in the earth. During the rainy season of November - March, the rate of flow of water going over the falls may reach 450,000 cubic feet (12,750 cubic m) per second." - quote source 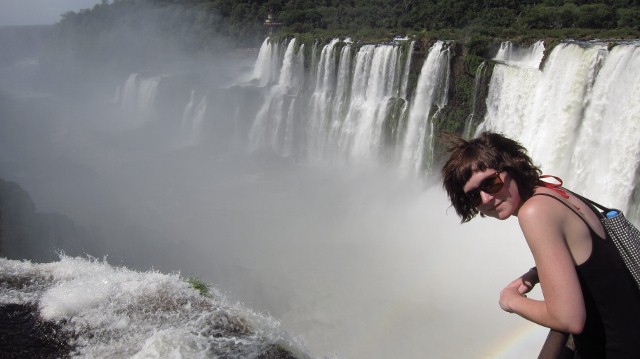 Anne at the top of Gargantua del Diablo. 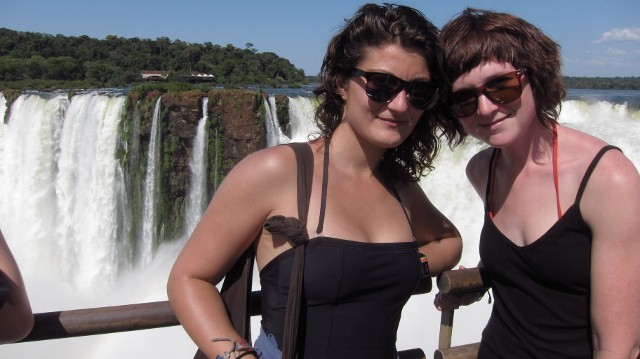 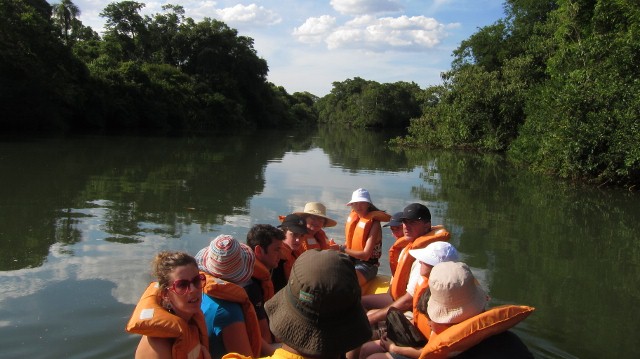 After we were done with the waterfall, we took a half hour chill cruise through the delta located above the waterfall, on an inflatable row boat. The boat went through narrow canals covered by the canopies of dense tropical forest.We saw monkeys jumping from one tree to another, from one side of the canal to the other. We rowed under a tree that had these tiny orange fruit (like miniature oranges) A baby monkey was hanging from her hind legs on the tree, while picking the fruit and eating it with the front legs. I picked one fruit too, peeled it and started eating it. It had 2 big seeds inside covered with a thin layer of white pulp. I asked the guide if it's ok to eat it and he reprimanded me for eating fruit from a national park, which apparently is not allowed. Oops... 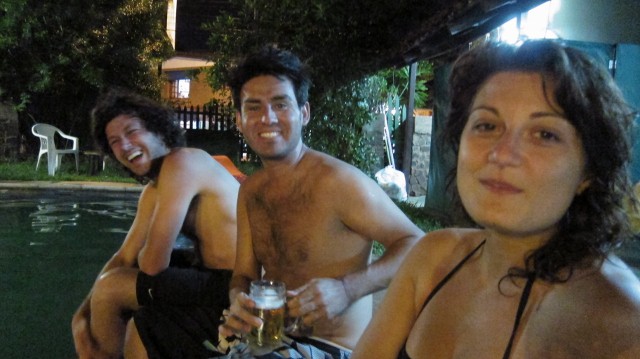 Back at the hostel, we met a few nice and fun people, like these two Argentine boys, Marcos and Guille and hung out by the pool until late at night when the staff kicked us out. To all my girlfriends back home who were asking and wondering if we met any hot Argentine men... well, we did not meet any while we were in Buenos Aires, but luckily Iguazu saved its country's reputation.