Rio de Janeiro was an incredible city and I feel like we only skimmed the surface in our week there. We spent the majority of our time at one beach or another, which is a big part of the Carioca (people living in Rio) culture. Monica's former co-worker from StumbleUpon, Bruna, met up with us for our time there, which was great not only because she was fun to hang out with, but also because she speaks Portuguese. Bruna was born in Brazil and her family immigrated to the U.S. when she was five years old. She'd been to Rio twice before, so she had the low-down on the best places to go and things we must do (like eat açaí bowls).

Monica and I stayed at a hostel in Ipanema the first two nights before Bruna got to town, and then moved to a hostel in Copacabana for the remaining time with Bruna. Both hostels were pretty crummy, probably the worst hostels we've stayed at yet, but were in excellent locations near the beach. Many things in Rio are quite expensive (like hostels and buses to Rio), while others are inexpensive (sucos and street food). We went a little over budget during our stay, but we're making up for it now in inexpensive Bali.

We weren't able to reserve a hostel spot in advance because everything was booked, so when we arrived, we asked the taxi driver to take us to the happenin' hostel spot in Ipanema--the little alley in the photo below.


Once we found a couple beds, we went straight to the beach. It was a little overcast, but still hot and enjoyable weather. This was our first taste of the fun beach culture in Rio--lots of hot bods and vendors selling food, sarongs, bathing suits, hats, jewelry, etc.

The men on the beach all wear short shorts (bathing trunks) if they are Brazilian. If you see a guy in regular swimming shorts (down to the knee) you know they are foreign. The women wear regular bikini tops, but the bottoms are a bit different--the fabric is cut in, exposing almost all of the bum. Monica, Bruna and I really stood out with our prude bikini bottoms. Also, everyone is tan. 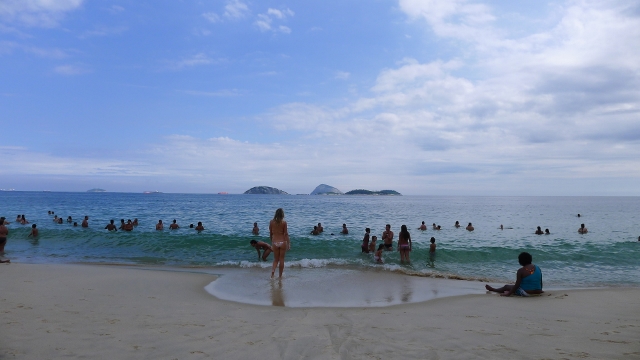 People like to play sports on the beach. Below is a photo of people playing footvolley. It's basically volleyball, but instead of using your hands to toss the ball back and forth, you use every part of your body except your hands. 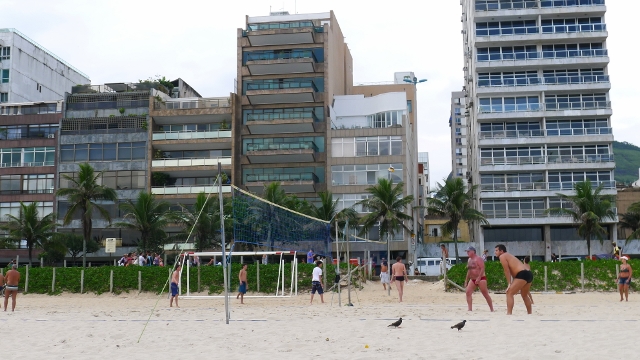 The most popular spot on the beach is by far the gay section--marked off by rainbow flags. It's packed nuts to butts! 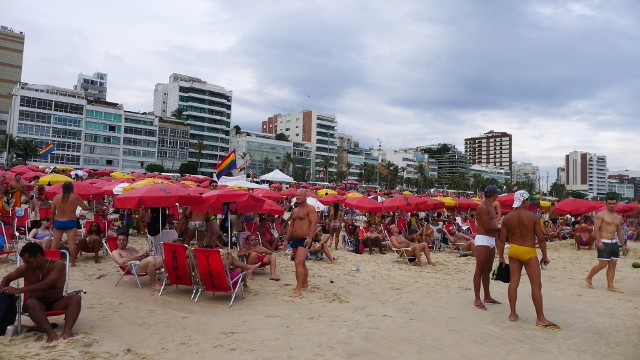 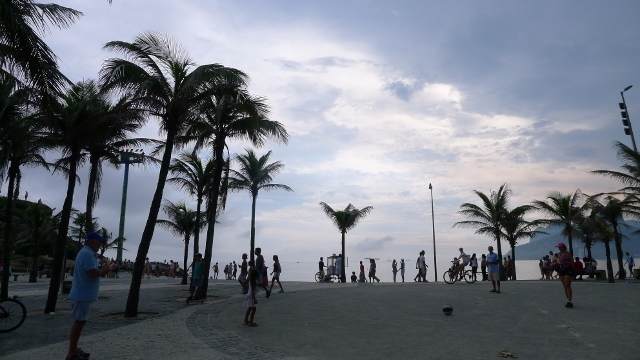 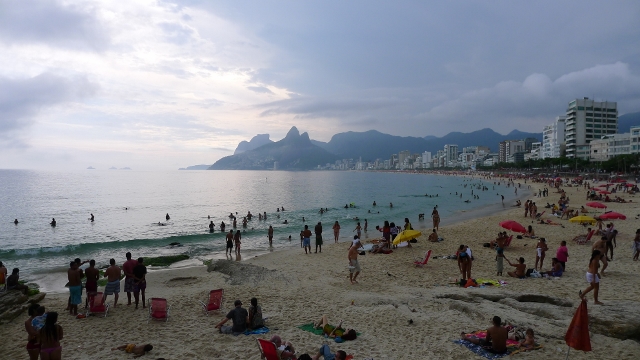 We walked from the end of the beach at Leblon all the way down Ipanema beach to the rocks that separate Ipanema from Copacabana. Map here. 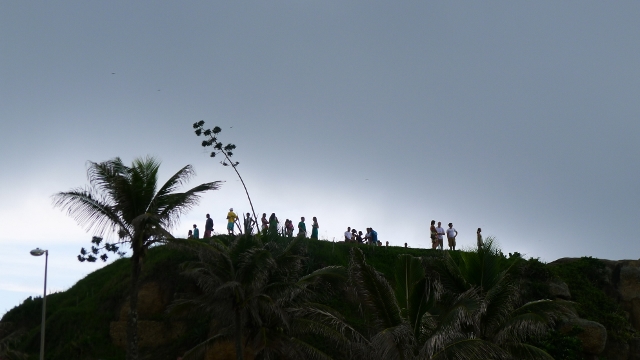 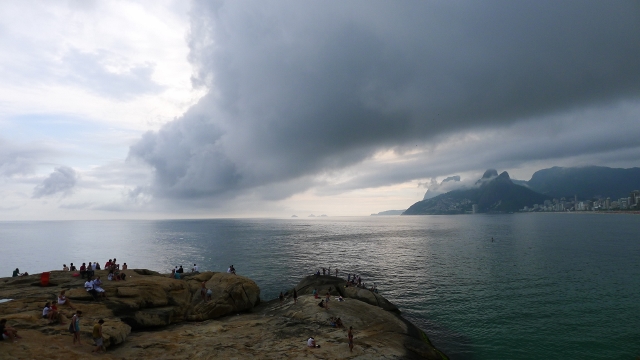 Walking back to our hostel, we spotted "Potty" but didn't buy anything.

Day two was spent back at the beach. Bruna arrived on day three and we ... went back to the beach. It's a good thing we went when we did because the following days were a bit rainy and overcast.

The next day we went to Centro, Rio's downtown. 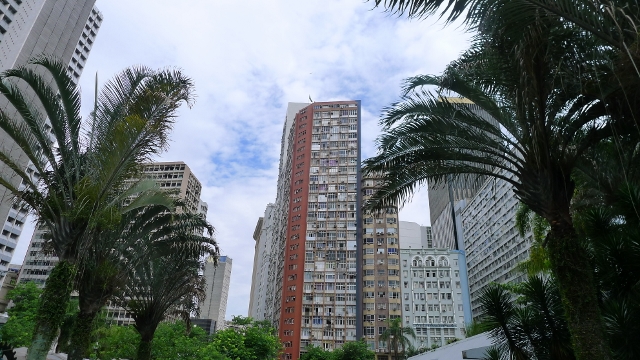 Next, we went to Santa Teresa, a historic neighborhood with beautiful architecture, tourist shops and cafes. There used to be a street car that took you from Centro to Santa Teresa, but after an accident back in August, it got shut down. I'm not sure the politics behind the sign in the photo below, but this image was posted all throughout the neighborhood. On the way out of Santa Teresa, Bruna asked our cab driver a few questions about the accident and he started crying. She quickly changed the subject. 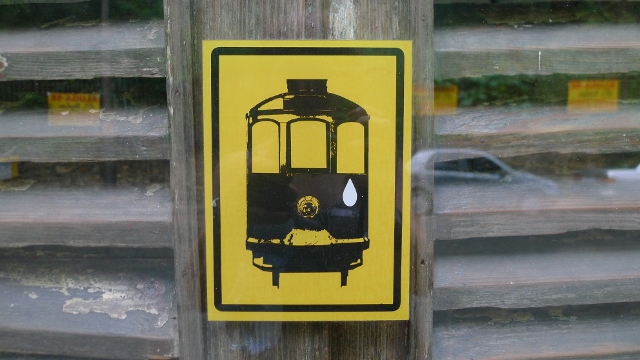 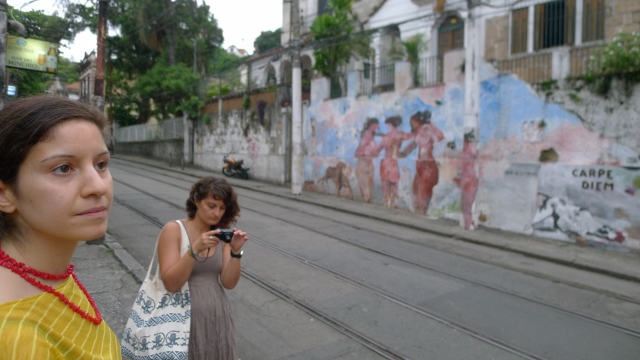 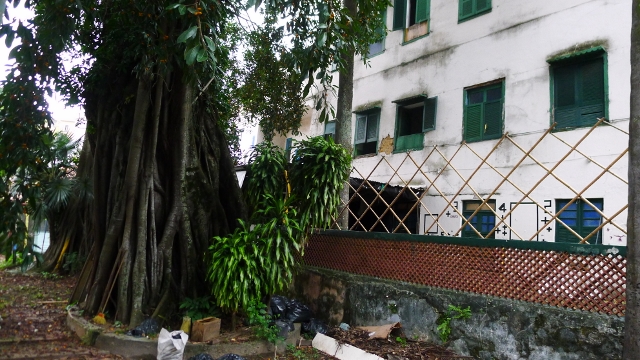 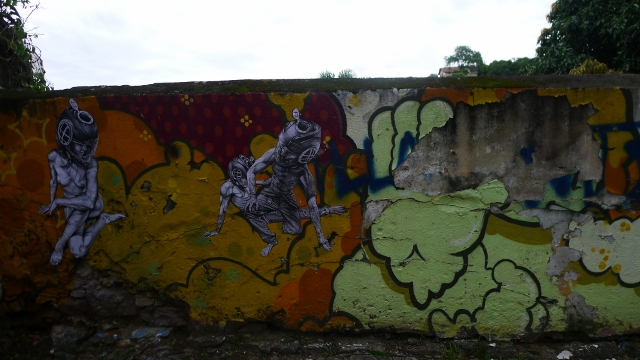 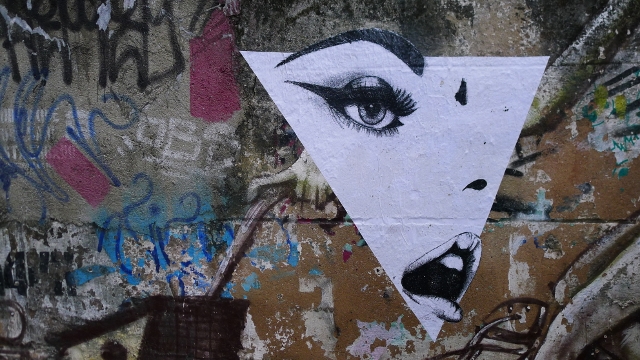 We stopped at a quirky cafe for an afternoon pick-me-up.


Then we went to Lapa, Rio's party area. We heard live samba music coming from outside a bar, so we asked our cab driver to let us off. There was a cover charge to go inside, so we just hung out on the sidewalk (we could still hear the music) and danced with a group of locals. Samba dancing is hard. You think you can do it, but if you really try, you realize how fast your feet have to move. The locals got a kick out of watching us try to keep up. 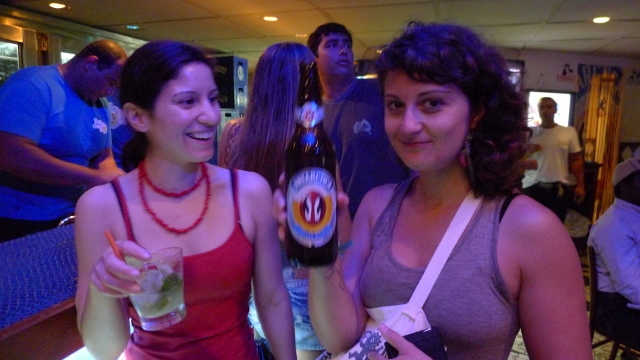 After the band finished (and the cover charge ended), we went inside. I tried to order a suco but the lady taking drink orders wasn't having it. She just straight up pretended like she didn't know what I was talking about and shook her head "no". I gave up, frustrated that I'd been singled out as a tourist and unable to order a drink. Bruna was later able to order me the suco.

This brings up an interesting point. Most Brazilians do not want to speak English (or Spanish). They only want to speak Portuguese and they only want to hear you speak Portuguese. Even though I technically ordered the suco in Portuguese and I'm absolutely sure the lady understood me, she could tell I was foreign because she overheard me chatting with Monica in English, and then refused to serve me. I don't know why this is--maybe she's had bad experiences with foreigners before (?) but it really makes things difficult. Not everyone is like this, but we experienced it here and there. Luckily we had Bruna there to save us.

One of Monica's fillings partially fell out, so the next morning we went to a dentist to see if he could fix her up.


Bruna and I rented bikes and rode around the lake while Monica was getting her grill fixed. 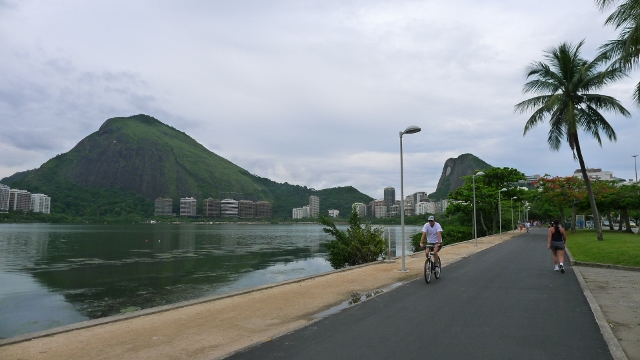 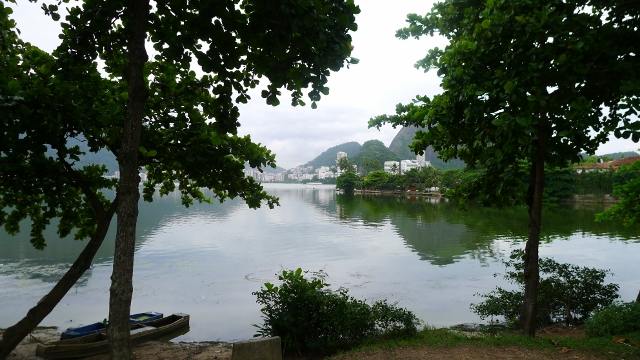 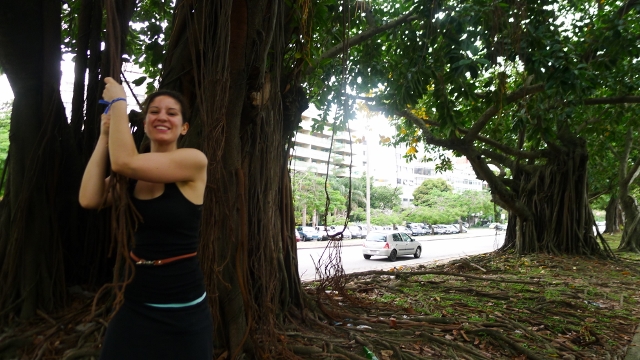 Later that night we went to the tallest hotel on the Copacabana strip and took the elevator to the top floor.


Below is a random photo to show you how struggling our hostels were. I unintentionally didn't take any real photos of the room (I guess I don't want to remember it), but I did snap this one and only shot--these thin little wooden sheets (basically pieces of paper) were holding up our mattresses. Bruna sat down and tore the thing apart. You would think she's the Hulk, but really she's just a tiny lady sitting quaintly down on her bed. Monica and I then looked under the rest of the mattresses and noticed they were all broken, too.

Out on the town again, chilling at a bar/restaurant on the Copacabana waterfront. 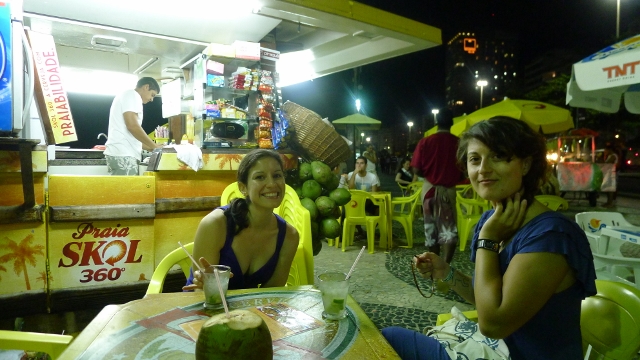 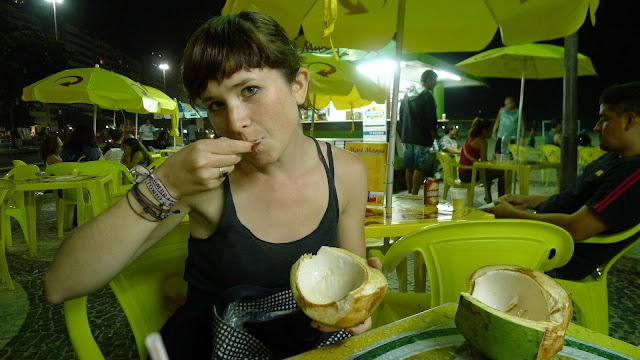 The next day we decided to take a trip outside the city to a resort town called Buzios. We took the 2.5-hour bus there and then rented a buggy (pronounced boo-gie). Long story short, it ran out of gas because the gas gauge didn't function properly and we got fed up and returned it. But it was fun for the hour we had it. Monica has one photo to prove we rented it. 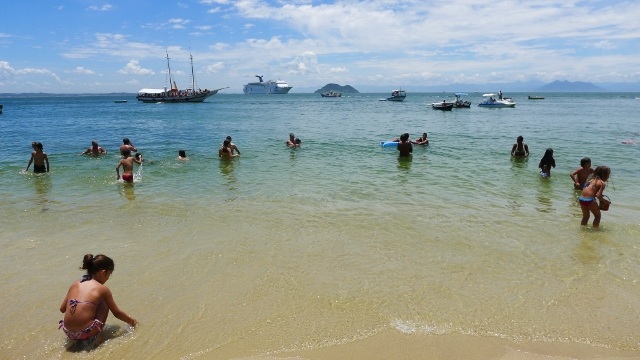 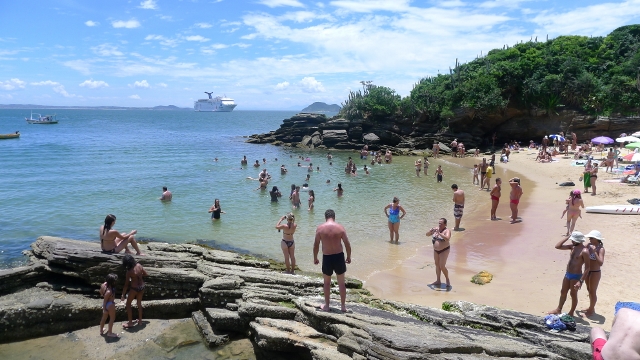 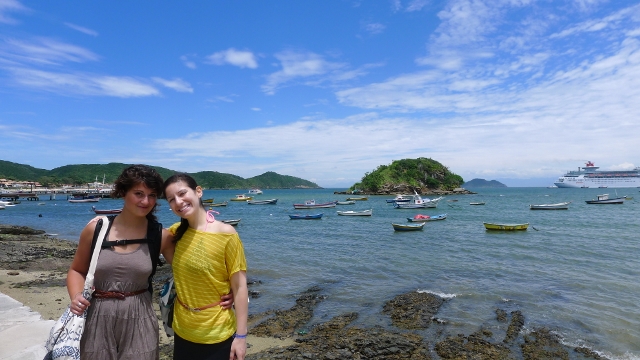 We took the bus back to Rio and went to Lapa once more for the big Friday night street party. It was absolutely insane, kind of like Bourbon Street in New Orleans or Sixth Street in Austin. Pretty struggling--just a focus on drinking and partying, not live music like I'd thought. Anyway, I didn't last too long because all of a sudden I started feeling deathly ill. I didn't know if it was an effect of being around all those trashy party people or what but I couldn't stand up and I was light-headed. I took a cab back to the hostel on my own and went to bed.

That night proceeded to be one of the worst nights of my life. The following two days and nights were spent in my sick bed, the lower bunk of a six-person dorm room with no air conditioning. My new ritual was wetting my hair in the shower and then letting it dry with the breeze from the fan in the room. It was keeping me alive ... my only relief. I was worried because we had the biggest flights of our trip coming up and I wasn't sure I'd feel better in time. Fortunately, I was able to get out of bed and walk around a bit the day we left Rio.

Bruna, Monica and I went to the beach one last time and I was thankful the sun was tucked behind the clouds. I ate a piece of watermelon, which brought a slice of life back into me. Monica and Bruna went to a restaurant for lunch, but I couldn't be around the food smells, so I took a little stroll. I didn't have to go far before I ran into some live music. It was mostly an older crowd, drinking on a Sunday afternoon. The musicians played what seemed to be classic songs, both Brazilian and Italian, and everyone sang along. The microphone was passed to several of the crowd members, who initiated songs and broke down the disconnect between performer and spectator. People cried, danced, clapped and whistled--so much life and so inclusive. This is what Rio is all about. Cariocas enjoy living. 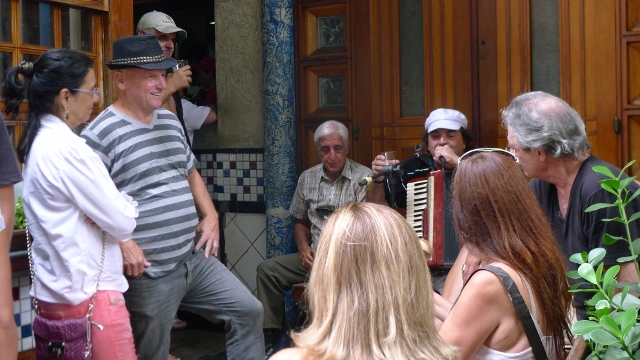 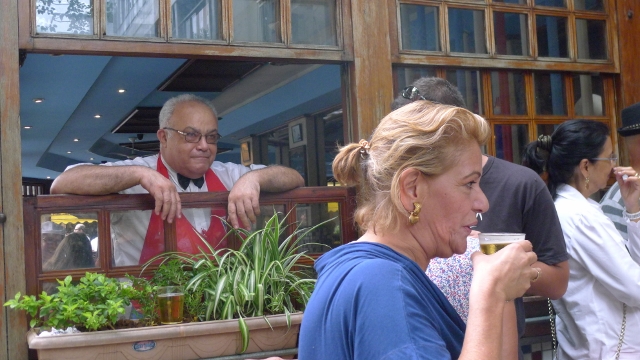 Of all the places I've been so far, Brazil is on the top of my return list. It feels like there's a mysterious underbelly to Rio that I wasn't able to penetrate in the short time I spent there. This city definitely leaves you wondering ...
by anne