We are now in Rio de Janeiro, after a hellish 24-hour bus ride from Puerto Iguazu. It was the most expensive bus we've taken so far, and unlike the other rides, they don't provide any food and they make a million stops along the way at different bus stations to drop off and pick up people. We had to switch buses in the middle of the night because it was raining and our bus was leaking water from the roof onto us. Also the A/C didn't work, so everyone on the bus was complaining and fanning themselves until the sun went down. All of this to say that we are incredibly excited to be off the bus and in bustling Rio.

Before this, we spent a couple days in Puerto Iguazu, the Argentinian city closest to Iguazu Falls. Foz do Iguacu is the Brazilian equivalent, a jumping-off point for visiting the amazing waterfalls. To get to Puerto Iguazu, we took a 17-hour bus from Buenos Aires. I suppose we could have booked a flight from BA to Rio, but we would have missed out on this extraordinary natural wonder.

Puerto Iguazu is a great place to see the Triple Frontier, the tri-border area of Argentina, Brazil and Paraguay, where the Iguazu and Parana rivers converge, so we walked there on our first day in town.

Walking around the downtown area, we stumbled upon some funny mannequins in a Lacoste shop.

The next day we ventured off to the main attraction. Both Argentina and Brazil have parks with views of the falls, and most guidebooks tell you to visit both sides to get the full overview, but based on what other travelers told us, it seems the Argentinian side is best, so we decided to only go there.

Bridges and walkways lead you through the park, to many different waterfalls.


Boats take visitors around the park, and in the end we decided to "ball out" and take two of the main boat trips offered. The first takes you straight to the waterfalls, soaking you to the bone (which feels wonderful in the heat) and the other is lazy river style, rafting through the jungle.


Some might say the main attraction is the U-shaped Garganta del Diablo (Devil's Throat), which you access through a series of long boardwalks.

The park is very touristy and packed full of people. It reminded me a lot of a day at Six Flags or Disney World, just with fewer tramp stamps. At times it was difficult to deal with the crowds, especially in the heat. Everyone was trying to get the best photo and you basically had to elbow your way in to get a good look. That first day we did almost everything the park offered, except for one trail that takes you to a secret waterfall and the upper falls trail, that gives you a view of the waterfalls from above. I decided to go back the next day (half-price admission) while Monica stayed at our hostel, which had a pool, hammocks, and an outdoor kitchen and patio (can't blame her). 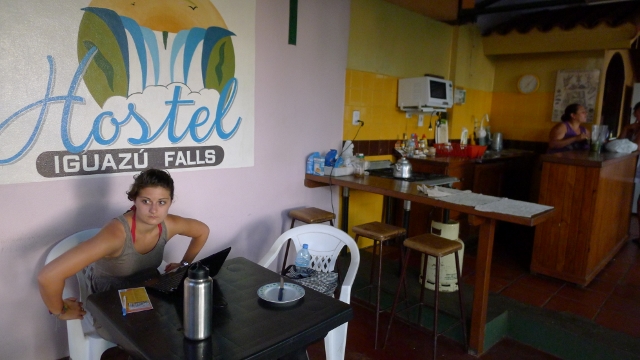 The Sendero Macuco trail to the secret waterfall is not paved like the other trails in the park, and it is also the longest trail (3 km each way), so most park visitors don't bother to go there, making it a nice respite in an otherwise overcrowded place.

Along the trail, I encountered wildlife, which really made me feel I was in the jungle. 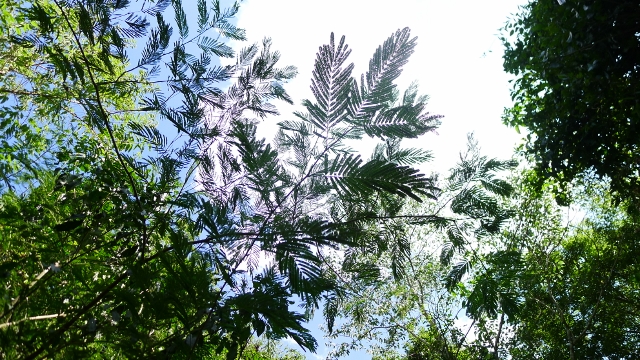 Most of the people on the trail appeared to be locals, which was cool. The waterfall itself wasn't that impressive, considering what you can see on the other side of the park, but the trail was beautiful and I think with any other surroundings this waterfall/swimming hole would be much more appreciated and frequented.

I then made my way to the upper falls trail for one last view. It's almost like I did a double-take, going back that second day, to make sure it was all real. 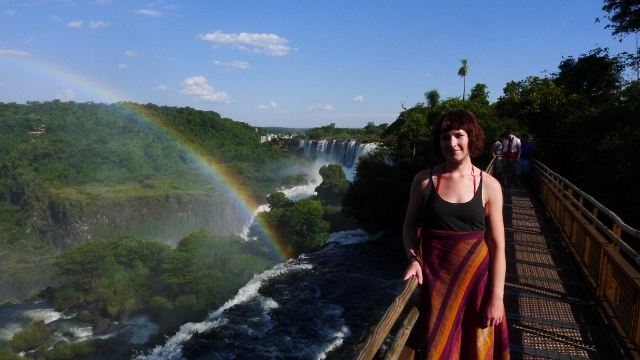 Compared to Niagara Falls, Iguazu is four times as wide and also taller, but to me I thought it didn't look as tall as Niagara, probably because of how wide it is. Niagara's version of the thrilling boat ride mentioned above is called the "Maid of the Mist" and is pretty fun, but everyone wears ponchos because the water is too cold and you only get misted, not drenched. It's not a speed boat like the one in Iguazu, and it only goes up to the falls once, rather than three times (two different waterfalls). Niagara is still amazing in its own way. I actually started tearing up on the Maid of the Mist when the guide announced, "This. Is. Niagara. Falls."

But the main thing I loved about Iguazu is how green it is. It is the jungle and you feel it when you go there. It is quite theme park-y, but makes up for it with the Sendero Macuco trail and the magnitude of the landscape. If you get the chance, I say visit Iguazu Falls.