We made it to Bali in one piece after four flights and about two full days of travel. Thankfully we had friends from San Francisco, Sara and Jesse, who've been living in Bali for the past three years to take us under their wing and welcome us into our next foreign land. Jesse picked us up on his motorbike/scooter and somehow we fit three people and four bags on it. We only had to drive a couple blocks to get to the house, fortunately. That was basically our introduction to the chaotic-but-functioning Balinese lifestyle.

Bali was definitely my favorite part of our trip so far, partly because of Bali itself, but also because of how cool it was to hang with Sara and Jesse--hostesses with the mostesses.

We learned a lot from S&J about what it's really like in Bali--the insider's perspective. They told us about the struggles to form and retain meaningful friendships in Bali. The locals have a different way of thinking about things and the ex-pats are challenging in their own way. A lot of them used to have drug addiction problems, thus they come to Bali, where drug traffickers are given the death penalty. They make it easier for themselves to stay away from drugs by being in a place where drugs are a little harder to come by.

There are almost four million people living on the island of Bali, part of the conglomeration of islands making up Indonesia. Indonesian is the official language of Bali, but most people are bilingual, also speaking Balinese or English. Monica and I had no trouble getting around, as most people spoke English, at least in the tourist areas.

Mon and I ate many fruits that we'd never tried before: Mangosteen, soursop, snake fruit, jack fruit, and durian (in order of my personal preference). It was all very exotic and fun. To put things in perspective, I bet a lot of Balinese would think many of our common fruits are exotic and fun: Pear, blueberries, cherries, etc.

Another first for Monica and I: Bribing a cop. This is just the corrupt nature of Bali ... cops regularly take bribes, both from locals and tourists. Thankfully, S&J had told us about this custom before we got pulled over. Otherwise, we might have been tricked into handing over ALL of our cash. The first time we were pulled over the cop asked us for an international driver's license. We didn't have one, (though if I had thought about it before I left the U.S. I would have stopped by AAA to apply for one). We paid him off with 110,000 rupiahs (about $11 USD). The second time, we pulled into the exit of a parking lot and Monica paid the cop off with only 20,000 rupiahs. Good girl!

We learned that the Balinese do not tend to get angry (ever? or just in public? I don't know). But they think it's humorous when tourists get upset about things. They just smile and laugh. I like this.

Monica and I took it easy and really balled it up in Bali. Things are cheap and we really enjoyed the excellent service we received, unlike in most parts of South America. Some hotels let you pay a daily rate to use their pool, so we did that a couple times with a hotel nearby S&J's.


One day Monica and I went to a touristy beach. The water looked beautiful from afar, but once you got closer you realized it was full of trash. I rented a surfboard, finally caught a wave, looked down at the tip of my board and laughed out loud--a big hunk of plastic was riding the wave with me.


We made it to our destination--the temple on the beach (Tanah Lot). 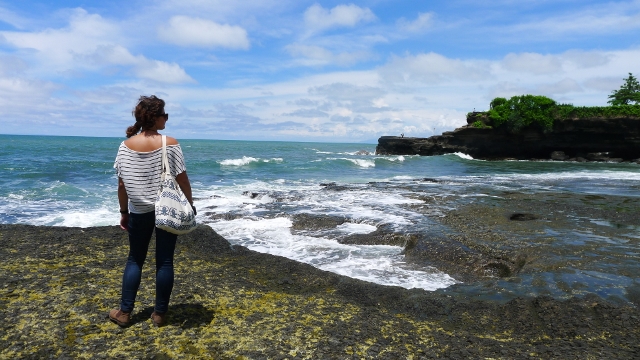 To go in, we were forced to be blessed with holy water, put a flower behind our ear and some rice on our forehead (and of course make a donation). We walk around the side and it's closed! It was all just a scam ... it's always closed. We soon learned this is just the way Bali is and you have to accept it. It kind of reminds me of the movie Labyrinth when Jennifer Connely's character is finally convinced she's chosen the right door after so much ado, but really she's been duped and gets sent down the hole with the nonsensical talking hands. 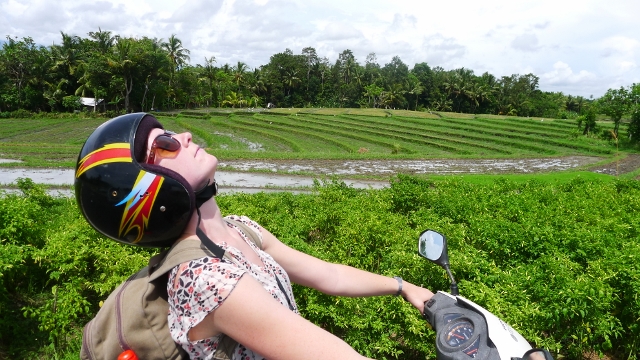 Once the weekend hit, the four of us went off to a nice beach called Candi Dasa for some snorkeling and lounging.

You're about to see the funniest s*&t on earth. While stopped at a traffic light/jam in our car, we were approached by a salesperson. He was not selling useful items like water, snacks, or even a souvenir. He was selling gorilla masks. Funny thing is, Jesse told us this was quite common ...


S&J took us to their friend Charlie's chocolate (and soap) factory. 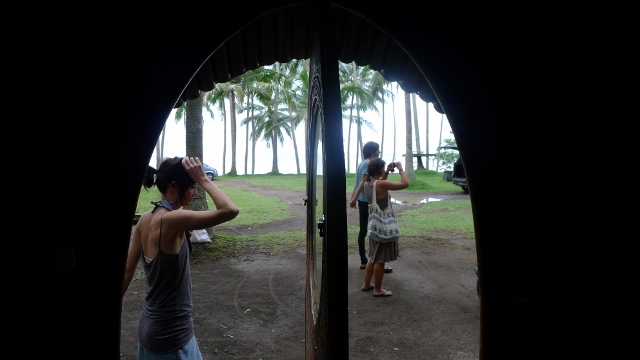 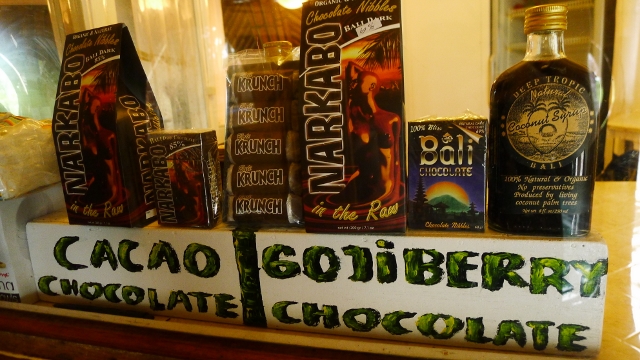 S&J then took us to probably my favorite place in Bali ... well, besides the waterfall. It was a water palace, called Tirta Gangga ("water river"). We swam in refreshing, clean fresh water in a pool literally built for a king. 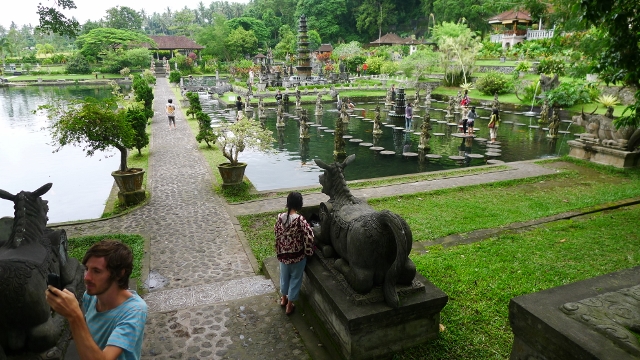 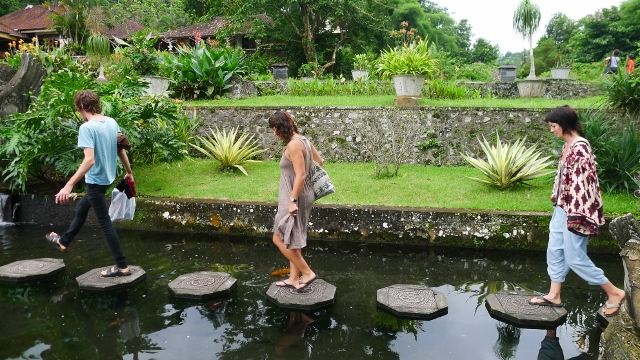 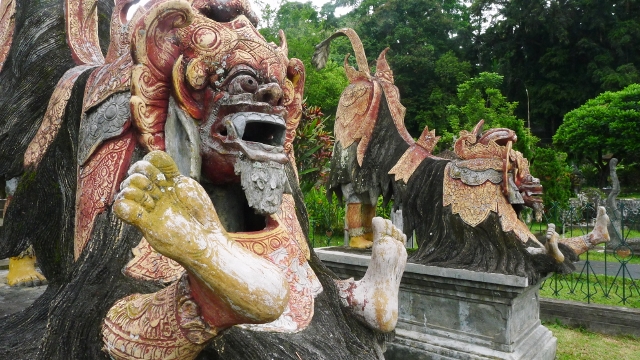 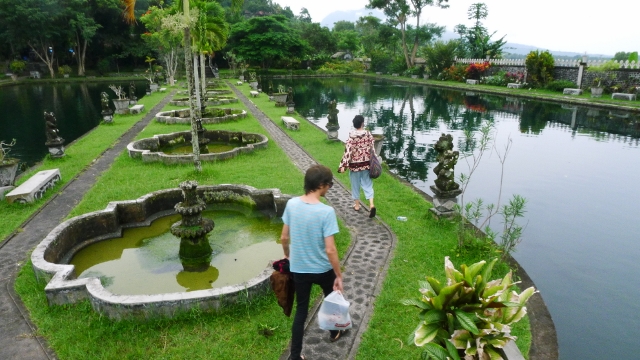 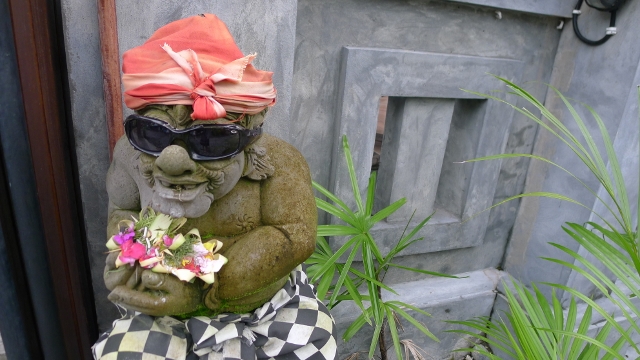 We then went to another "tourist object"--another king's palace nearby. Not nearly as impressive. In hindsight, we probably should have started with this one and ended at Tirta Gangga. 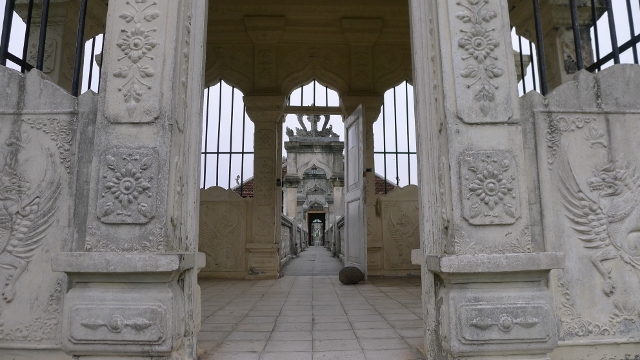 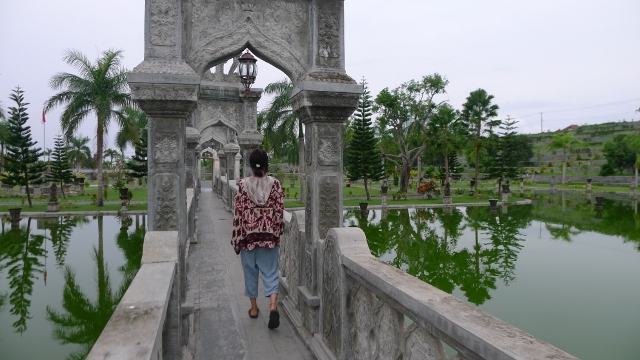 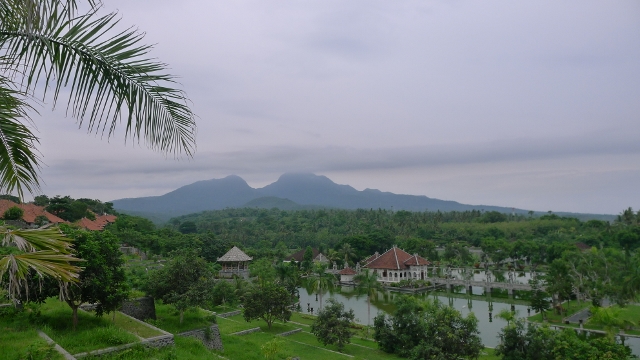 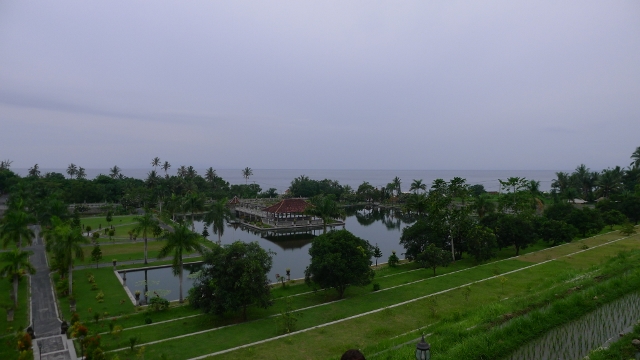 One day Sara took us to a fabric market, but her favorite store was closed.

S&J took us to our favorite restaurant in Bali: Sari Organik in Ubud.

After eating a delicious lunch together, S&J dropped us off at our hotel in Ubud, where we spent the next few days on our own. Ubud is a hippie town, most well-known these days from the book/movie "Eat, Pray, Love." The author, Elizabeth Gilbert, spends four transformative months in Ubud doing yoga and getting massages, both of which we tried. The massages were excellent and the yoga was mediocre. It was not my favorite type of yoga. It was a lot of chanting "om" and our (American) instructor was tatted up and talked about lattes--too cool for school.

One night I went to a traditional dance/music performance. There were about six different acts, and I enjoyed them all. It was female performer night, which was true except for one seemingly male dancer.


Bali is the home of Indonesia's small Hindu minority, the rest of the islands are primarily Muslim, and they are very devoted to their religion. Every day they put out offerings out for the gods, light incense and pray. Every house, storefront and temple is blessed. Many places even have a special spot for these offerings, kind of like a mailbox at the front of a house. They spend a significant amount of money purchasing the items for the offerings and the little handmade baskets they are put in.

When a Hindu baby is born in Bali, the family buries the placenta near the family's temple, thereby choosing where that person will have to pray for the rest of their life. In effect, this keeps Balinese people in Bali for life, since they must habitually pray at their chosen temple. Most of them have no desire to leave--they have a great sense of pride for their homeland. Think about it--they see people from around the world come to visit Bali. There must be something special about it.

S&J told us about a very significant holy day for the Balinese Hindus--Nyepi, the "day of silence." This spring day is a day of silence, meditation and fasting. It's the day that all of the evil spirits gather and pass over Bali. For this reason, everyone stays indoors to hide from the spirits, including non-Hindus and tourists in Bali; I mean everyone. The day before is a huge day of ceremony and celebration, attracting the attention of the evil spirits. Read more about this holiday here. I'm fascinated by it.

Monkeys! Monica and I went to a very touristy but fun place in Ubud called Monkey Forest Sanctuary. It's 20,000 rupiahs (about $2 USD) to enter, and you get to see loads of monkeys (macaques) in beautiful surroundings.

Monkeys like to steal things from tourists, anything shiny, any type of food, and also any water bottle. We were warned about all of these things when we entered, but I think the Japanese tourist who was holding this water bottle didn't understand the sign. The guy freaked out when the monkey approached him. After a long battle, the bottle was surrendered. The monkey proceeded to pour the water directly on his balls. I don't know if that was intentional or not. 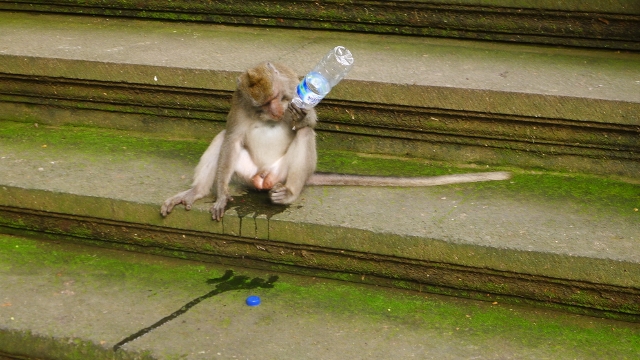 Feeding time for the monkeys is quite an event. One of the employees runs out pulling a basket filled with fruits and all the monkeys come scurrying out to grab as much as they can. They run off to a private spot, peel all of the fruits one by one, and stick them in their cheeks. Once this process is over, they take out the peeled fruits (one by one) and savor them. 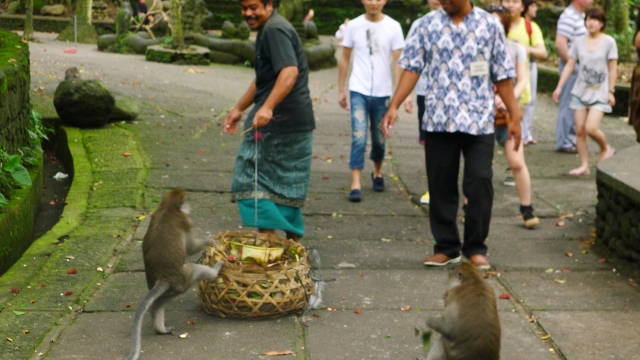 Monica and I rented a motorbike in Ubud and went up north toward Kintamani. It rained heavily all the way there and was quite windy. Trees and branches were toppling over into the street and it was pretty chaotic. We hung out in this guy's convenience store on the side of the road for a while to let the rain pass over a bit, but he told us it'd been raining for the past three days, so after a while we just continued along on our way.

We stopped at a temple, and both Monica and I were pretty unimpressed. Ruins : Peru = Temples : Bali (/Asia?) 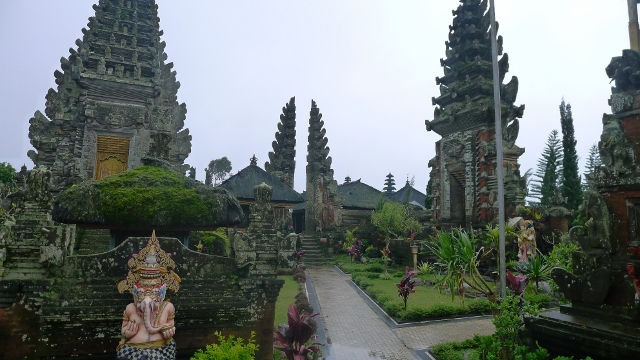 The most interesting thing about this temple to me was that a lot of the sculptures were made of cooled and solidified lava from the nearby volcano. 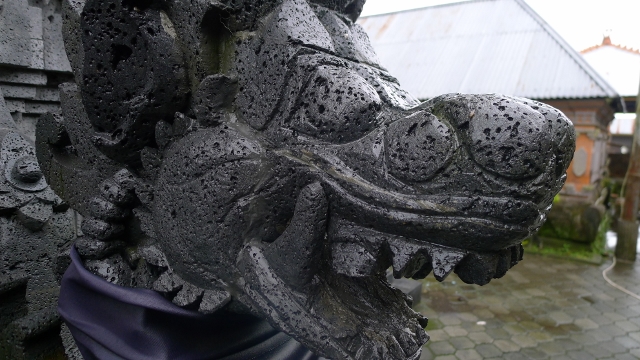 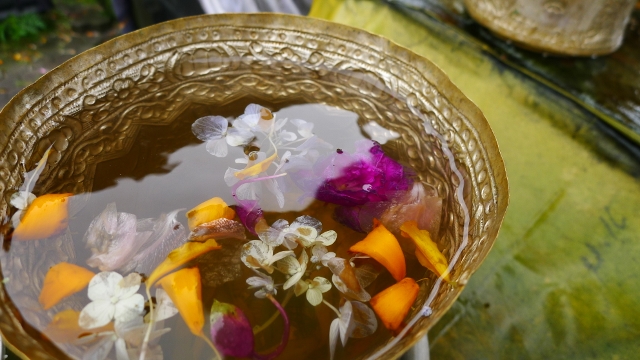 On to our next destination: Hot springs. 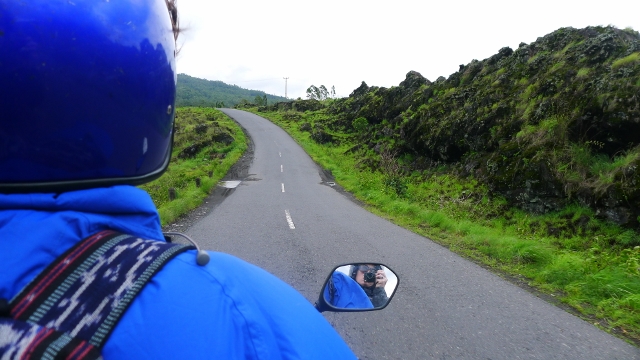 The hot springs were just okay. It was actually just a couple of stone hot tubs that were part of a hotel. It was expensive to get in, the water wasn't really that hot, and the lights and showers didn't work in the bathroom. Overall, kind of a disappointing experience. But fun to get to!

Monica and I decided to check out some of the fancy resorts surrounding Ubud. We went to the Four Seasons and it was breathtaking. After walking around the property, we ordered a drink at the bar. 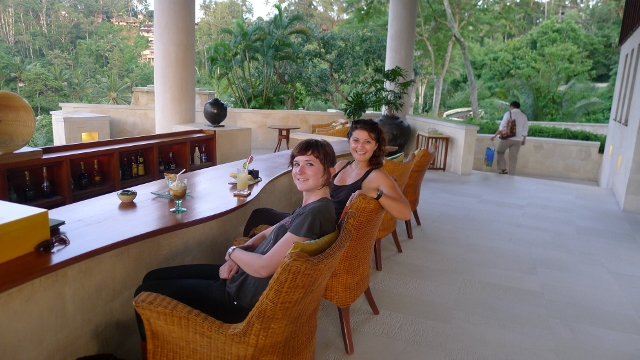 After four days by our lonesome in Ubud missing Sara and Jesse (they had to work during the week), we met up with them again and they took us on another adventure--this time to the Gitgit Waterfall. 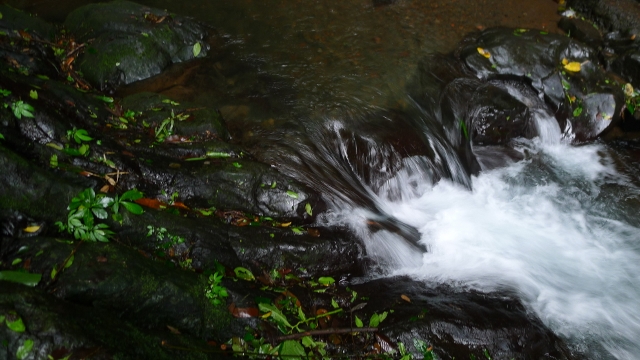 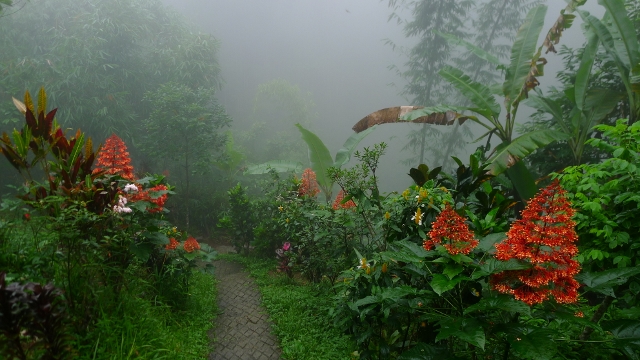 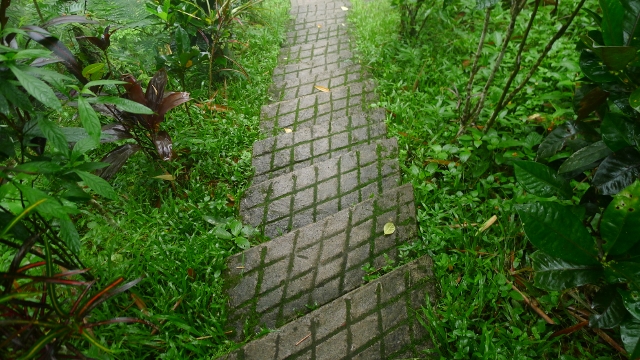 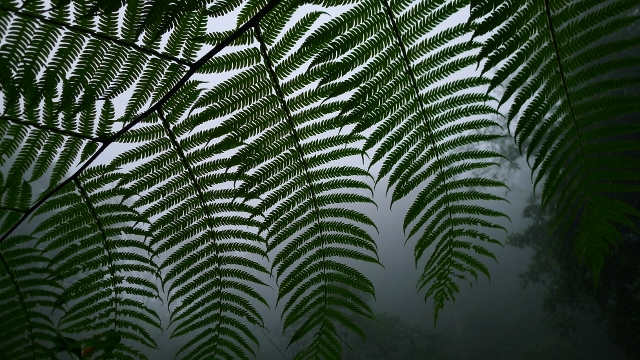 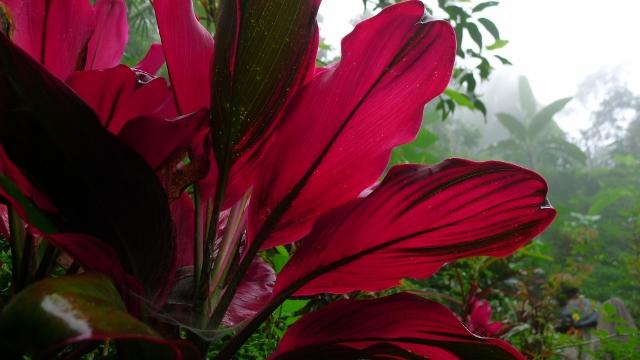 The drive back home to Canggu was incredible. The landscape was gorgeous and we wound our way through tiny villages and expansive rice paddies. 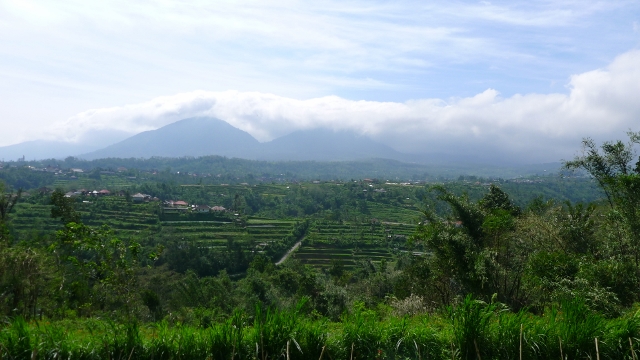 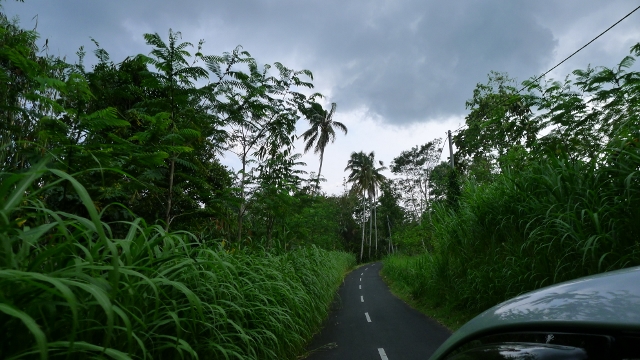 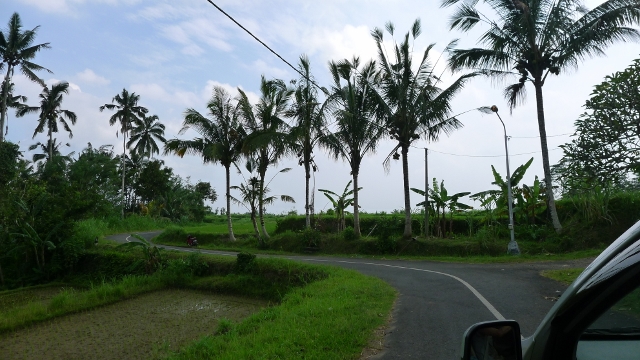 Jesse will be participating in an art show just outside of Ubud at the Gaia Gallery, so we stopped at the gallery on our way back to Canggu so he could set up his video projectors. The space is well-designed; it includes an art gallery, villas for guests and even a gelato shop. Yes, we did get some gelato.

Back at home, we had a lazy night in, our last night in Bali. It was pretty sad as this was my favorite part of our trip, and I'll miss S&J. But we'll meet up again back in SF. We exchanged some music and movies from our external hard drives, as well as a few books to keep us entertained on future bus and train rides through Asia.


Thank you, Jesse and Sara, for sharing your home and hearts with us. I'll always have wonderful memories of our time in Bali.