What we ate in Bolivia

Food in Bolivia is not much different from food in Peru, sporting the same staples: potatoes, corn, bread, deep fried everything. I was hoping this trip would help me lose weight, by being active and outdoors all the time, but given that I've eaten the weight of a whale in french fries and fried chicken, fish, etc. I'm starting to lose faith in the concept of "travel fitness." Traveler's diet is one of carbs, deep fried stuff and more carbs - at least in South America.

Lots of good veggies don't grow at higher altitudes or they're not very popular I guess. Walking around markets you always see half rotten, semi-dried up, overripe or extremely blemished veggies. Tried to make some pasta the other day and had a hard time finding 2 bell peppers that were not scorched up and a bit rotten, tomatoes in the same pathetic shape. The only things that seem to keep well are onions and garlic. If you're a chef, or love crisp, fresh, crunchy vegetables, the markets here can be very disappointing in their offer. I should also add the lack of variety. The only veggies you can buy are: potatoes, tomatoes, onions, spicy peppers, giant squash sold by the slice, and that's it. Think about this next time you go to your local produce market. You (we) are lucky bastards.

Another reason why we've been eating so many carbs is that meat is often unsafe here. Having to choose between a boring safe meal and risking explosive diarrhea, we often go with the safe meal. We do eat meat, but only from places that seem to have some sort of idea of sanitary conditions. The meat in markets is hanging out in the doorstep, never refrigerated, sometimes a dog or a cat chills out right next to a slab of meat, flies sit on it freely, people walk by and touch it, cars drive by and cover it in their smog. Not to mention the stench of meat sitting outside for hours. Seeing this with our own eyes, we are very cautious what we eat and never eat meat sandwiches from street vendors. So far, we've been really lucky and never got sick.

In the photo below, I made pasta with tomato sauce and sauteed vegetables and we ate it on our own private patio at the hostel Las Olas in Copacabana. Paired with a cold Bolivian brew, some soft music from Anne's laptop and this magic sunset, our quaint dinner was a success, despite the over-boiled pasta. 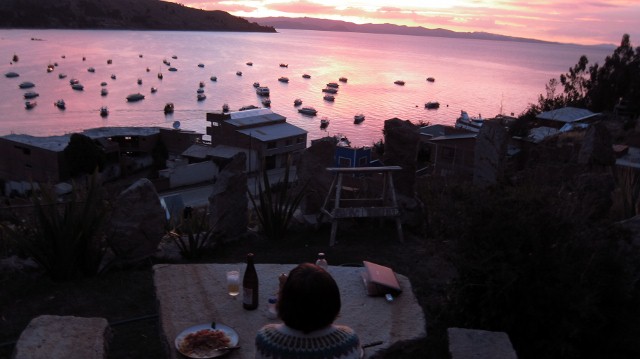 Below: Panetone ladies in La Paz. Since it's almost Christmas time, Panetone is all the rage both in Bolivia and Peru. Millions of different types of Panetone are being sold all over the streets of La Paz. 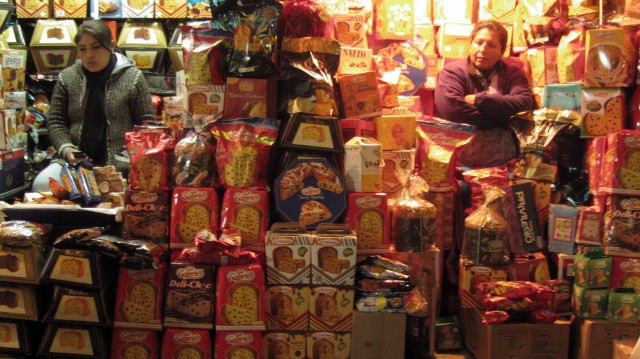 The streets of La Paz are like a big supermarket. People set up shop in the middle of the street, literally. You can buy anything you want. We even saw a guy with a megaphone, yelling out loud that he's selling 2 string panties for the price of one. It also seems that each street specializes in selling a specific type of product. On one street there's fruit, on another street you can buy meat and fish, on yet another one there are colorful chola skirts for sale, then you move on to the street selling snacks, like the ones pictured below. The small baggies cost 1 Boliviano (there are 7 Bolivianos for 1 USD) or you can buy "wholesale." My favorite snacks were the dried/fried (?) banana slices and the salty roasted Lima beans. YUM! 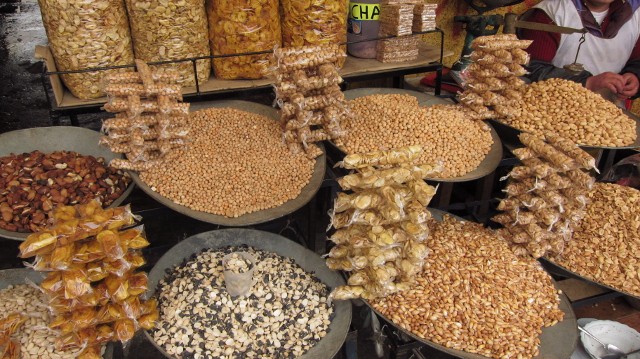 In the image below you can see a variety of dried spicy peppers. The food you can buy here publicly is not very spicy, but I've heard of a lot of traditional dishes they only make at home and never sell in restaurants. I wish I could try some of those, but unfortunately we didn't have the opportunity. 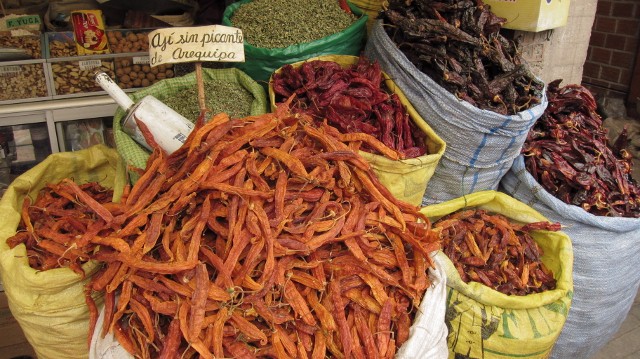 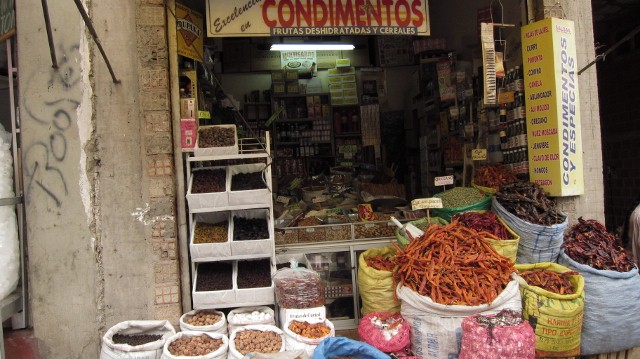 Luna Llena (full moon) - vegetarian dish at the hostel Sol y Luna in Coroico. Coroico is a small village in the jungle about 3.5h north of La Paz. We stayed there for 3 days at a lodge perched up at the top of the mountain. The lodge was about 30 minutes walk up the hill from the village, and since it rained most of the time, we were forced to eat at the lodge restaurant most of the time. The food was good, portions were generous and prices quite cheap. The dish below cost about $5. It consists of a bed of rice, topped with sauteed vegetables, deep friend plantains, slices of papaya and a hard boiled egg. DELISH! 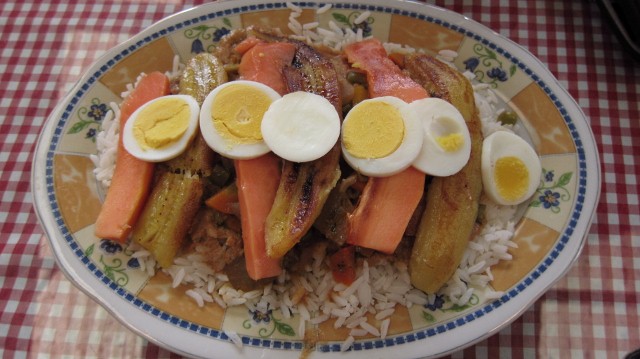 Here we are with our awesome friends Kathrine and Elizabeth from Kansas City, whom we met at the hostel in La Paz and later hung out with for a few days in Coroico at the Sol y Luna hostel. We all ordered the Luna Llena. 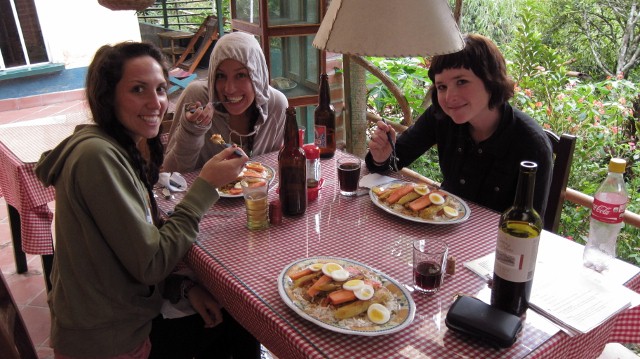 blah Bolivian wine is not well known, but it's quite flavorful and enjoyable. I am actually drinking a glass of it as I type this. It boasts itself as "vino de altura" (altitude wine), because the grapes grow at almost 2,000 meters. Supposedly, it's the "highest" wine in the world. 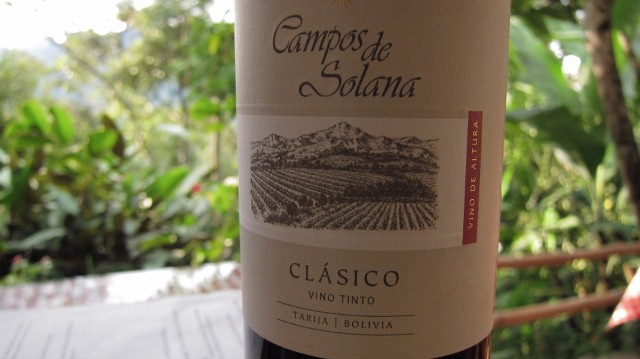 Deep fried chicken and rice at 8am on the side of the road at almost 4,000 meters! This is the morning when we rode bicycles on the "World's Most Dangerous Road." We weren't really hungry, but the van stopped for snacks in a area where a dozen women were selling deep fried chicken on the side of the road. The smell of hot fried meat was irresistible, so we decided to buy some. This picture shows the lady as she was preparing us a plastic bag filled with cooked white rice and 2 pieces of chicken on top. 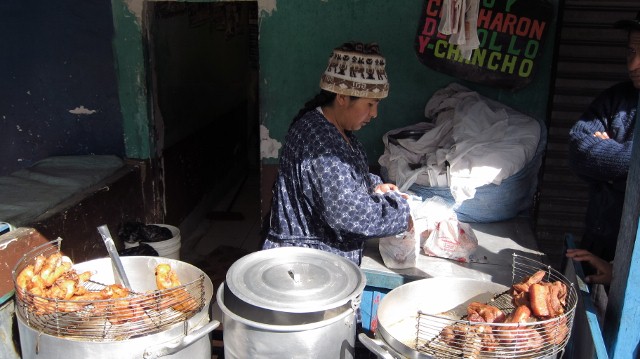 I don't remember what this thing was called, but it was quite delicious. It was potatoes, filled with either a sweet meat mix, or veggies, or rice, or some other stuff, then deep fried. Bought it on the street for 3 Bolivianos. 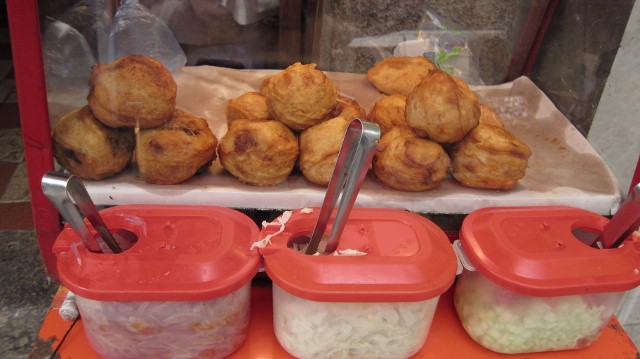 Breakfast at La Cupula in Copacabana. For 28 Bolivianos (~4 USD) you'd get a coffee, a fresh squeezed juice, home-made bread, omelet, butter, marmalade and a bowl of muesli with fresh fruit. We ate this thing every day we stayed there. Best bang for our bucks, hands down. 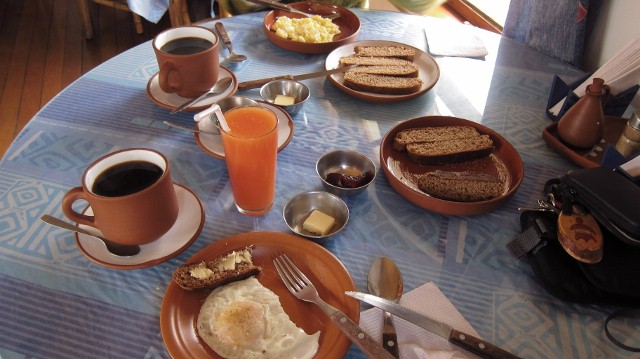 To get from Copacabana to mainland Bolivia, you have to take a bus, then get off the bus, get on a shitty little wooden boat with everyone else on the bus while your bus and luggage gets on a tiny wooden "ferry" and cross a body of water that is part of lake Titicaca. Since the human boat makes it on the other side before the wooden ferry carrying the bus, all you have to do is wait around or eat deep fried little fish sold by women in the market. Again, I don't know the name of these fish in English, but they were crunchy, salty and delicious. 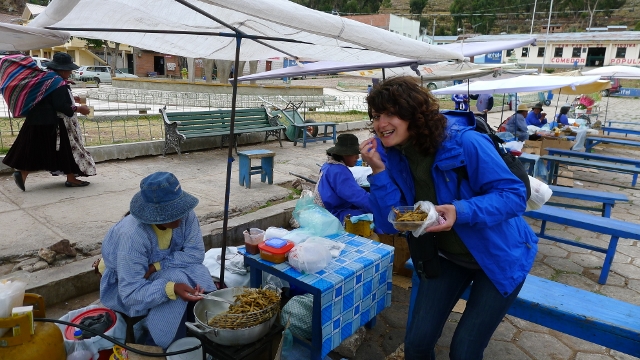 Ate the whole basket and was in heaven. Did I mention that I love fried fish? 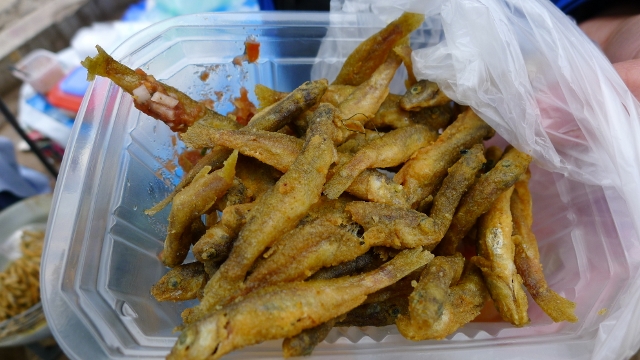 Tons and tons of bananas on the streets of Coroico. I never knew bananas grow in such big bunches and they are actually quite heavy to lift. 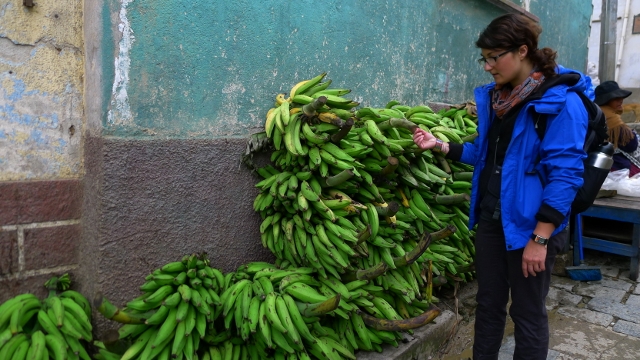 Believe it or not, lots of Germans emigrated to Bolivia and it's been quite a great surprise for us to find a German bakery in the middle of the Bolivian jungle, selling rich German pastries and cakes, spezle, Braten, Christmas Stollen and other yummy things. I'm having a slice of butter cake with marzipan filling and Anne is having chocolate cake with almonds. We were in heaven, but the reality is we couldn't finish those massive slices of sugary goodness. 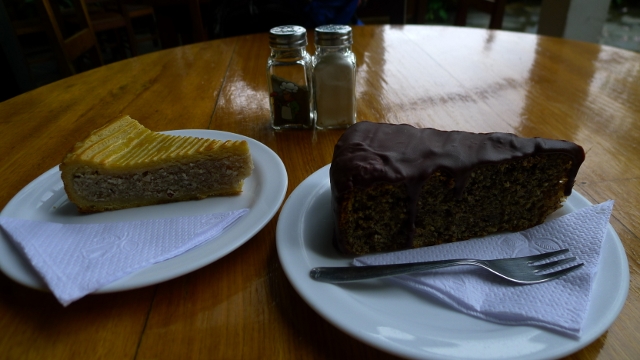 This lady was selling all sorts of nuts (walnuts, Brazil nuts, peanuts, etc.) covered in this thick soft white layer of sugar. She kindly offered one piece for us to try. We did, and there was SO MUCH SUGAR that I had to spit out the white portion. Anne spit hers too. We were obviously not gonna buy that crazy sugar overload (Peruvians and Bolivians seem obsessed with over-sweetening their beverages and food) so then the lady started yelling at us that we shouldn't have bothered her if we weren't going to buy anything. 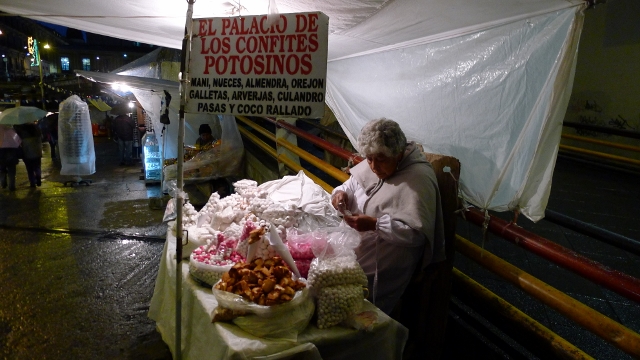