I'm writing now from our room at the Hotel Keoken in Punta Arenas, Chile. We had an amazing week in Buenos Aires before this. It felt like a vacation to us, coming from the insanity of La Paz. Buenos Aires is very similar to the big cities of the U.S., but with a Latin twist. For example, dining at restaurants in Buenos Aires is pretty much the same as the U.S., but instead of eating dinner between the hours of 7:00 to 9:00, Argentinians eat around midnight.

It didn't take us long to adjust to this new schedule and feel at home in BA. The subway (subte) reminded me a lot of the subway (the "T") in Boston. It was even color-coded, just like the T.

The traffic definitely felt South American, but it wasn't as chaotic or quite as fast as in Peru and Bolivia. The biggest difference from traffic in the U.S. is pedestrians don't seem to have right of way. Drivers don't yield to you when you're walking through a crosswalk, so you constantly have to be aware of your surroundings and watch for turning vehicles. Also, I'm not sure if Argentina has a helmet law or not, but we saw many motorcyclists doing something really strange: wearing a helmet halfway on. It's hard to describe and I can't believe I didn't get a photo of this, but I just did a quick search for "Buenos Aires motorcycle helmet" and I found a photo of what I'm talking about. I mean, just wear it or don't bother. If anything, wearing a helmet this way is distracting and will cause more accidents and injuries than not wearing it at all. Maybe there is a helmet law and this is a way of qualifying for wearing a helmet? Or maybe there is no helmet law and this is just a trend, a way to look cool. Who knows...

It was our first real taste of hot weather, and we were loving it. The temperature was in the 90's for a couple days and people had their air conditioners on full blast. I will always remember walking down the city streets and getting dripped on by water coming from the air conditioners in the apartments above my head. A fond memory of Buenos Aires.

Backing up for a minute, let me talk briefly about the trip from La Paz to Buenos Aires. We went from La Paz to Lima (with a five-hour layover) to Buenos Aires, on a red-eye flight. If you look at a map, you can see that Lima is actually out of the way, but it was the best we could do. I forgot that I had my mini Swiss Army knife (that my parents just bought me in France) with me in my carry-on bag, and they confiscated it in the La Paz airport. I also lost my extra digital camera I had with me ... well, someone took it out of a hidden zipper pocket in the luggage that I checked. Fortunately, all of the other zipper pockets were locked up, so nothing else went missing. It was an old digital camera that I don't really need right now, so I wasn't that bummed about losing it. The only annoying thing was that there was an 8-gig memory card in it, but luckily there weren't any photos on it. I guess it was a reality check for us. When you start to drop your guard a bit and get comfortable is when bad things can start happening, so it was a reminder that we do need to take those extra precautionary steps along the way so that something more important doesn't go missing.


My friend Daniel from college ended up buying a last-minute flight and meeting us in BA because he had some vacation time he needed to use before the year-end, so the three of us ended up renting a sweet apartment for the week through the website Airbnb.com. It had a full kitchen, living room with dining area, cable TV, WiFi, bathroom and three twin beds--perfect. And it was in an old building with cool elevators that had those non-automatic sliding doors.

The scariest thing about the apartment: the dude in the photo below. It's a cardboard cut-out security guard, but coming home alone at night and not expecting a fake guard was terrifying. I used the flash in this photo, but it was quite dark in the hallway. I tried talking to this guy as I approached but he wouldn't respond or move an inch. I didn't know what was going on ...


While enjoying my first meal out in BA, I noticed a bunch of smoke rising from the street. At first, I thought it was just a lot of car exhaust--a pretty usual sight in La Paz--but then I saw the bright orange flames coming from a car! Within minutes, there were police cars, fire trucks and an ambulance at the scene. A crowd of people gathered to watch the inferno.


We went out to a bar the first night, but didn't order any drinks because we were too exhausted from our flights. The nightlife is crazy in BA--the bars serve alcohol until 5:00 a.m. and stay open until 6:30 or 7:00 in the morning. I definitely don't want to bar-tend there.


Every day, we picked a new neighborhood to explore. We went to Palermo on the second day to check out some of the shops we'd read about.

We went to San Telmo on the big weekend shopping day. One street in the neighborhood fills up with vendors selling all sorts of items for several blocks. We only walked down a fraction of the street and it somehow took us almost an entire day.


After shopping in San Telmo, we quickly made our way over to the most touristy street in BA: El Caminito, in the cute neighborhood of La Boca. People kept telling us not to even bother going there, but I'm glad we did. The houses were all very bright and colorful, and we encountered some great bossa nova musicians along the way. 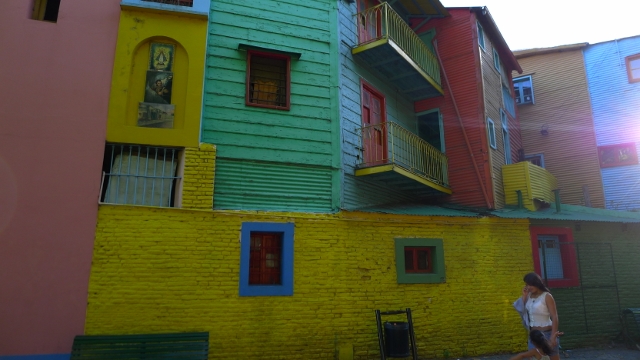 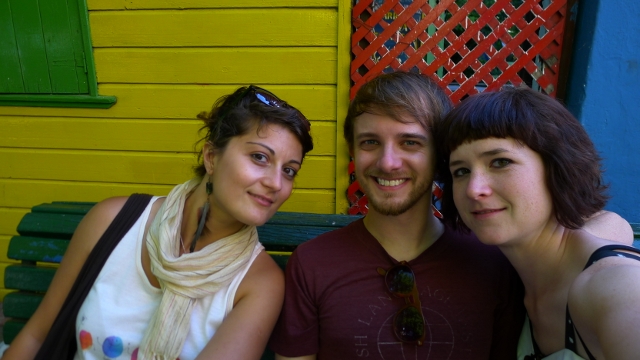 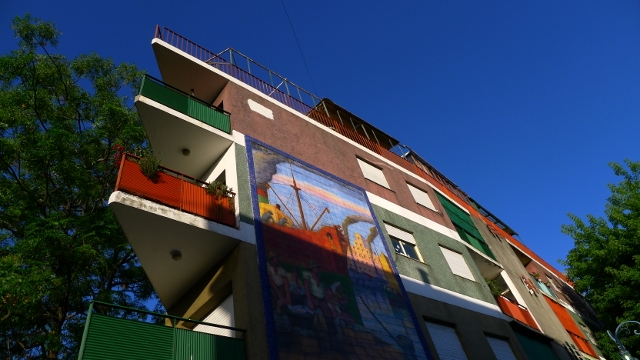 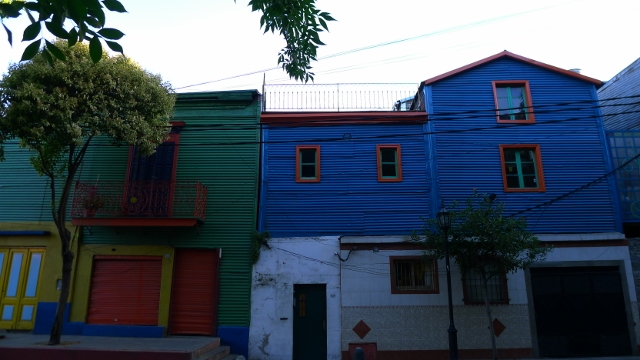 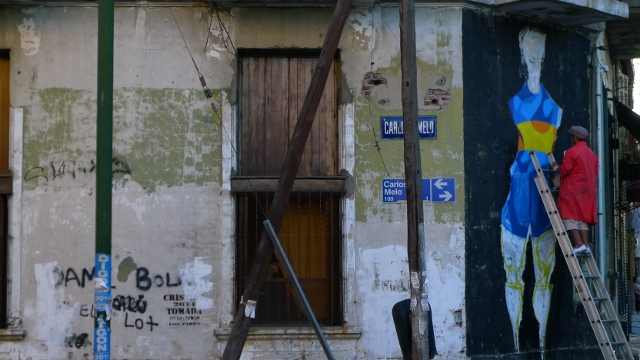 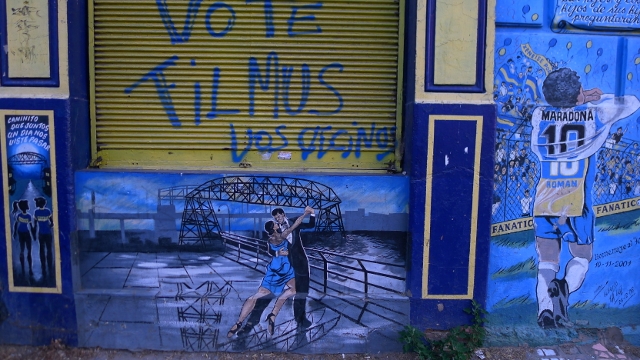 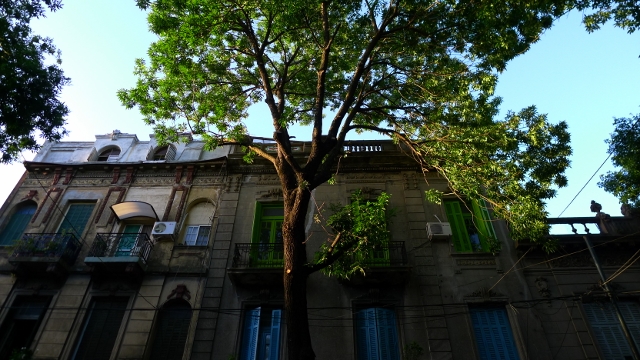 One day, we had to spend a couple hours at the U.S. Embassy because I needed more blank pages in my passport. They raped me with an $82 USD fee for the few pieces of paper. I must admit they are pretty cool though ... I don't think they could get any more American. Each page has a different graphic: a black bear with a fish in its mouth, a totem pole, American bison, Statue of Liberty, cowboys herding cattle, wheat, and--of course--a bald eagle.

Later that day, we checked out a fancy mall, a theatre-turned-bookstore, the famous Recoleta Cemetery, caught a live performance of a 12-piece drumming group and had a steak dinner. 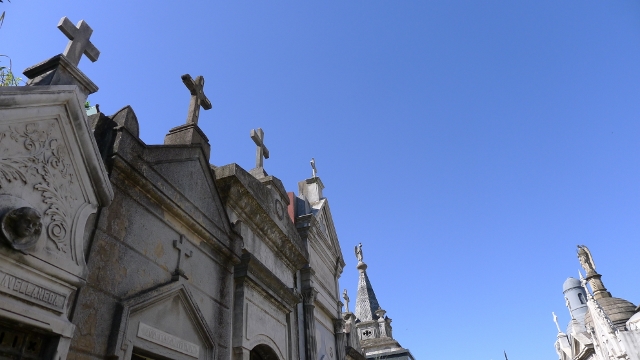 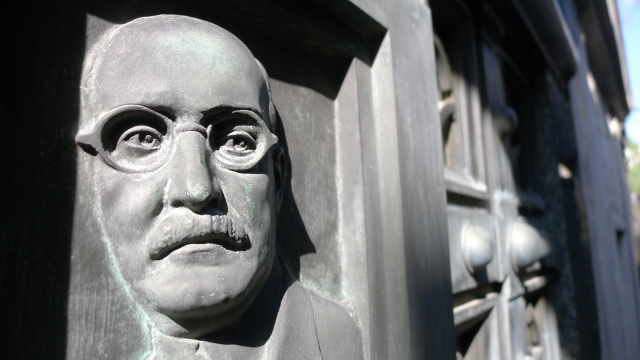 The most frightening thing in the cemetery was not baby coffins, cobwebs or rancid wafting smells. It was the cat below! I whole-heartedly thought this was a joke--someone playing a stupid trick on the people in the cemetery by setting up a taxidermied cat. Either that or I was seeing a ghost. But no--it was alive! One eye was glued shut and the other was half open. It was stiff as a board and frozen in an odd position. Little did we know it was about to drop a deuce right in the middle of that missing tile. What a sight ... 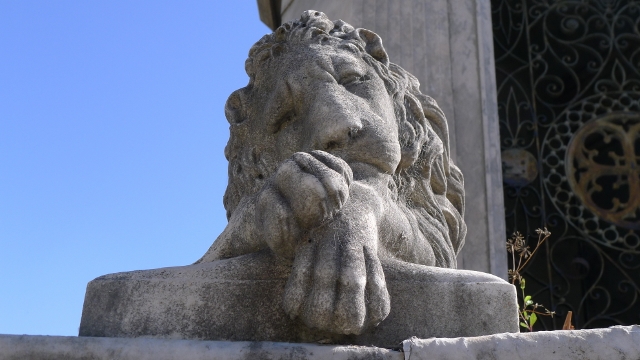 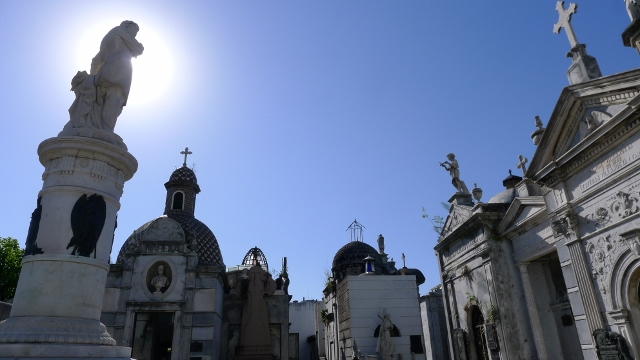 We briefly stopped by a low-income neighborhood right outside the major city bus terminal. 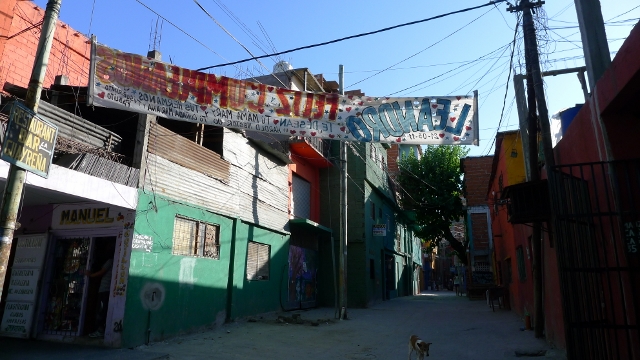 And then went to the show we read about on WhatsUpBuenosAires.com.

We happened to walk down Avenida de Mayo during the 10-year anniversary of the (December 2001) uprising in Argentina. The street looked totally different from how we remembered it a couple days prior. Now there was graffiti all over the walls of the buildings, news reporters and camera personnel shooting footage of the street, almost all of the restaurants and cafes were closed, and there was no through-traffic so people were walking in the middle of the street.


Daniel and I took a brief stroll in the neighborhood one day while Monica stayed inside to catch up on some important Internet errands. We did a little shopping on Florida street and then checked out the Police Museum, one of the craziest museums I've ever seen.


One last photo because I seem to be obsessed with the "trash culture" in all of these countries I'm visiting. In BA, it seems to be trash night every single night, though I can't say for sure. They don't seem to use dumpsters or trash cans, so the bags just get dumped onto the sidewalk and/or street. Then, late at night, people go through it before the trucks arrive to pick it up. Hot items seem to be recyclable bottles and also certain papers. We theorized that people are seeking personal information for identity theft, but who knows. They surely make a huge mess of it all.


It's late now, though the sun set not too long ago, around 10:30 p.m. The temperature's in the 40's and Monica and I have to layer all of the warm clothes we brought when we go outside. I'm glad I have that alpaca sweater I got in Peru ...
by anne