It’s Tuesday, November 29, 8:25pm and I’m lying in my tent, inside my sleeping bag, wearing my headlamp on my head and writing this as it pours outside. There are thunders and lightnights every ten minutes or so. Tonight we are sleeping in the Pacamayo valley, situated at 3600m altitude in the Andes. It’s really cold in the tent, and I’m wearing all my clothes on top of each other, inside the sleeping bag. 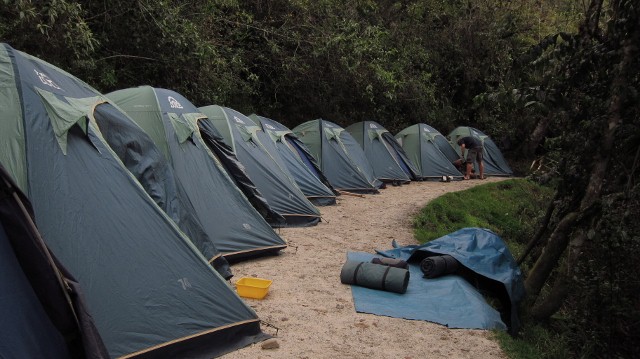 Today we climbed 12 kilometers, gaining 1200 meters in elevation from the previous night, to the highest pass of the trail at 4200 meters. Then we descended to 3600 meters, where we are camping now. It was the hardest day of the hike and by all means one of the most strenuous things I’ve ever done in my life so far.
How the Inca Trail Hike Works
The Inca Trail is a 43km hike over the course of 4 days that ends at Machu Picchu. I would call it a difficult hike, unless you’re in excellent physical condition. There is an option to hire porters to carry your personal belongings, but Anne and I (and most of the people in our group) carried our own gear, which made it a bit harder. The hike is particularly difficult due to the long and steep uphill sections (hours upon hours of climbing thousands of rock steps) and the lack of oxygen in the air at this high elevation. That aside, it’s totally worth it, especially if you’re into backpacking and outdoorsy stuff.

This hike is now heavily regulated by the Peruvian government, it can only be done through a trekking agency and only by a maximum of ~200 hikers per day (not including porters). Because of that, spots fill up fast and you have to make your reservation months in advance.

There are about 4 agencies that organize this trek and the cost is around 500USD. The fee includes trail permit, entrance fee for Machu Picchu, bus and train to get back to Cuzco, camping gear, food, guide and wages for all the porters that carry all this stuff. The company we chose is called Peru Treks, mostly because it was highly recommended by one of my coworkers and we also heard it pays porters a fair wage. And let me tell you, these guys have the hardest jobs ever. I’ll talk more about them later. 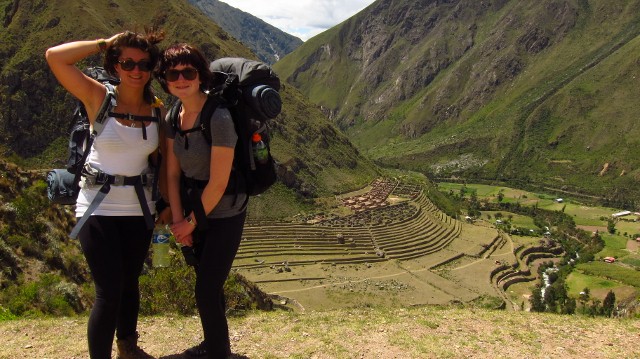 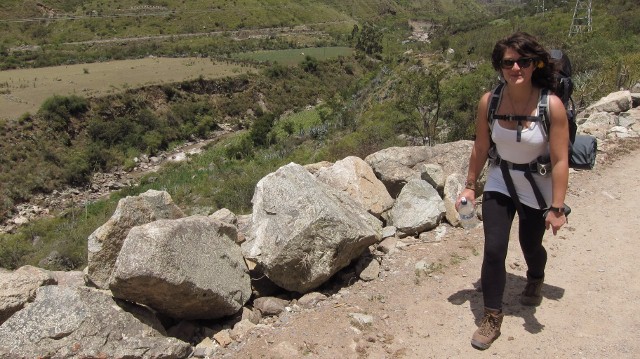 Stranded Paranoia
Last night something interesting happened that I’d like to talk about. In hindsight, it all seems so stupid now, but at the time it felt like my worst nightmare come true. After I finished writing down some trip thoughts, I lay down to sleep in our tent. Anne was already asleep next to me. I closed my eyes and realized I wasn’t tired at all, so I just lay there, focusing on my breath and waiting to fall asleep. I then noticed that I was having a hard time breathing (which is likely to happen at this altitude, especially at night time.) I felt as if I was starting to get a case of severe altitude sickness. Which didn’t make any sense, since we’d been in Cusco 4 nights before starting the trek, and had no problems with the altitude whatsoever. I then started panicking, feeling nauseous, out of breath, my heart was racing and it all got completely out of control. All this in the middle of the night, in a campsite, in the middle of the mountains in Peru, far away from any form of civilization, with everyone else in the surrounding tents already asleep. The whole thing turned into a full-blown panic attack, the second one in my life after over 4 years since the first one, when I ended up in the ER in San Francisco.

I shook Anne multiple times to wake her up, as I was afraid I would pass out. We went outside trying to find the tent where our guide was sleeping. We woke up the poor guy and got an oxygen tank from him.

Anne was a total champ, stayed up with me during this entire moment and encouraged me with positive and logical statements. We ended up chatting for over an hour about all sorts of things that took my mind away from worrisome thoughts, until I passed out. The next day I was totally fine and ready to continue the hike. Saul, our guide, also known with the nickname “Coca Man” came to check on me in the morning and when I told him my story, he said: “This place has a lot of energy. The Incas call it the Sacred Valley.” 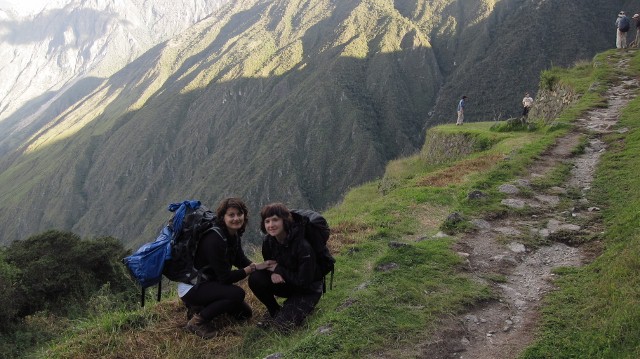 The Porters
The whole porter situation is bugging me a lot, so I’m dedicating a whole chapter to them, these unsung heroes of the Inca trail. The porters are poor, weathered men who carry really heavy loads (25kg) on their backs, wear rubber sandals made of old car tires, and look a lot older than their real age. They live in the villages nearby and are hired by the trekking companies to haul food, tents, cooking gear, gas tanks, etc. on their backs up the Inca trail. While trekkers go up on this trail with their fancy expensive hiking boots, Goretex gear and small backpacks, the porters fly past them with huge loads, often not properly or ergonomically strapped on their backs. They wear open toe sandals. Their feel and toenails are rugged. They never smile.

Today on the trail a porter approached me when there was nobody around (I assume they’re not allowed to hassle trekkers) and asked if I had a bit of chocolate. He said he was very hungry. We still had a long ways to go until campsite. I gave him two of my fancy, overpriced San Francisco energy bars and told him they’re not that tasty, but they’ll give him some extra energy. He thanked me several times and gulped them down in a hurry. After he took off, I almost cried.

The porters carry our tents, our food, dishes, gas to cook the food, tables and chairs for the big communal eating tent (which doubles as their sleeping tent.) While it’s nice to have a warm meal at the end of 8 hours of climbing, I HATE the fact that my comfort is obtained by these people exerting so much physical effort for so little money. I know it’s their job, and that my 1st world class tourist money makes it possible for them to earn a living, yet there is something about it that deeply bothers me.
by Monica S.