Tiger Kingdom and the Elephant Sanctuary

I can now truthfully say I've hung out with tigers and washed an elephant in a waterfall--two things I'd never done before, and will never forget. 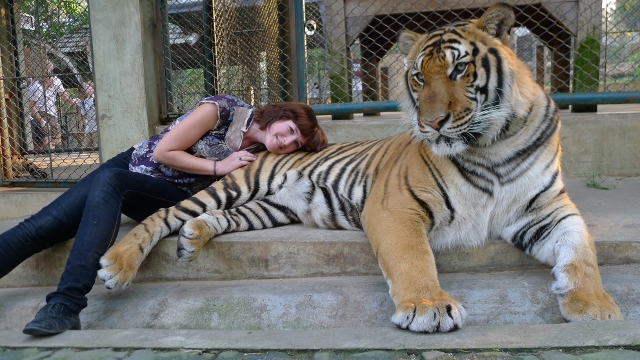 Tiger Kingdom (in Chiang Mai) was not part of our original plan for the day, but it came along at a nice time for a bathroom break while motorbiking.

I don't know if I've ever gone through so many emotions in such a short period of time. I was shocked, then terrified, then ecstatic, then more scared and then finally relieved.

Judging from our visit to the Kingdom, I would say the animals seem to be treated very well, are not sedated and are well-controlled. I'm sure everyone has a different opinion about this, but personally, I would recommend a trip here, as it's an opportunity of a lifetime. You must be willing to accept the risk of something terrible happening, so I wouldn't bring any children into the tiger cages under my care. I, on the other hand, am willing to spend the rest of my life with a bad-ass tiger attack scar across my face.

Monica decided to go in the medium-sized cat cage and I chose the full-grown two-year-old cats. I think Monica's experience was scarier than mine, since her young tigers were running around and playing with one another while my cats were just lying around, not moving much. 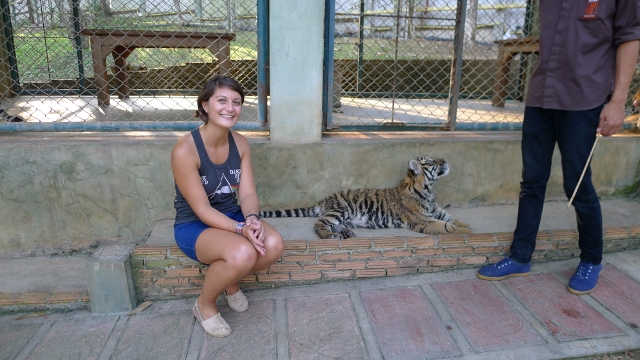 The young Thai trainer who led me into the cage and photographed me with the tiger really cracked me up. My heart was racing and my body was full of adrenalin as I asked him, "You're sure it's okay to go in there? ... Can they sense fear?" He didn't say a word. Rather he stared at me like David Blaine, grabbed my arm and dragged me into the cage.

He was quite the photographer, commanding me to do certain things for the best shots. I felt a bit like I was an animal being trained myself. A few of the many things coming out of his mouth:
"Head on the tiger."
"Lay down on the tiger."
"Sleep on the tiger. No smile. Relax! No smile."
"You tickle the tiger. Pet harder."

And perhaps the best:
"No worry. Just tiger." 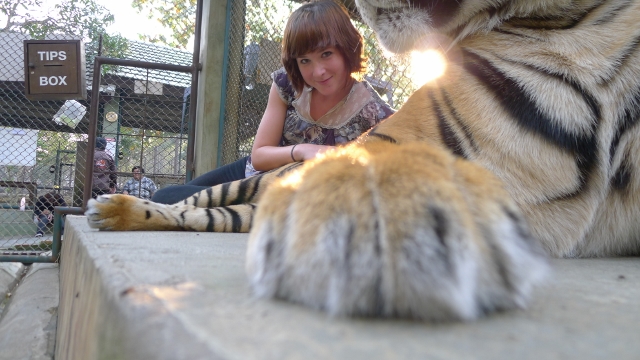 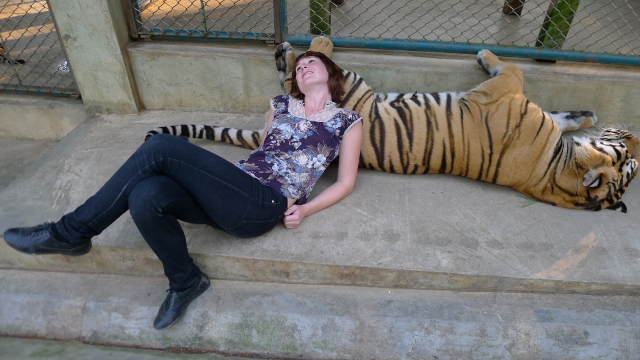 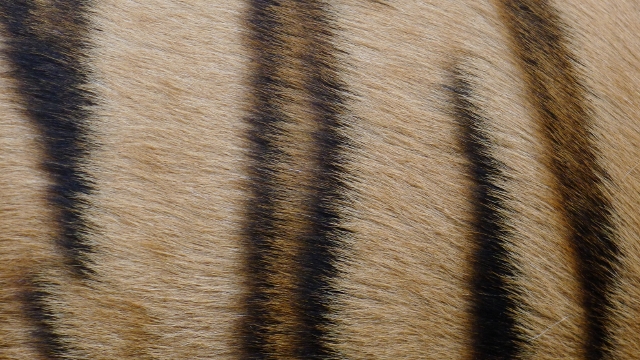 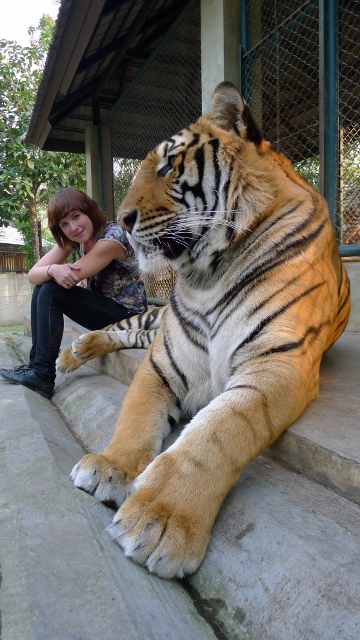 We spent a while after our one-on-ones with the tigers just watching them through the cages. The following two photo credits go to Monica, who used my camera because her battery died. I like them a lot. 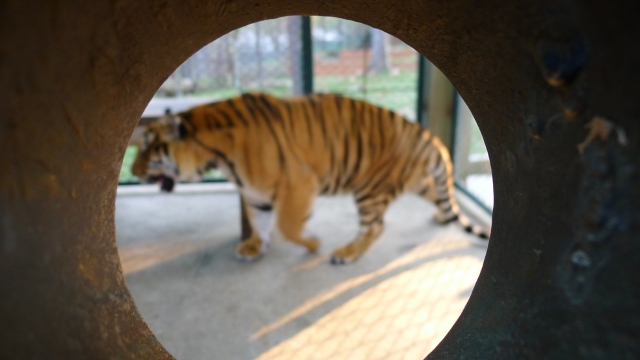 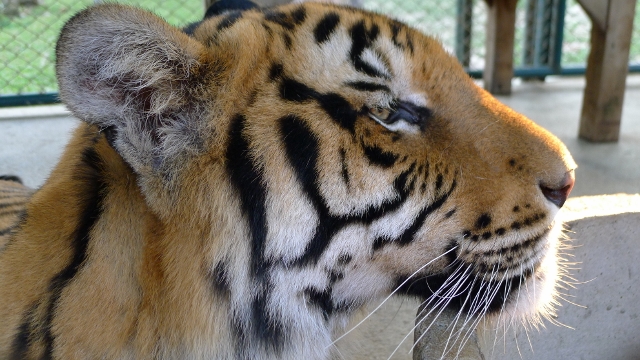 The trainers at the Kingdom were really some of the chillest guys of all time. Those little bamboo sticks were all the ammunition they had against the animals, should something go wrong. It's amazing that the same instrument used by orchestra conductors and fairies is the exact same instrument used to control tigers. 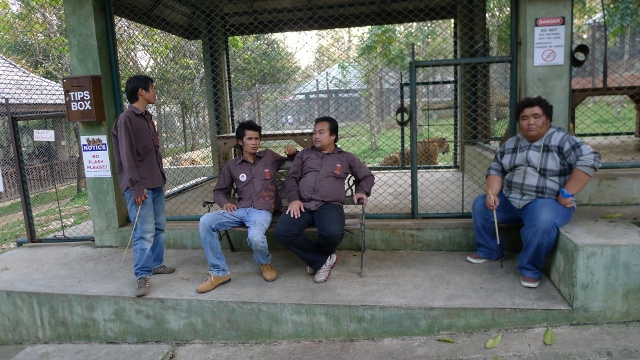 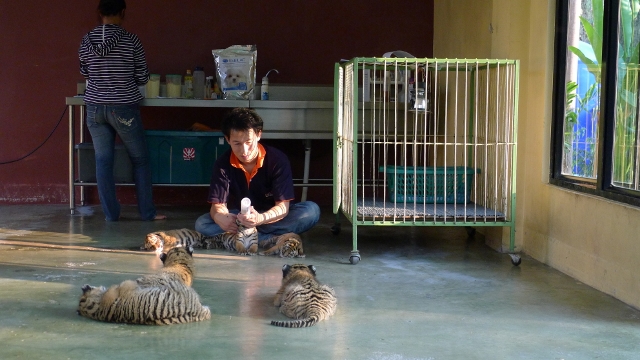 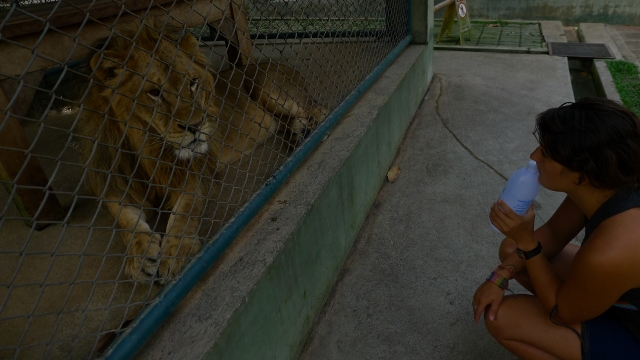 Our next animal adventure was a planned trip to the Ran Tong elephant sanctuary outside of town where we fed, rode and bathed elephants. Monica and I paid the lesser amount of money, which meant sharing one elephant between the two of us. However, they happened to have an extra elephant so they let us each have our own for the day at no extra cost.

Ran Tong treats their animals very well. In fact, when the tours end for the day, they let the elephants roam free around the expansive jungle property. The elephants decide to come back every morning at 9:00 a.m. for another day of visitors because they know there will be bananas waiting for them.

We got to the sanctuary from Chiang Mai in the back of a pick-up truck. It's really ingenious how people in Thailand add benches to the insides of trucks and structures overhead for sun protection and storage.

After a brief stop in a warehouse market to pick up some (a ton of) bananas for the elephants, we were on our way. 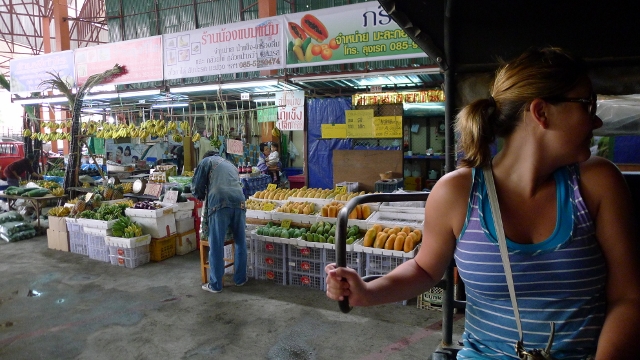 After stopping to pick up the elephant snacks, we stopped for some snacks of our own. The lady pictured below lives in Hawaii and she is quite a character. We shared affection for this little frozen pineapple pop. 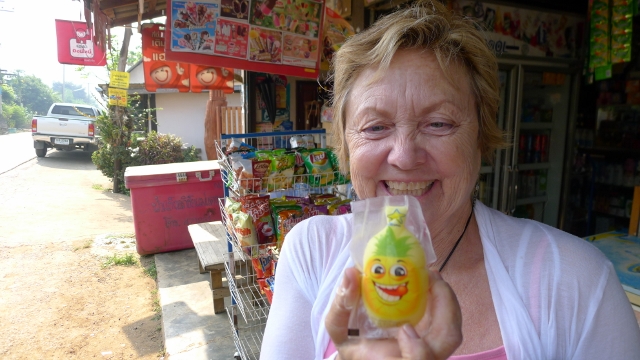 At first sight, we were a little intimidated by the elephants, but it didn't take long before they became our new pets. 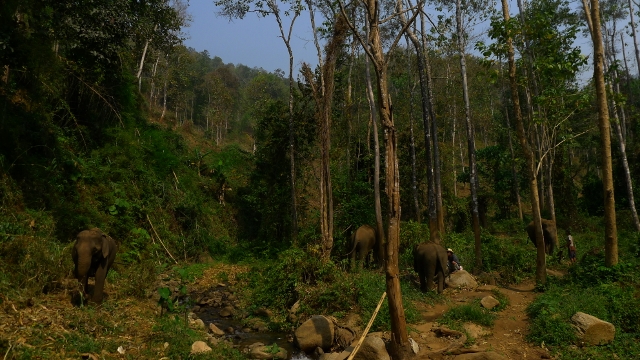 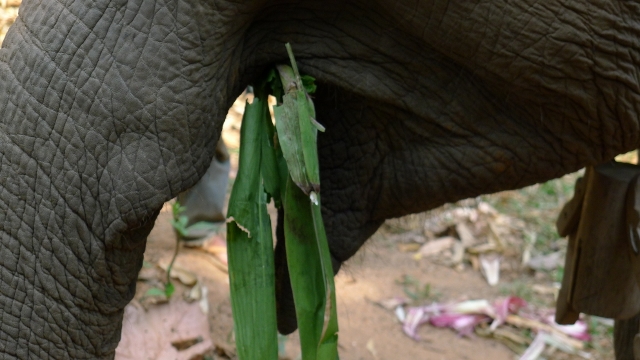 Elephant skin is about an inch thick. It's very dry and rough, with prickly, thick black hairs sticking out here and there. 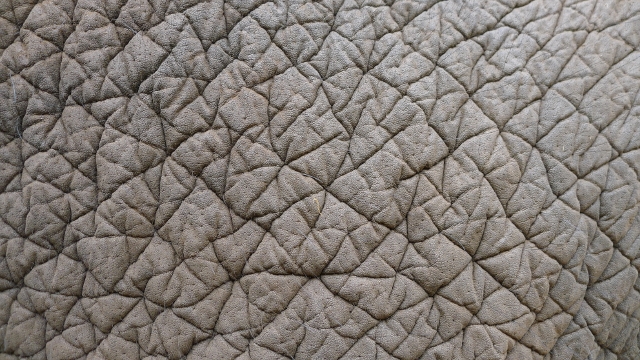 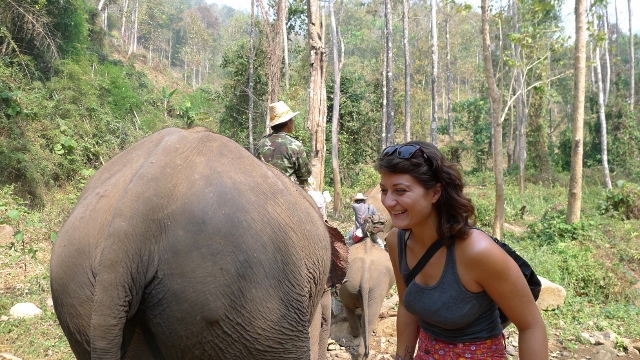 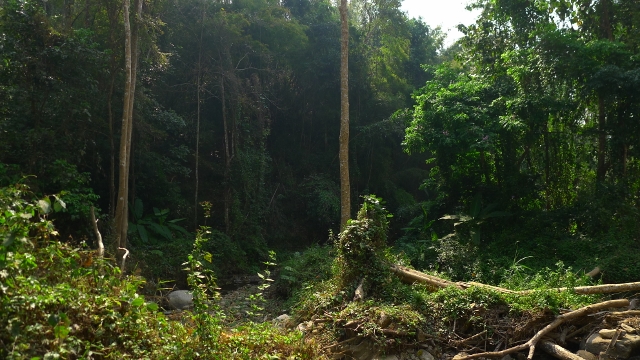 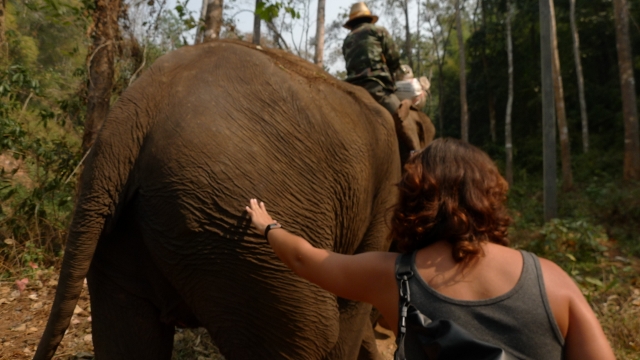 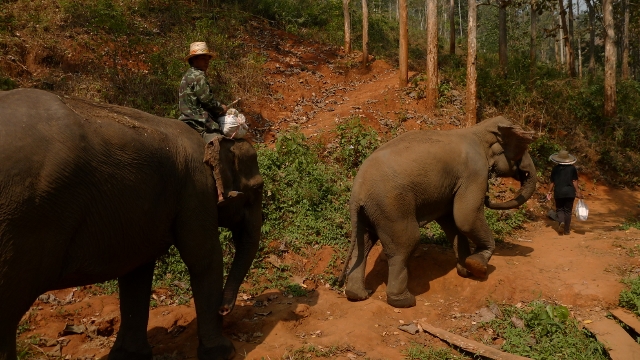 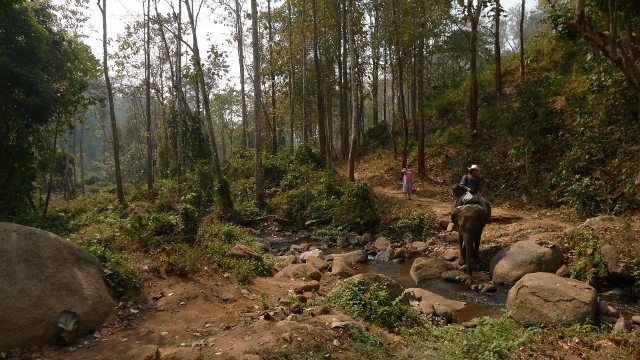 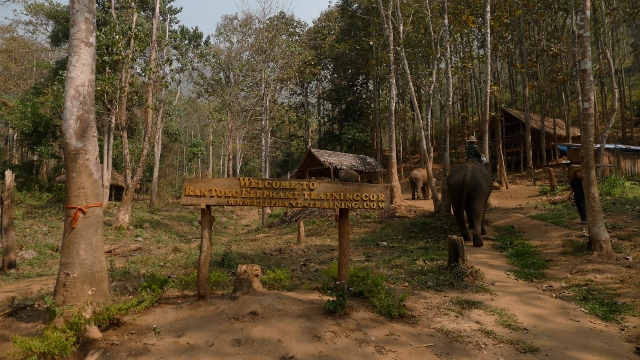 There happened to be a four-month-old baby elephant at the sanctuary, which was quite a bonus. The baby couldn't eat banana peels like the adult elephants, so we had to peel the bananas before feeding him. 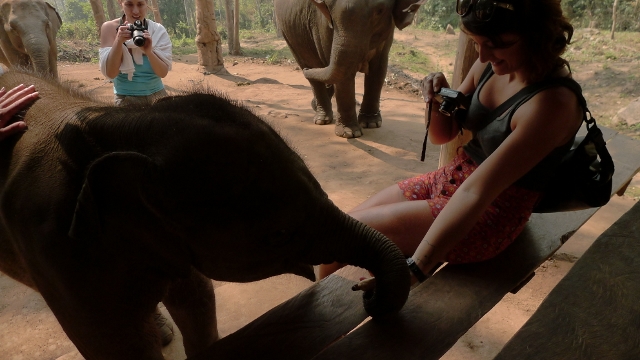 A "mahout" is a person who drives an elephant. Ran Tong provided us our own mahout outfits for the day. 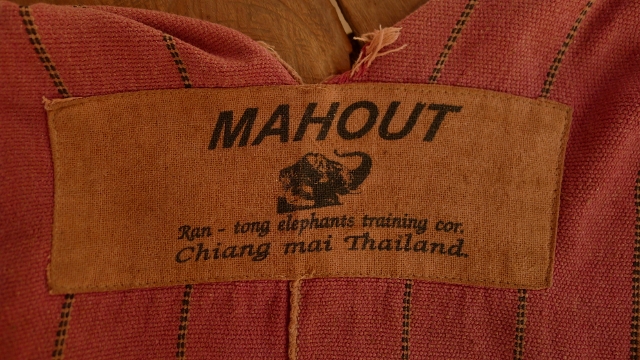 Before becoming mahouts, we had to learn some verbal commands to control the elephants. Monica and I cheated and wrote them on our hands in case we forgot them. 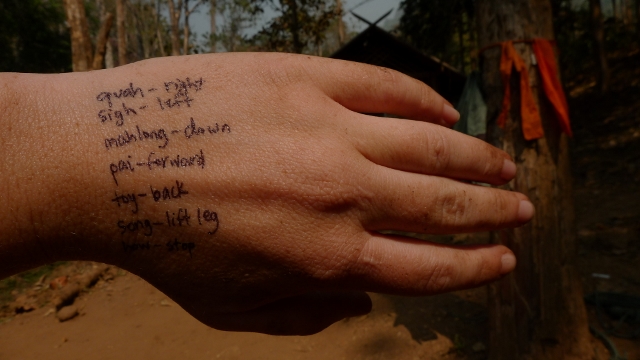 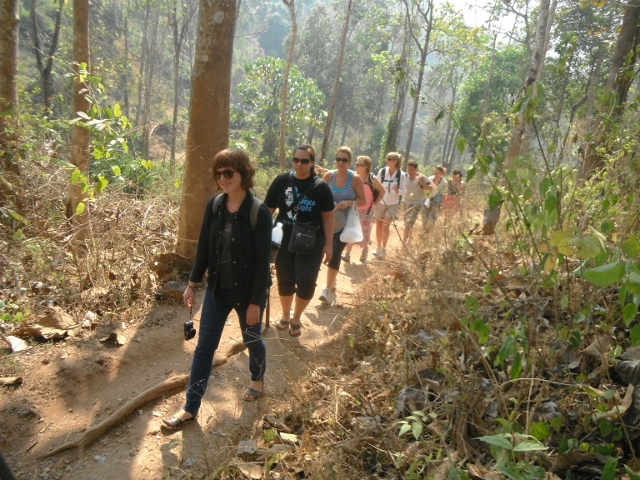 My elephant was the kiss-giver. This trick was so impressive. The elephant knew to put the end of her trunk right on your cheek, suck in air and then release. It was the craziest feeling and left you with an irreplaceable smile on your face. 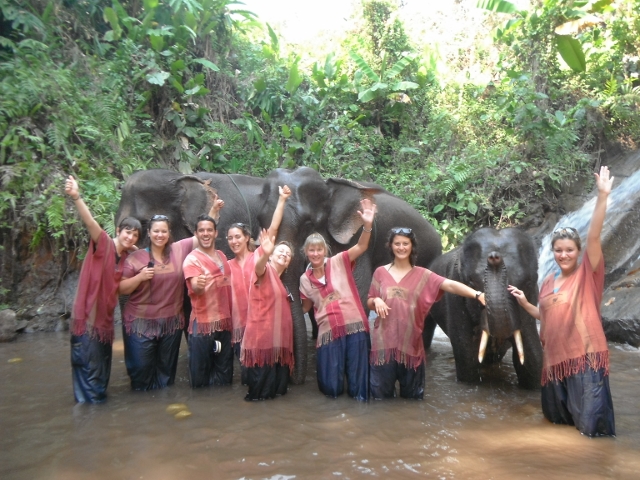 I feel like a fourth grader saying this, but elephants are now my favorite animals. They are intelligent and kind, and bond strongly with one another emotionally. All the females in a group take care of the babies, no matter whose babies they are, and all of the elders in a group take part in teaching the younger generations. They are the largest land animals on earth and are herbivores. When you see them in person, you can imagine them roaming the rain forests in large numbers thousands of years ago...

I will always remember the feeling of sitting on top of that elephant, trying not to fall off as she climbed up and down the hills and crossed through streams. Also the sound of the wooden elephant bells around their necks, gently clanking and creating a soothing atmosphere at the sanctuary. I hope to someday interact with these amazing creatures again.
by anne