Last Saturday I had the pleasure to be a guest at Slow Food's fresh food picnic, organized at the beautiful Ranchero Mark West farm tucked in the hills of Sonoma County. I would like to herewith extend my thanks to my two new awesome friends Jonathan Sutton and Tony Ferrari, chefs at Hillside Supper Club, a new slow food restaurant in Bernal Heights, San Francisco. I had a great time thanks to them and would like to share the moment and story with you all in this post.

A little bit about the "slow food" concept, which I had no idea what it was before attending this event, and most likely many of the readers of this post don't know about either: "slow food" started off in 1989 in Italy as a movement to counter the rise of fast food and fast life, the disappearance of local food traditions and people’s dwindling interest in the food they eat, where it comes from, how it tastes and how our food choices affect the rest of the world.

Slow Food is now a global non-profit organization with over 100,000 members around the world. It's mission is to link the pleasure of good food with a commitment to local community and the environment. The goal is to get people to eat healthy, organic, fresh food produced at small scale on local farms. I think more people should know about it and writing this blog post is my way of helping spread the word. The event took place at Ranchero Mark West estate in Sonoma County, a cute little farm in the hills, accessible by a cute windy and narrow road, like many in California. Driving up there we saw many deer on the side of the road, casually hanging out in-between people's houses. 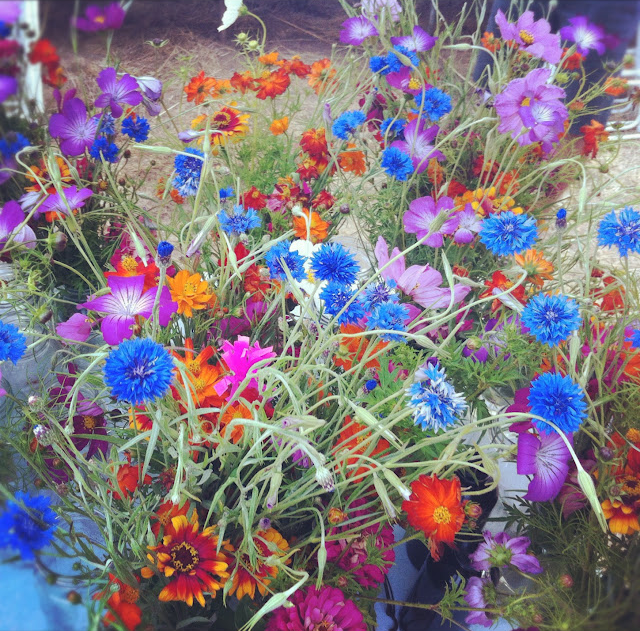 The flower arrangements on each table were absolutely gorgeous! At the end of the event we helped clean up and placed all flower jars together on one table, which is where I snapped this shot. I took some of them home with me and a now, a week later, they're still perky. 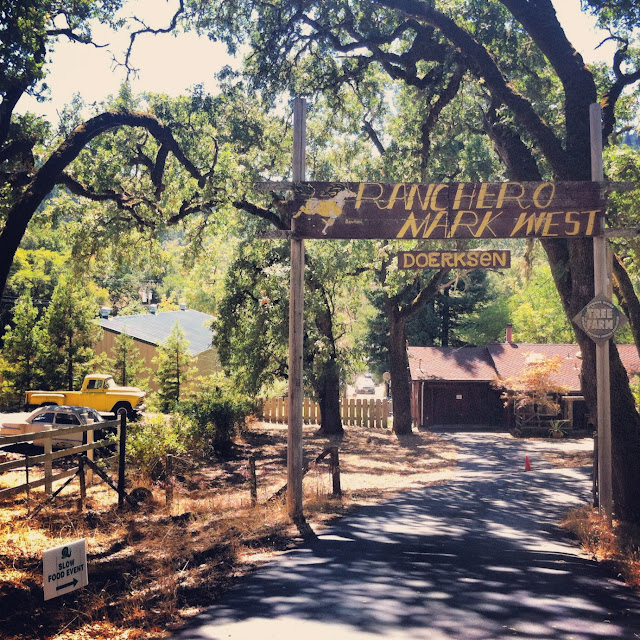 The entrance to the farm. The place was peppered with all sorts of artifacts, such as old cars and trucks, some of them completely rusted and unrepairable, vintage fire trucks converted into sinks for picnic goers, fire pits, cute wooden tables and benches, flower and herb gardens, etc. A magical playland for kids and adults alike. Speaking of kids, the place is now run by an environmental organization that plans all sorts of activities with kids, such as planting or picking vegetables, making preserves, etc. 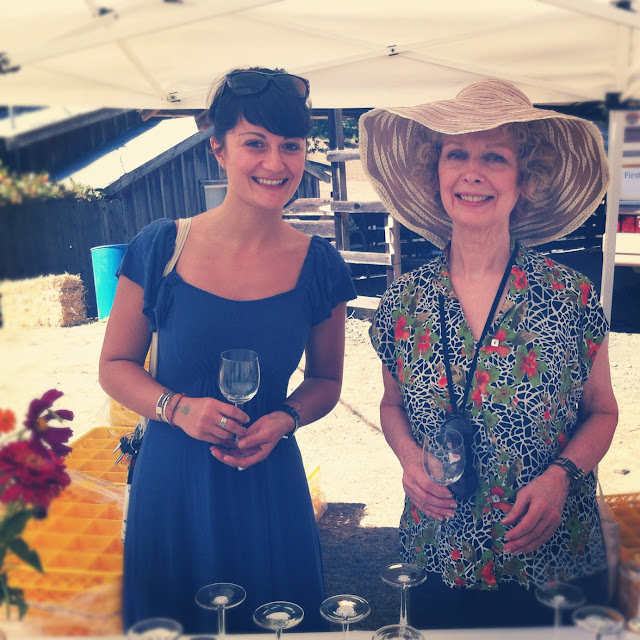 At the entrance I saw this fashionable lady with her beautiful hat and asked if I could take a photo of her. Then Jonathan took a photo of us together. 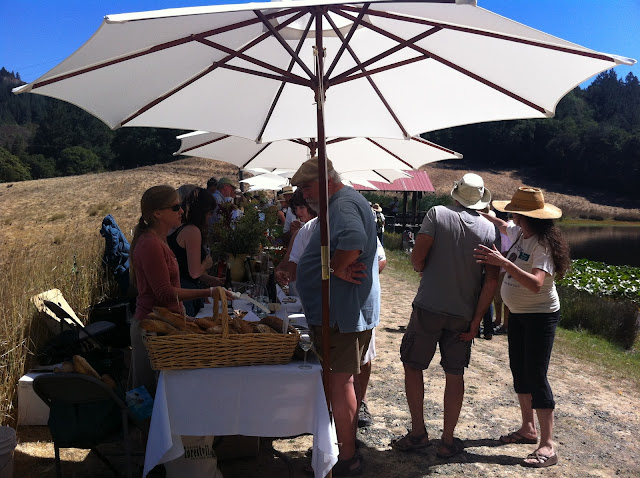 The morning started with a display/tasting of products made by local farmers, such as cheeses, wines, breads, hams, preserves, etc. Everything was out of this world delicious. Some of these farmers sell their products in select stores around San Francisco or directly to some high-end restaurants. 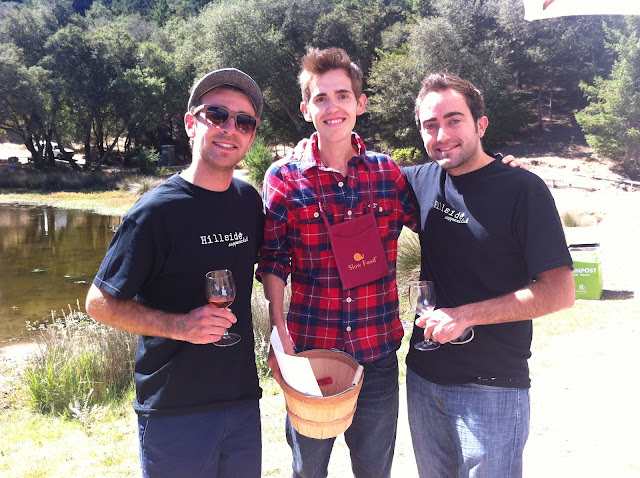 Jonathan, Austin and Tony, the three awesome lads that I spent the entire Saturday with. 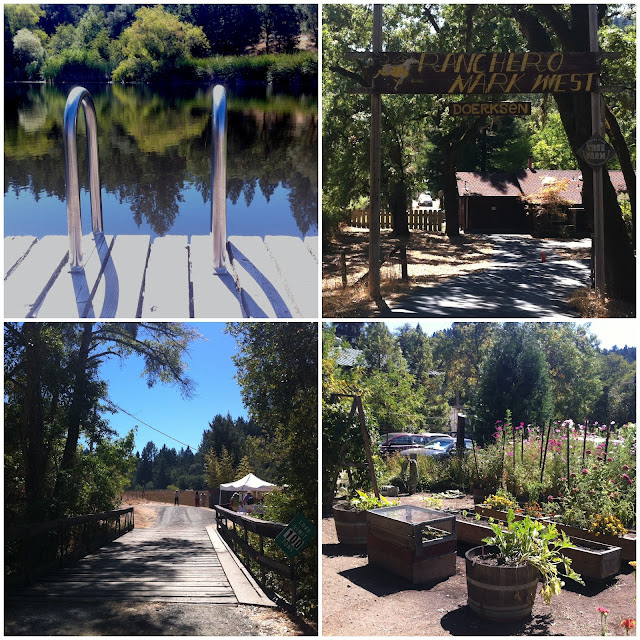 I made a little collage of how pretty everything on the farm was. There was also a little pond where people went swimming later. Not a surprise, given it was around 95 degrees outside. 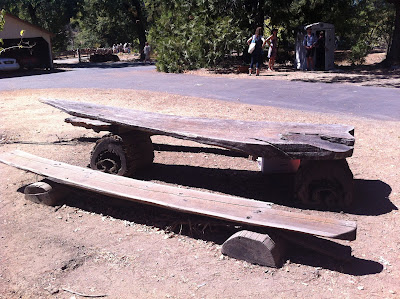 I really loved the organic feel of this table and benches. 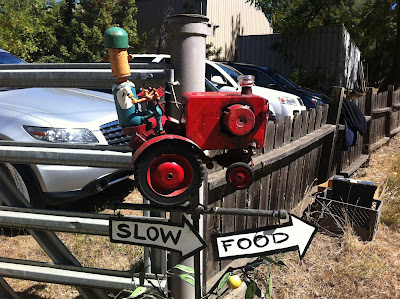 The road leading to the event had signs like this one pointing guests into the right direction. 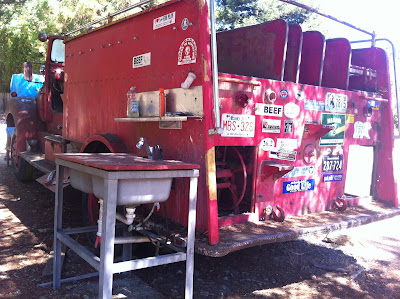 Vintage fire truck fueling water for the sink. What a cool idea! 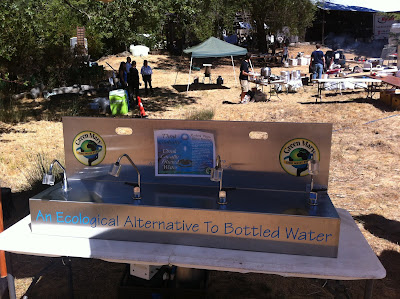 This device should be everywhere. 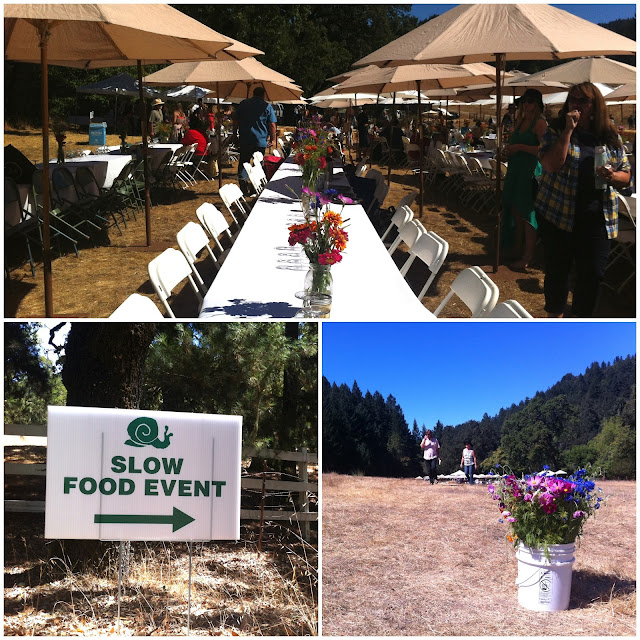 They set up tables for 400 guests. At the end we helped clean up, and boy was that a workout! 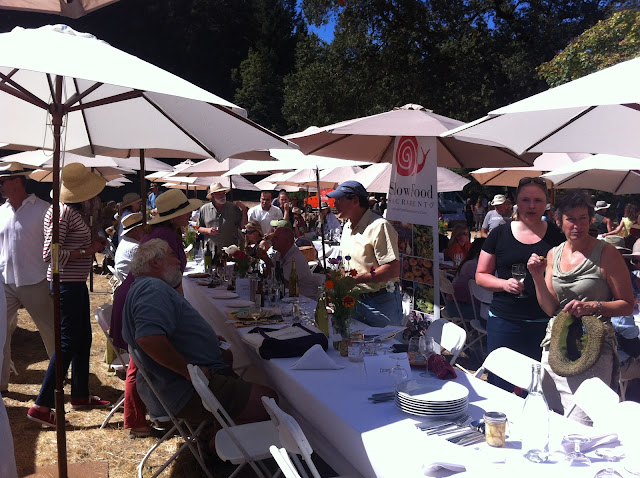 Our table at the event, courtesy of Jim Reichardt of Liberty Ducks. Jim raises some fine ducks, which I had the pleasure to try out one night at Hillside Supper Club. I usually avoid eating duck meat, especially at Chinese restaurants, but this is a completely different kind of duck. Tender and flavorful, it doesn't carry any of that nasty smell or extreme fat you get with duck in Chinese cuisine. 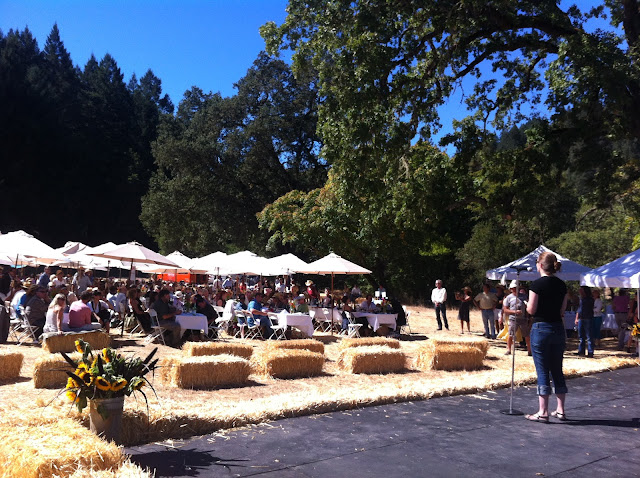 Then came the intermission with two quite epic speeches from Alice Waters and Carlo Petrini, the founder of the Slow Food movement. 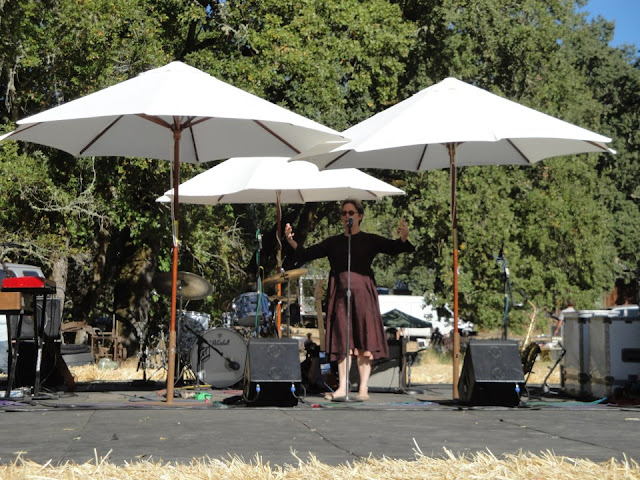 All I knew about Alice Waters was that she opened Chez Panisse, but until this day I had no idea she is such a powerful and inspiring public speaker. The key message of her speech was about introducing food education in schools, similar to how physical education was made mandatory during Kennedy's mandate. 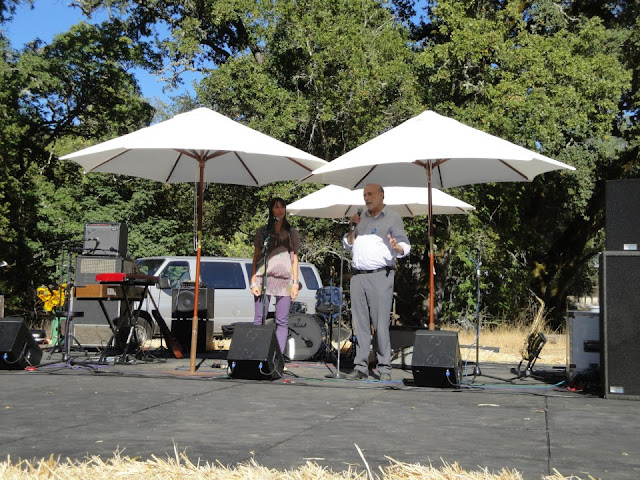 Their speeches made quite an impact on me. It was nothing I had not felt myself before, but it was eloquently put and quite motivational to see there are people out there fighting the good fight. 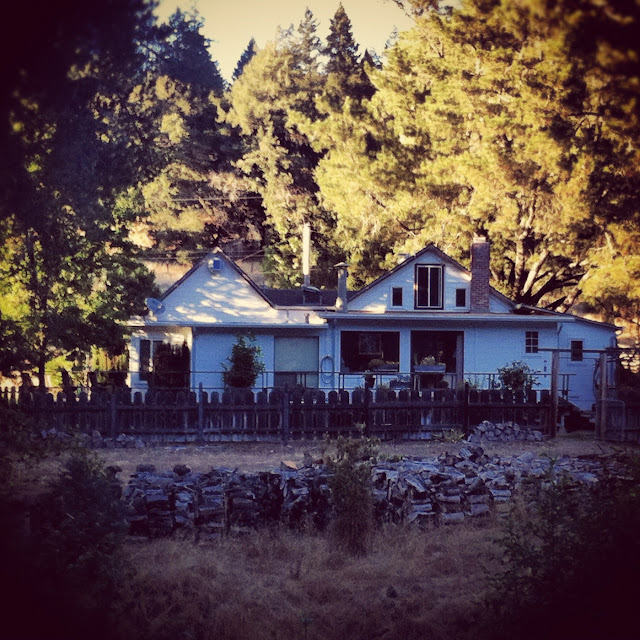 One of the several houses located on the property. I'd die to own a house and leave there. Dream life! 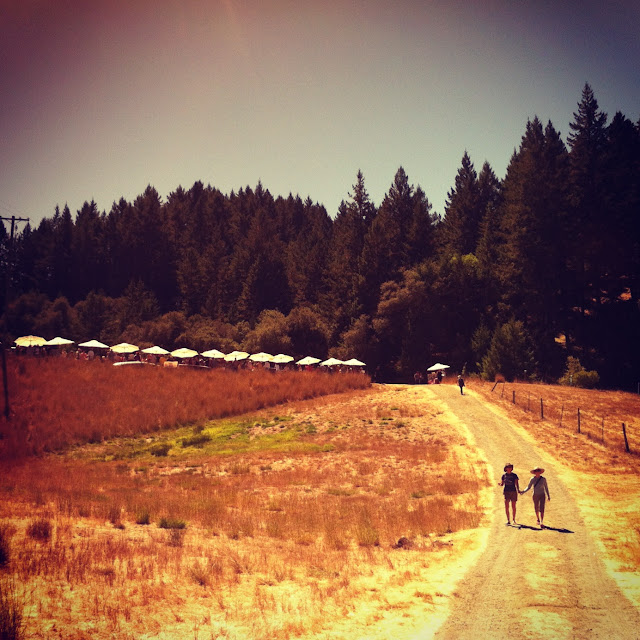 Shot through my sunglasses with no other filter.

I will conclude this blog post with a somewhat political call to action: if you live in California, make sure to vote for Prop 37 in November. It is our right to know where our food comes from and how it's been processed or genetically modified.
by Monica S.