Romanian Food, Probably The Best In The World

Ok, yes, I'm biased, because I am Romanian and my taste buds have been trained ever since I was a kid to love this food. But seriously - you have to try it and you'll know what I mean. Unfortunately, there are no Romanian restaurants in the Bay Area. It makes my heart break at the thought that San Francisco foodies are missing out on such an exquisite display of flavor. Given that we are fortunate to live in an area with easy access to almost any cuisine in the world, you name it, the lack of my own nationality's cuisine in the San Francisco's culinary landscape is a great loss. I secretly dream that one day I'll open up a Romanian restaurant. If you're a foodie, an investor and are reading this, hit me up! Chances are we might do business together.

I know that you're drooling at the photo below, so let me get down to the business of describing what these tasty-looking fellows are. 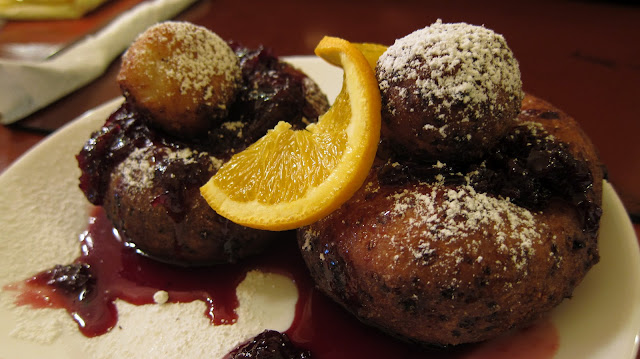 They are called papanasi and are a famous Romanian dessert. The dough is mixed with a soft creamy cheese, similar to ricotta. It is then deep-fried, holed in the middle and stuffed with sour cherry marmalade. It is served hot with a side of sour cream, which you can drizzle (or downright pour) on top of these things. It's probably a bazillion calories, but who cares... you gotta live once in a while. 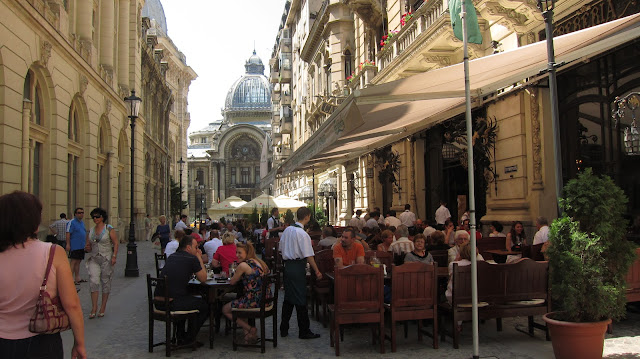 Above is one of the oldest and most popular restaurants in Bucharest. It's called Caru cu Bere and is located in the Old Town. It's been around for over 100 years and it has gorgeous paintings on the walls and ceiling on the inside. I didn't take any photos myself, because I've been there way too many times and I sort of take it for granted by now, but here's a photo gallery, to get an idea. The name of the restaurant means something along the lines: "The horse-drawn carriage full of beer." It's always packed, any day of the week and any time of the day, from early morning till late in the night. 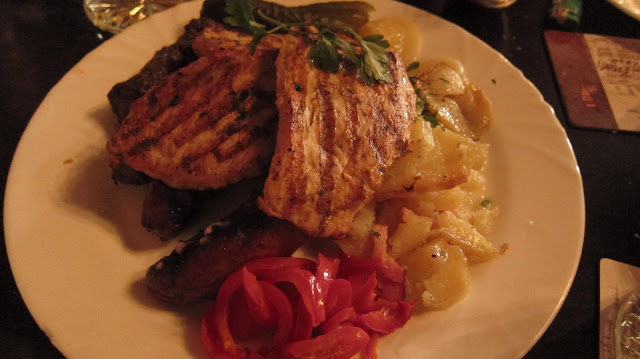 Above: my portion from a mixed grill we ordered. Grilled meat is just as important in Romanian cuisine as it is in Argentine or American. We grill the shit out of anything made of meat, but we never grill any veggies. I actually think there are no vegetarians in that whole country. Which reminds of a scene in the movie "Everything is Illuminated," where the main character, this young Jewish-American boy, goes to Ukraine to trace back his family that lived there before the Holocaust. He is served dinner one night by some distant relatives, but they only have meat dishes and he's vegetarian. Upon trying to explain to them that the doesn't eat meat, they look at him confused and exclaim: "What's wrong with you?" This is exactly the kind of thing my grandma would say. (Side note: the red veggies at the bottom of the image are bell peppers pickled in vinegar. Their texture and flavor go really, really, really well with steaks. One of my favorite things in the whole world.) 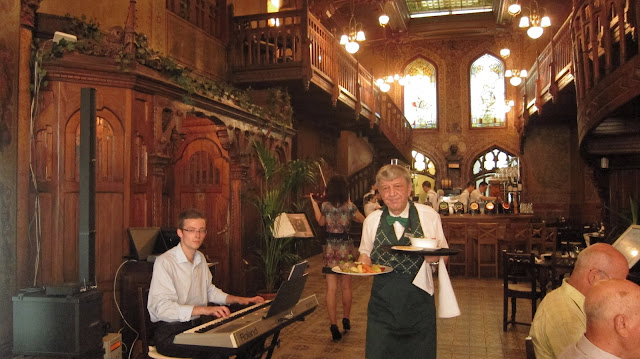 Inside the restaurant Caru cu Bere. I guess I took a photo after all. 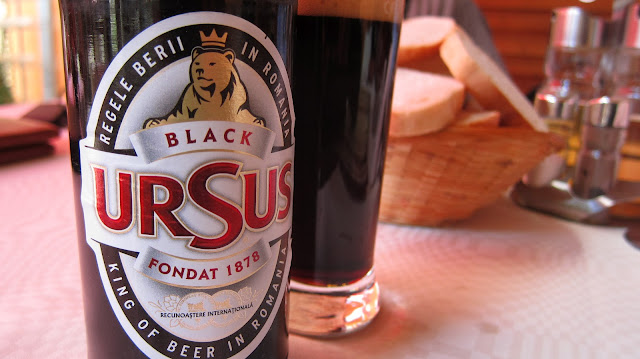 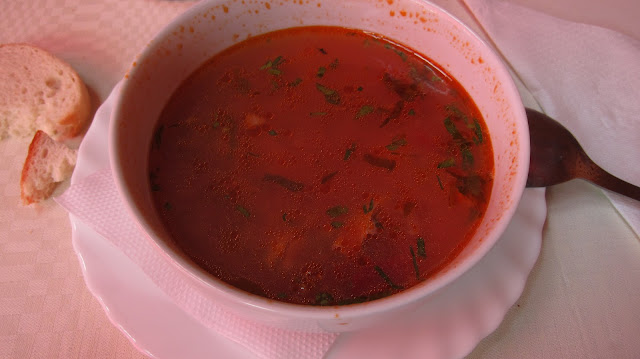 Ciorba de vacuta (beef sour soup) is again one of my favorites in the whole world. I should probably stop saying that, because it applies to almost everything in this post. Ciorba de vacuta is made of many veggies chopped up in small cubes and boiled together with small cubes of beef. At the very end, the souring agent is being added. In Romanian we call this souring agent "bors." The term was most likely borrowed from Russian, but it has nothing to do with the Russian "borscht." The Russian borscht is made of beets. The Romanian bors is a clear and extremely sour liquid obtained from pouring hot water over fermented wheat bran. It is actually packed with vitamin C and great to drink by itself. So, bors is poured on top of the beef soup at the very end of the cooking process, to give it its specific sour taste. (Side note: in many Southeast Asian countries tamarind is being used as souring agent for soups.) 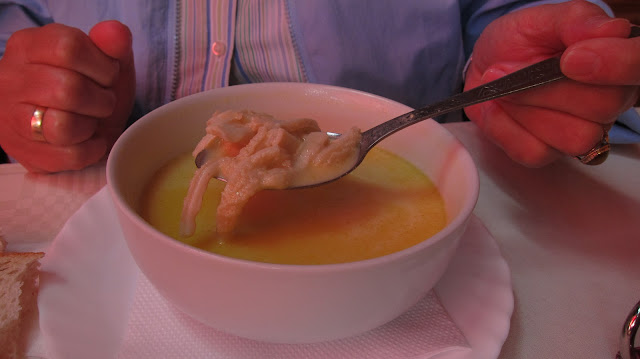 Ciorba de burta (tripe soup) is one thing I've never been able to get into. It's a sour soup packed with little slivers of beef stomach lining. 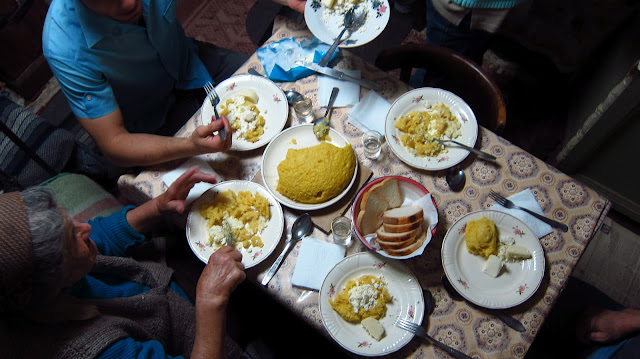 Mamaliguta cu branza (polenta with cheese) is a typical appetizer in the countryside. The food order is as follows: 1) polenta with cheese, 2) sour soup, 3) main dish (usually meat and a side), 4) coffee and cookies for dessert. The Romanian polenta is very different from the Italian version you might be used to getting at fancy restaurants. It is made of course ground corn, has a harder consistency and is cooked in an iron cast pot. In fact, peasants in Romania eat polenta every day, so they have a dedicated iron cast pot just for making polenta. Polenta is usually served with a salty sheep cheese called "telemea" and butter. It goes down best with generous shots of moonshine (plum brandy.) 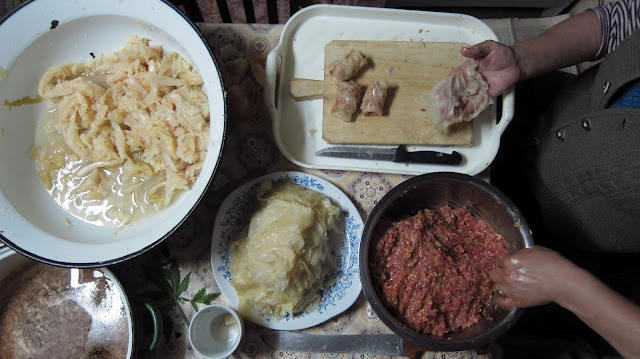 Sarmale de varza (minced meat rolls in pickled cabbage leaves). Above is my mom, starting to make about 200 of these rolls. Many Romanian dishes are very labor intensive, and I often feel bad for all the women who spend half of their waking life cooking up for their families. My mom is definitely one of those women, she works her ass off in the kitchen every day and always whips up the most delicious meals. The minced meat for "sarmale" can be either just pork, or a combination of pork and beef. My mom adds beef to make them "leaner" and "healthier," but I think they're tastier just with pork. You can also add smoked bacon for extra flavor. The meat mix also contains rice and condiments. The pickled cabbage leaves are carefully pre-cut to the right size, so that the sarmale are not too bulky. When they're ready, they are layered in pot as follows: one bedding of finely cut sauerkraut at the bottom, a layer of sarmale, then another layer of sauerkraut, followed by another layer of sarmale and so on... until the pot is full. The pot is filled with a water, oil and tomato sauce concoction and set to boil for a few hours. 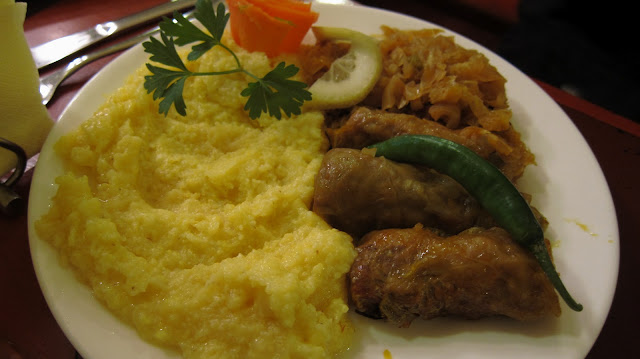 And this is how the end product looks like. 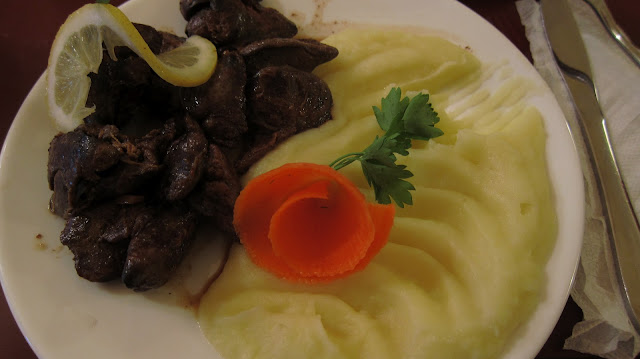 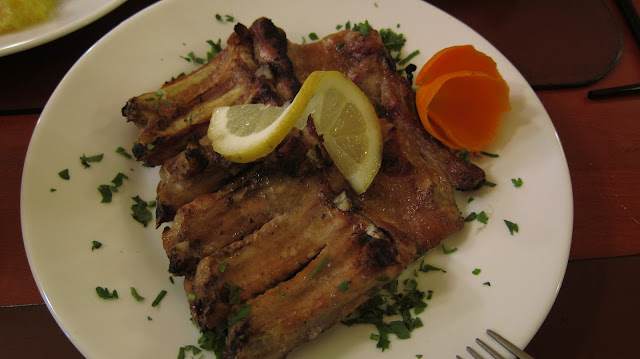 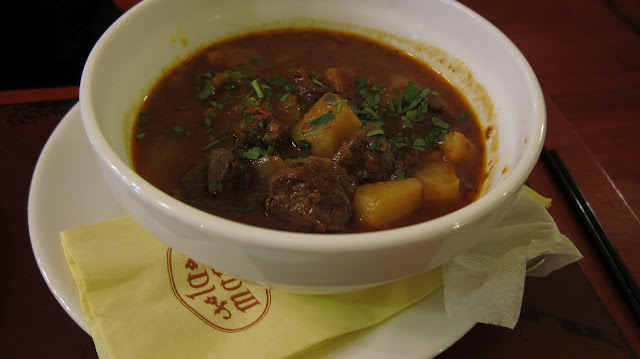 Goulash - a Hungarian stew that is also very popular in Romania. 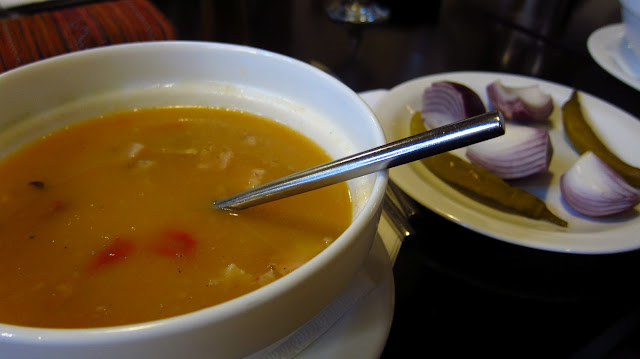 White bean soup with smoked ham and bacon. It's served with raw red onion on the side. This dish is probably the Romanian equivalent of "comfort food." There's nothing that tastes better than a hot bowl of this soup on a cold winter day. 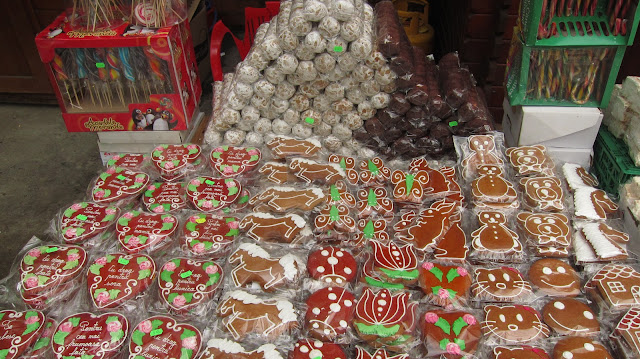 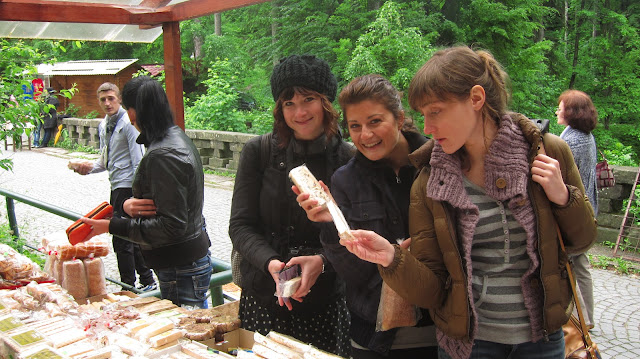 The two Annas and I were very excited about the candy selection. We went craaaaaazy! 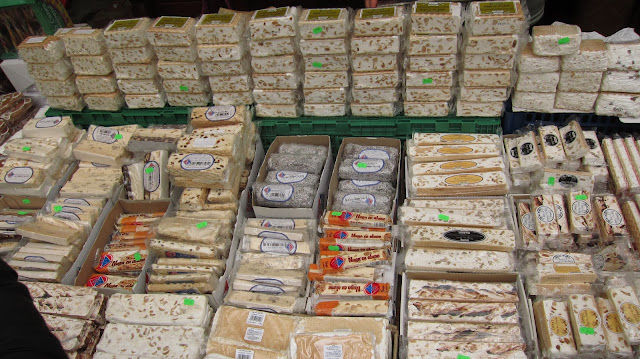 A great variey of halvas with all kinds of nuts and raisins.

I'd like to add that this blog post covers a very small selection of the amazing Romanian cuisine. It only covers some of the foods we ate while on this trip.
by Monica S.